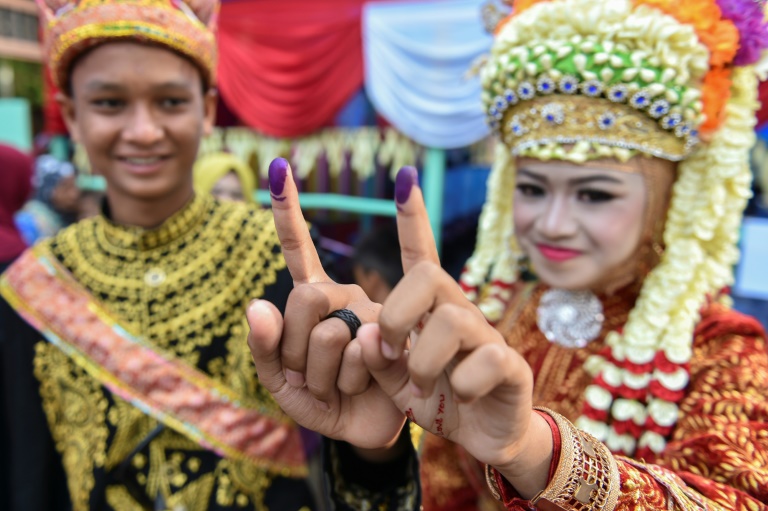 JAKARTA, April 17: Across 17,000 islands, from the jungles of Borneo to the slums of Jakarta, millions of Indonesians were going to the polls Wednesday in one of the world's biggest exercises in democracy.

Horses, elephants, motorbikes, boats and planes have been pressed into service to get ballot boxes out across the vast archipelago.

More than 190 million voters are choosing between an incumbent president lauded for his infrastructure projects and a fiery nationalist with links to a brutal dictatorship.

The call to prayer rang out across the 4,800 kilometre-long country, where almost 90 percent of the population are Muslim, as voting began at first light in restive Papua province in the east.

The campaign has been punctuated by bitter mudslinging and a slew of fake news online -- much directed at the presidential contenders -- that threatens to sway millions of undecided voters.

AFP / CHAIDEER MAHYUDDINHorses, elephants, motorbikes, boats and planes have been pressed into service to get ballot boxes out across the vast archipelago

Leading in the polls, President Joko Widodo, 57, has pointed to his ambitious drive to build much-needed roads, airports and other infrastructure across Southeast Asia's largest economy.

But Widodo, a political outsider with an everyman personality when he swept to victory in 2014, has seen his rights record criticised owing to an uptick in discriminatory attacks on religious and other minorities, including a small LGBT community, as Islamic hardliners become more vocal in public life.

His choice of conservative cleric Ma'ruf Amin as his running mate has also raised fears about the future of Indonesia's reputation for moderate Islam.

Widodo -- a practising Muslim who has battled doubts about his piety -- jetted to Mecca, the birthplace of Islam, for a brief, pre-election pilgrimage Sunday.

"His popularity is still up there... but he is not the inspiring figure that he was five years ago."

Raised in a bamboo shack in a riverside slum, the soft-spoken Widodo stands in stark contrast to rival Prabowo Subianto, 67, a strongman who has courted Islamic hardliners and promised a boost to military and defence spending.

Echoing US President Donald Trump, he has also vowed to put "Indonesia first" by reviewing billions of dollars in Chinese investment.

AFP / CHAIDEER MAHYUDDINOfficials are moving ballot boxes by motorbikes, boats and planes to reach mountaintop villages and communities deep in the jungle

Subianto's long-held presidential ambitions have been dogged by a chequered past and strong ties to the Suharto dictatorship, which collapsed two decades ago and opened the door what is now the world's third-biggest democracy.

He ordered the abduction of democracy activists as the authoritarian regime collapsed in 1998, and was accused of committing atrocities in East Timor.

Subianto -- who has moved to soften his image with an Instagram account featuring his cat Bobby -- insisted he was poised to pull of an upset victory, alongside running mate Sandiaga Uno, a 49-year-old wealthy financier.

"I'm very confident," he told throngs of reporters in vote-rich West Java after casting his ballot.

He narrowly lost to Widodo in the 2014 polls.

A record 245,000 candidates are running for public office, from the presidency and parliamentary seats to local positions -- the first time all are being held on the same day.

At 7:00 am (2200 GMT) voters began punching holes in ballots -- to make clear their candidate choice -- and then dipping a finger in Muslim-approved halal ink, a measure to prevent double-voting in a graft-riddled country where ballot-buying is rife.

About two million military and civil protection force members were deployed to ensure the vote goes smoothly, including in mountainous Papua where rebels have been fighting for decades to split from Indonesia.

Papua election officials dressed in traditional headgear and grass skirts, as others strap on superhero costumes to entertain voters in other parts of the country.

"I'm very happy I can still cast my vote at this old age," 79-year-old Suparni, who goes by one name, told AFP at a polling station in Papua's Merauke city.

"But it's very confusing because there's so many ballot sheets."

A series of so-called "quick counts" are expected to give a reliable indication of the presidential winner later Wednesday. Official results are not expected until May.

Some delays were reported as things got up and running in the country of more than 260 million people, which is home to hundreds of ethnic groups and languages.

"This only happens once in five years, so we have to exercise our (voting) rights," I Gusti Ketut Sudarsa, 65, said from holiday hotspot Bali.

"This will determine the path of our nation."

JAKARTA, May 9: A top Indonesian lawmaker has demanded a parliamentary inquiry into the deaths of more than 500 officials... Read More...

JAKARTA, Dec 27: Indonesia on Thursday raised the alert level for the erupting Anak Krakatau volcano to the second-highest, and... Read More...