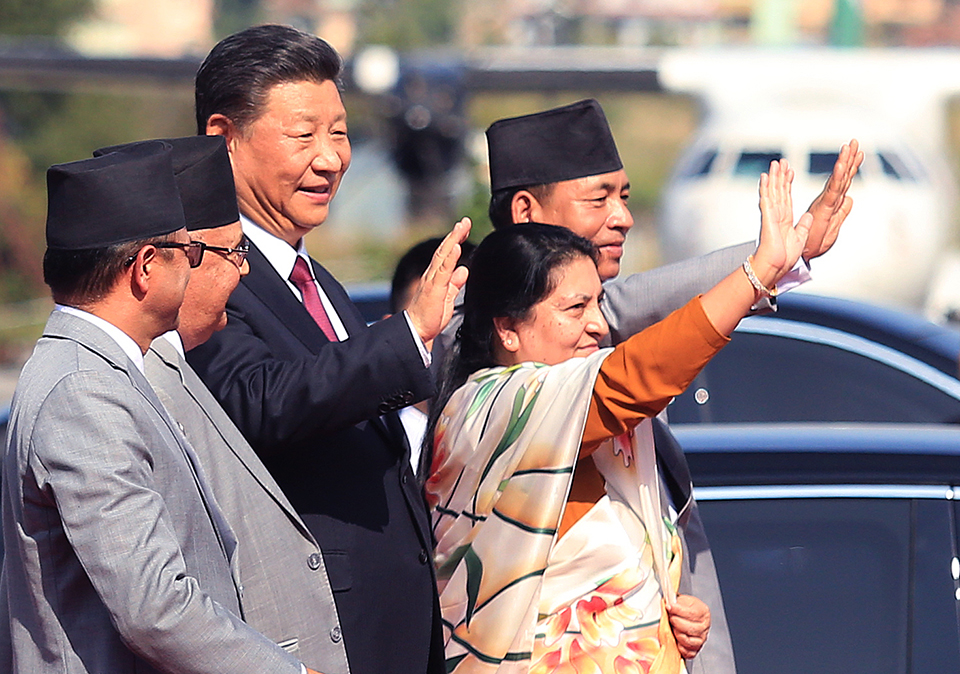 Two countries to enhance connectivity as Xi wraps up visit

KATHMANDU, Oct 14: Elevating their relationship to the level of “strategic partnership,” Nepal and China have agreed to intensify implementation of the Memorandum of Understanding (MoU) on cooperation under the Belt and Road Initiative (BRI) to enhance connectivity. The agreement was reached during the two-day state visit of Chinese President Xi Jinping to Nepal.

The two countries agreed to enhance connectivity that includes vital components such as ports, roads, railway, aviation and communications within the overarching framework of the Trans-Himalayan Multi-Dimensional Connectivity Network, according to the 14-point joint statement issued after the wrap up of President Xi’s visit to Nepal on Sunday. The agreement between the countries comes in the wake of concerns that none of the projects under the BRI had seen any tangible progress in their implementation despite Nepal deciding to be a part of the ambitious Chinese initiative in early 2017.

In a bid to expedite construction of cross-country railway, Nepal and China signed an MoU on Sunday to conduct feasibility study in line with the previous MoU signed between the two countries on June 21, 2018. While stating that the feasibility study will lay an important foundation for launching the construction of a cross-border railway, the two countries, according to the joint statement, have “reiterated their commitment to extend cooperation on Kathmandu-Pokhara-Lumbini Railway Project.”

While welcoming the reopening and restoration of the freight function of the earthquake-ravaged Khasa port, they also agreed to optimize the functions of Kerung port and opening of Lizi/Nechung port at the earliest to ensure improved road connectivity with China. Agreement to bring into implementation the Protocol concerning the Utilization of Highway in Tibet, China, by Nepal for cargo transport and the Protocol to the Agreement on Transit Transport was also reached between the two sides.

“On the basis of maintaining the long-term operational condition of the Araniko Highway, both sides agreed to cooperate on upgrading and reconstructing the highway on a priority basis in a step-by-step manner,” reads the joint statement.

China also expressed readiness to initiate the repair of the Syphrubesi-Rasuwagadhi Highway as per the request of Nepal and proactively cooperate on the feasibility study for the construction of tunnels along the road from Kerung to Kathmandu. China also agreed to consider the construction of Kimathanka-Leguwaghat section of the Koshi Highway in future cooperation and undertake study on the possibility of cooperation for the development of three north-south corridors, namely Koshi Economic Corridor, Gandaki Economic Corridor and Karnali Economic Corridor.

As per the agreement reached between the two sides, airlines of both the countries will now be encouraged to operate more direct flights.

In addition to its support to the enhanced connectivity, China also agreed to enhance cooperation in the fields of education, culture and people-to-people contacts.

China has offered to extend support for the multidisciplinary Madan Bhandari University for Science and Technology at the earliest after the Nepali side chooses a suitable site for its establishment.

“Both sides will continue their discussion on the basis of the report to be submitted by the site visit working group of the Chinese side,” the statement said.

On the security front, the two countries signed the Treaty on Mutual Legal Assistance in Criminal Matters during Xi’s visit. Although the Chinese side wanted an Extradition Treaty, the countries could not reach any agreement on this issue as the Nepali side conveyed that this needed additional homework.

The two countries, however, have agreed to strengthen cooperation between the law enforcement agencies on information exchanges, capacity building and training. In the next three years, China will offer 100 training opportunities to the Nepali law enforcement officers each year and strengthen cooperation in the exchange of visits of the security personnel, joint exercises and training and disaster prevention and reduction.

Earlier, President Xi and Prime Minister KP Oli witnessed signing and exchanging of various 20 instruments to further strengthen cooperation between the two countries under the framework of BRI.

The joint statement states that both Nepal and China recognize BRI as an important opportunity to deepen mutually-beneficial cooperation in all fields in a comprehensive manner. “Both sides on the basis of the Five Principles of Peaceful Coexistence, Charter of the United Nations and principles of good neighborliness, decided to elevate Nepal-China Comprehensive Partnership of Cooperation featuring ever-lasting friendship to strategic partnership of cooperation,” reads the joint statement.