Nepal, Bhutan to fight for gold under different aspirations 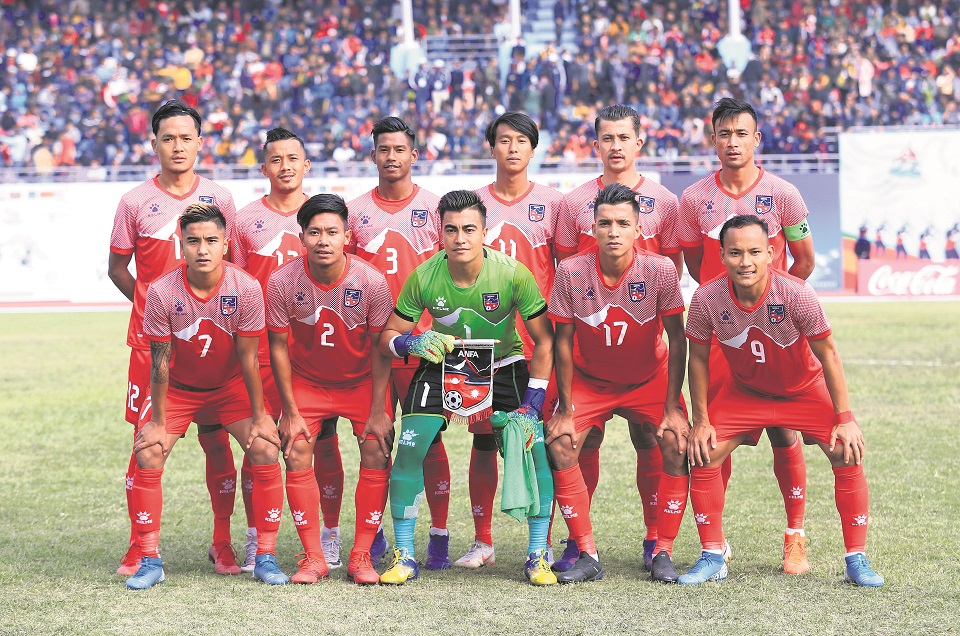 KATHMANDU, Dec 10: When Nepal takes on Bhutan in the final of the men’s football competition of the 13th South Asian Games (SAG) on Tuesday, it will be aiming to win the fourth SAG gold and two on the trot with a win against Bhutan.

Only Pakistan has won four SAG golds in men’s football as of now, and the defending champion Nepal is looking to its 2016 edition title charge to claim the gold yet again, to become only the third team to win the competition in a row.

The performance has been decent so far, with the emphasize on the wingers largely based on forward Abhishek Rijal and Sunil Bal. However, the imbalance in the midfield of Tej Tamang and Mikchen Tamang, who have not been able to create the chances from the midfield areas and have been isolated a lot.

The midfield two have been largely deployed at breaking down the attacks of the opponent teams, with Sujal Shrestha, being played as a second striker and asked to drop down in the midfield to hold the ball and give the ball to the forwards Bal and Rijal.

The midfielder turned center back Bikram Lama with his defense partner Ananta Tamang have been pretty solid at the back allowing only two goals which came in a 1-1 draw against Sri Lanka and a 2-1 win over the Maldives.  However, the expectations of the fans have only risen with dominative performances against Bhutan in its first group match, and also on some patches against the Maldives. The decisive performances from Rijal and Shrestha, who scored scored two against Bhutan and added one against the Maldives, have come as a surprise for fans.

Rijal had been just a backup under head coach Johan Kalin for the senior team, however, he has been a pivotal part of Nepal’s title charge at the SAG under Bal Gopal Maharjan.

Nepal and Bhutan will go head-to-head for the gold battle, with the away team awaiting its first gold of the SAG, which can also be the very first men’s football gold if it stuns the host.

But, considering the fact that Bhutan had never reached the SAG final gives an advantage for Nepal. The host also has the advantage of the home crowd as teams have found difficult to cope with the Nepali faithfuls loud jeers.

The Nepali fans abused the Sri Lankan players for their physical game, and some players also reacted to it. Bangladesh was left frustrated with missed chances and was made anxious with the loud cheers for the home team.

However, Nepal has a pretty good result in the tournament so far winning three matches and drawing one, while Bhutan has won three, but lost against Nepal.

The Tuesday’s final, however, will be shallowed by the fact that both India and Pakistan did not want to participate this time. India’s participation would not have made Nepal’s life easier with recent losses against the South Asian heavyweight. However, Nepal had defeated India to win the 2016 SAG gold.