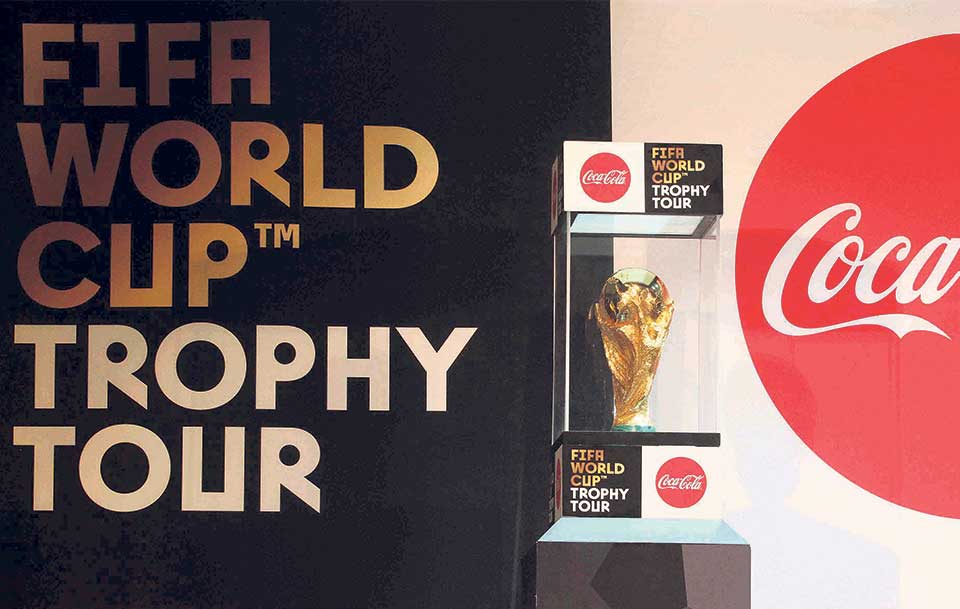 The World Cup trophy in displayed in Colombo, Sri Lanka in this file photo. Photo: Republica

COLOMBO, Jan 28: The last Wednesday morning brought a special excitement for Sri Lankan footballers- male or female. There was no training like any other day. A rare opportunity for football lovers was waiting for them in Colombo’s Independence Square. They got to see the trophy and feel the goosebumps they wouldn’t be winning any time soon.

“We couldn’t sleep all night” expressed Sri Lanka’s national football team forward Nipuna Bandara. “It is a dream come true to see the World Cup trophy up-close. We are with the world’s biggest sporting trophy.”

The trophy was not the only exciting thing waiting for them in the morning. The Sri Lankan football team got an opportunity to share thoughts and click photos with the 1998 world cup winner French player Chritian Karembeu. The world cup trophy arrived in Colombo on Wednesday a day late after the flight from London was delayed due to bad weather. The President of Sri Lanka Maithripala Sirisena was set to inaugurate the trophy tour but the plans were changed after the delay. Sri Lankan Prime Minister Ranil Wickremesinghe officially inaugurated the world tour of FIFA World Cup Trophy from Colombo on Wednesday.

“Even if we cannot win this but we got this opportunity to see this from close quarters and clicked photos that well stay us forever in our lives,” said an emotional Nipuna Bandara after the inauguration. This is a moment that marks a new craze for the Sri Lankan sports. Football only comes after much popular and vastly successful cricket followed by Rugby and Baseball in the country. “This has to be one of those proud moments in history of our sports for players who are undermined even in the country for choosing the comparatively less popular sports” quoted Hishan Welmilla, the senior sports journalist.

“Cricket is like religion in this country. The pride of the nation. Our national team is struggling right now but they are working hard and will get back to the winning ways,” said Aruna, a taxi driver on our way to the Independence center. She simply rejected the invitation to see football’s ultimate trophy. “I’m not interested. I don’t like football. Our sport is cricket”, she said.

More than 1000 supporters were present at the local conference center as Karembeu shared his experiences during his title-winning campaign with France. South Asian nations India, Bhutan, Nepal, and Bangladesh are not included in this year’s destinations for trophy tour. The same countries were included in the list of 77 in last World Cup trophy tour when Brazil hosted the marquee football tournament.

The 18 carat gold plated, 36.8 centimeter high and 601.75 kgs heavy trophy was first inaugurated in 1974 and has the names of all the winners imprinted on it.

Coco-cola’s Debabrata Mukherjee highlighted the importance of such tours for a nation like Pakistan or Sri Lanka where football is less popular and overtaken by other sports like cricket. “The kids that have come today in this program will get to feel the excitement and passion for football. They will start following the sports and maybe play too. And some of them might make it to the international stage”, shared Mukherjee during the ceremony.

The world cup winner Karembeu was not any less emotional or passionate for the program to see the love for the game and support that South-Asian countries like Sri Lanka had. Russia is set to host the biggest world sports event this year. Karembeu believes Brazil and France are the top contenders for the trophy. He has a message for Sri Lanka and South-Asia, “Football is not a property of any class, country or social order, this is for the whole world. The world cup trophy represents so many dreams and sacrifices by peoples related to it. Love football. Play football. One day you will be able to win the world cup and lift this trophy.”

U-23 football teams of Nepal, Bangladesh to play friendly

KATHMANDU, Sept 26: The Dashain Festival creates an image of animal slaughter in our mind as this is taken as... Read More...