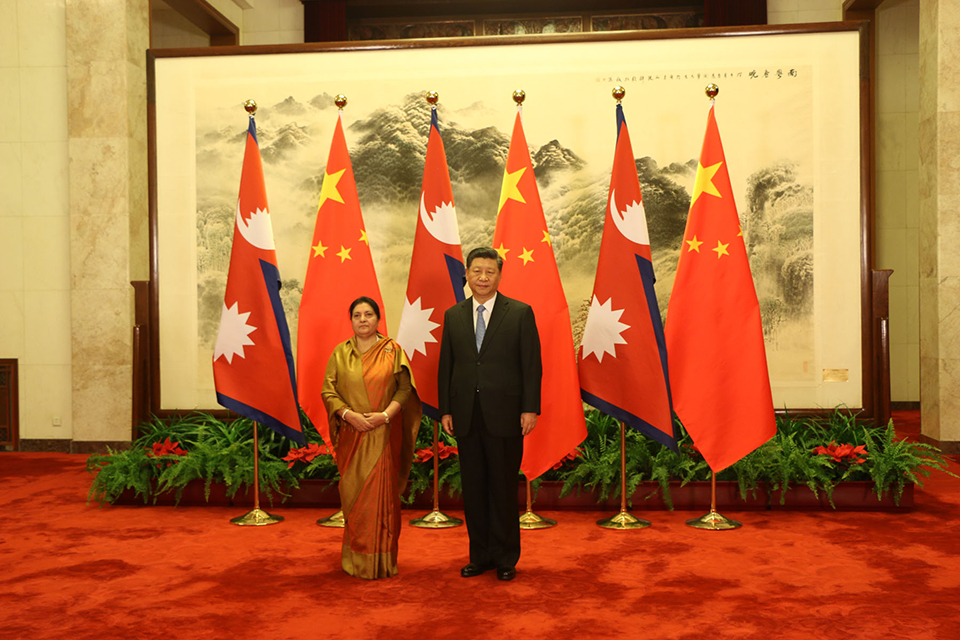 BEIJING, April 29: Visiting President Bidya Devi Bhandari held a bilateral meeting with her Chinese counterpart Xi Jinping at the Great Hall of the People on Monday. The bilateral meeting followed a signing ceremony on various agreements between the two countries.

A memorandum of understanding on exchange of cooperation was signed between Nepal Bureau of Standards and Metrology and Standardization Administration of China. Nepali Ambassador to China Lilamani Paudyal and Chinese Ambassador to Nepal Hou Yanqui signed the agreement on behalf of their respective countries. Ambassador Paudyal also signed together with Liu Yuzhu of Administration of National Cultural Heritage of China on an agreement to ban theft of cultural asset, secret exploration and illegal import and export.

Earlier, during the bilateral meeting, President Bhandari thanked President Xi for the welcome accorded to her and members of her entourage, while also extending an invitation to him for a visit to Nepal. Lauding the statement by President Bhandari in the second Belt and Road Forum for International Cooperation, Chinese President Xi said he looked forward to giving a new height to the historical relations between the two countries.

Earlier, upon arrival at the Great Hall of the People premises, Chinese President Xi welcomed President Bhandari. On the occasion, President Bhandari received a gun salute and guard of honour from a contingent of the Chinese Army. This was preceded by playing of the national anthems of both the countries. At the invitation of her Chinese counterpart, President Bhandari arrived here on April 24 on a nine-day State visit of China.

Also present on the occasion were Foreign Minister Pradip Kumar Gyawali, Chief Minister of Province no. 3 Dormani Paudel, Nepali Ambassador to China Lilamani Paudyal and other members of the President's entourage. RSS