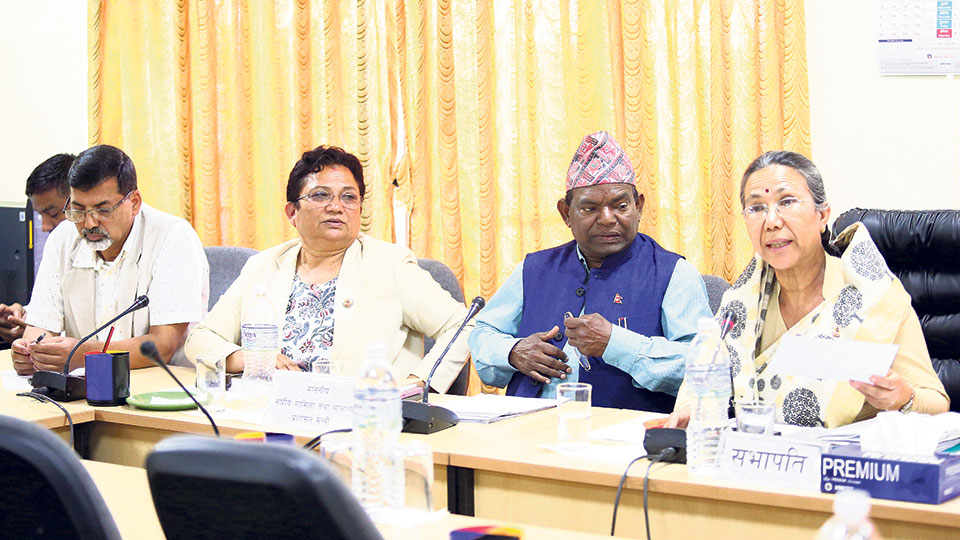 KATHMANDU, June 13: A year after unification between the two communist allies-- CPN-UML and CPN (Maoist Center)— and formation of the Nepal Communist Party (NCP), lawmakers of the ruling NCP are sharply divided along UML and Maoist lines over disputed bills and key issues of national importance.

During deliberations in the full House and at committee meetings, NCP lawmakers with UML background have supported the bills tabled by the government in parliament while ruling party lawmakers from a Maoist background have opposed the bills. The division in the ruling party has surfaced as some of the bills including those on a proposed media council, National Human Rights Commission, advertisements, National Security Council and Guthi land have drawn widespread criticism.

Similar division was seen over a parliamentary committee directive to scrap the vacancies announced by the Public Service Commission (PSC) .

NCP Chairperson Pushpa Kamal Dahal has also expressed his dissatisfaction over the controversial bills, most of them registered by MPs representing the former UML. “There should have been proper consultations with stakeholders over the proposed new bills before registering them in parliament," Dahal told journalists in Chitwan on Wednesday.

NCP lawmaker and former Maoist Anjana Bishunkhe, while airing her views in parliament on Wednesday, criticized Minister for Federal Affairs and General Administration Lalbabu Pandit for not agreeing to scrap the PSC vacancies. But NCP lawmaker Mahesh Basnet, formerly of UML, defended the minister.

The division was also clearly visible at the meeting of the State Affairs Committee (SAC) of parliament on Monday. Lawmakers of Maoist provenance strongly demanded that the Public Service Commission scrap the vacancies it advertised for various local units while lawmakers of UML background lobbied for a moderate decision instead of issuing a directive to scrap the vacancies.

Former Maoist ministers Janardan Sharma, Pampha Bhusal and Rekha Sharma were among those demanding the scrapping of the PSC vacancies while other NCP lawmakers including Bijay Subba, Jhapat Rawal and Nawaraj Silwal, who are of UML background, suggested taking an alternative decision .

Similarly, most of the lawmakers criticizing the Guthi (trusts) bill, which was registered in parliament by a minister of UML background, are former Maoists. While NCP lawmakers including former Maoist Pampha Bhusal spoke against the bill, most lawmakers from the UML faction ( except Krishna Rai) remained silent.

Leaders close to Prime Minister K P Oli, who is also NCP chairperson, have grown suspicious as the former Maoists have started registering their differing views on critical issues just a few weeks following Chairperson Dahal's critical remarks in a television interview. The two sides grew suspicious of each other when Dahal spilt the beans about “a secret agreement” between Oli and Dahal about heading the government and the party. Dahal said he is expecting Oli to hand over the leadership of either the government or the party as per the spirit of the agreement reached between them.

The same scenario played out in a debate on the controversial Media Council Bill, which was registered by Minister for Communication and Information Technology Gokul Baskota, a confidant of Oli's. Lawmakers and leaders of UML background remained mum over the issue while the former Maoists were vocal that the bill should be revised. Even journalists close to the former Maoist party took to street protests against the bill while those close to UML have tried to avoid public functions protesting it.

Earlier, most former Maoist leaders were critical of the use of the words 'my government' by President Bidya Bhandari while presenting the government's policy and programs in parliament. Agni Sapkota, who is close to Dahal, criticized the policy and programs for lacking vision for curbing corruption and preserving public lands.

According to top-level political sources, the Dahal and Oli faction leaders are also divided over whom to appoint as chiefs of the transitional justice bodies. As the former rebel Maoists didn't agree to naming Gobinda Bandi as head of the Truth and Reconciliation Commission as proposed by former UML leaders, the ruling party has failed to finalize the names of those who will head these two bodies.

KATHMANDU, June 9: In a rare occurrence in parliamentary practice, lawmakers have registered amendment proposals to a disputed advertisement-related bill without... Read More...