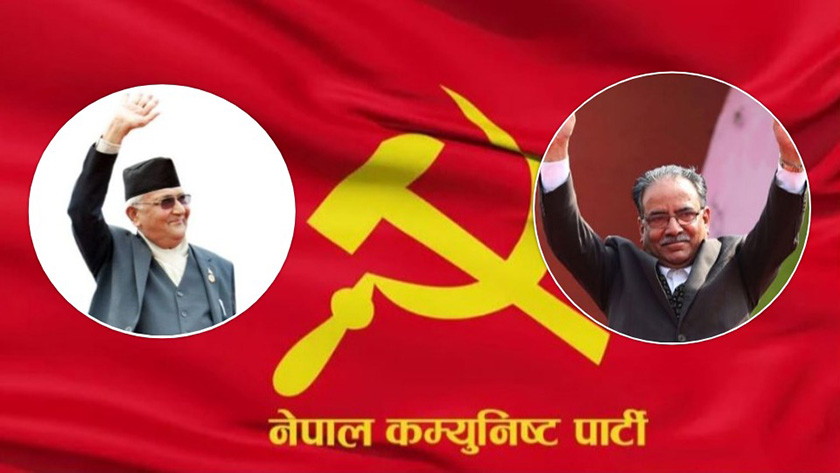 A section of leaders in the party, however, are not happy with the recent decision. Leaders loyal to Madhav Kumar Nepal had been demanding that the party secretariat's decision to nominate chiefs and secretaries should be endorsed from the party's central committee meeting.

KATHMANDU, April 23: Unification of the Nepal Communist Party (NCP) concluded Monday with the naming of the chiefs and secretaries for the party's 77 district committees. It took nearly a year to complete the unification of the party that was formed in May last year merging the then CPN-UML and CPN (Maoist Center) into one.

Leaders had pledged to complete the unification process within three months from the date of announcement. But it was prolonged for months after the leaders engaged in bitter disputes in their attempt to appoint those loyal to them as district chiefs.

The remaining district committees are headed by former UML leaders. Addressing the district chiefs announcement function in the capital on Monday, NCP Chairman Pushpa Kamal Dahal said the party unification process has come to an end by resolving daunting challenges.

“Unification concludes here. We should now build a dynamic party,” announced Dahal addressing leaders and cadres gathered at the City Hall in Kathmandu to welcome the unification process.

Dahal said the convention of district committees will be concluded in seven or eight months and the party's general convention will be held in a year. While announcing party unification, leaders have pledged to complete the unification of party rank and file within three months.

Another chairman of the party, Prime Minister KP Oli said the party won't split as some people have been predicting. 'Formation of this party was not a mere coincidence. It has been formed with the realization of a huge responsibility of developing the country,” said Oli.

A section of leaders in the party, however, are not happy with the recent decision. Leaders loyal to Madhav Kumar Nepal had been demanding that the party secretariat's decision to nominate chiefs and secretaries should be endorsed from the party's central committee meeting.

KATHMANDU, April 22: Nearly a year after the announcement of party unification, the top leaders of the ruling Nepal Communist Party... Read More...