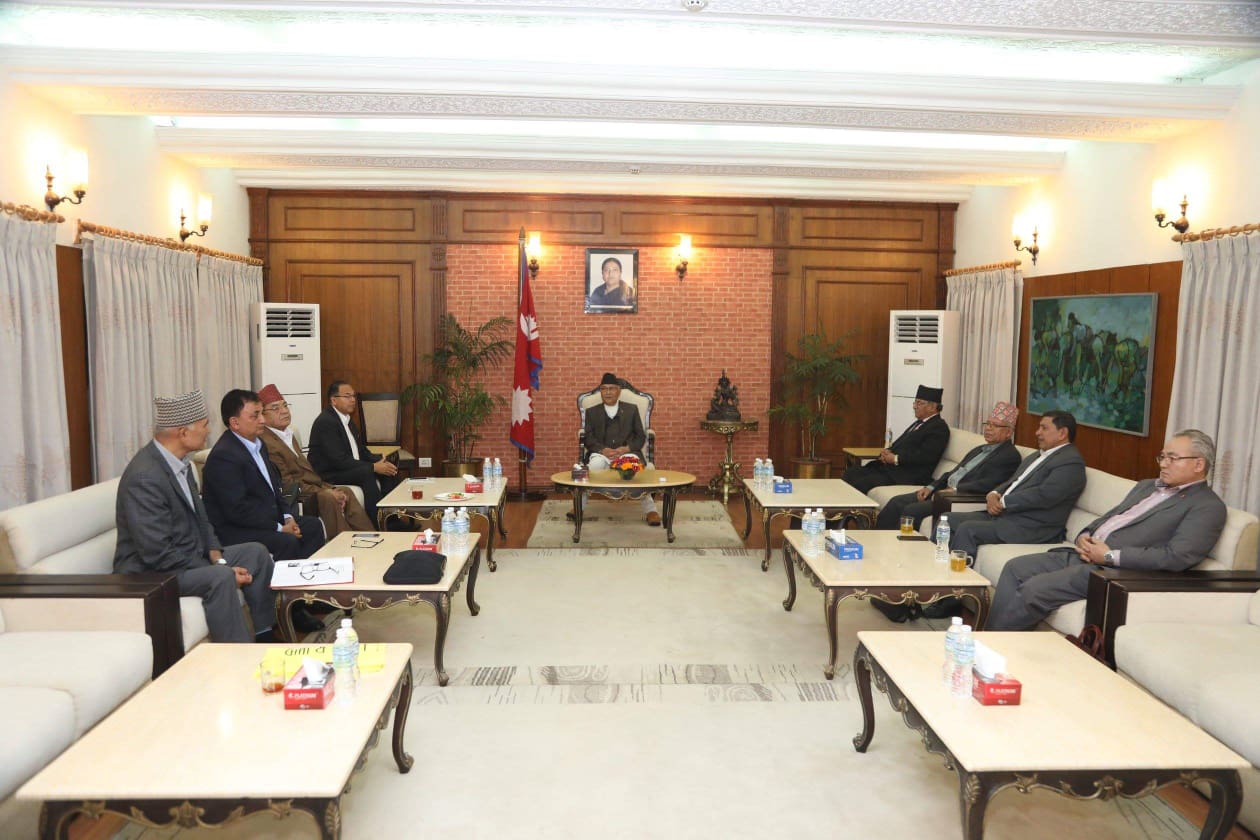 Leaders of the erstwhile Maoist party to be named chiefs of 32 district committees, the secretaries of these committees will be former UML leaders.

KATHMANDU, April 22: Nearly a year after the announcement of party unification, the top leaders of the ruling Nepal Communist Party (NCP) have finalized the chiefs of the party's lower committees. However, the issues of determining the responsibilities of the party's central leaders and deciding the leadership of its sister wings could not be settled "due to the lack of homework."

A meeting of the party's central secretariat held in Baluwatar endorsed the names of the chiefs and secretaries of the district committees. The decision follows a series of meetings among the top party leaders in recent weeks. The move is expected to "revitalize" the ruling party's organizational presence on the ground "if the top leaders stand together to bolster the party's organizational strength."

The NCP, which was formed by merging the erstwhile CPN-UML and CPN (Maoist Center), has been "almost dysfunctional" since the merger announcement in the absence of leadership of the party's lower committees for a year. Following criticism from party rank and file, the top leaders have picked the chiefs and secretaries of the district committees.

“We have made an understanding to announce the formation of district committees of the party tomorrow. I'm pleased to share this news with you,” said NCP Chairman Pushpa Kamal Dahal, addressing a function in Kathmandu on Sunday.

It is said that the names of district chiefs and secretaries will be announced amid a function on Monday, the day that marks the establishment of the first Communist Party of Nepal around seven decades ago.

Aiming to revitalize the party's sister wings, the leaders have made an understanding to form a secretariat called high command of around two dozen sister wings. But they dropped the agenda of finalizing the chiefs of sisters wings and determine the responsibilities of the central leaders.

Informed leaders say the top leaders have reached "a tentative understanding" to appoint a former Maoist leader the head of the party's youth wing and a student leader aligned to the erstwhile UML the head of the student wing "in a bid to maintain inter-party balance."The party's committees and sister wings, according to the leaders, will be formed at the 60:40 ratio between the erstwhile UML and CPN (Maoist Center). According to the agreement, leaders with UML background will make up 60 percent of the party committees and sister wings.

While naming the district committee chiefs, the top leaders have made an understanding to let those who were elected local chiefs before the parties were merged into one.

After making an understanding with Pushpa Kamal Dahal on finalizing the party's unification deal, the other chairman of the NCP, KP Oli held hours-long meeting with Madhav Nepal, Bishnu Poudel and Ishwar Pokharel at the PM's Residence in Baluwatar.

Nepal, who had been warning of forming parallel committees in the party "if he weren't given a respectable share in the unification process", was convinced after Oli promised to "respect his hold in the party."

KATHMANDU, April 23: Unification of the Nepal Communist Party (NCP) concluded Monday with the naming of the chiefs and secretaries for... Read More...