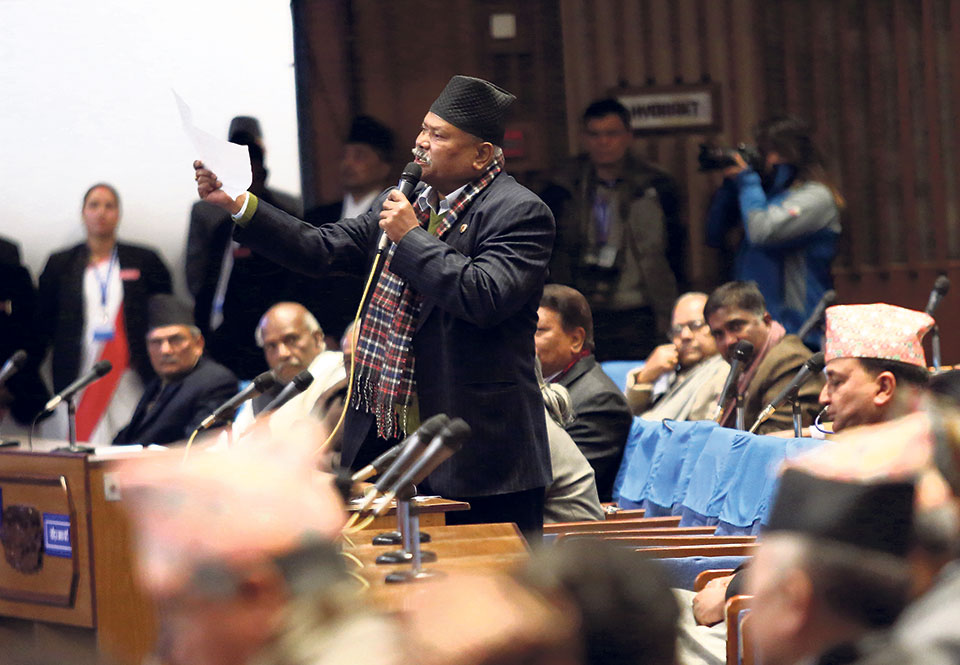 KATHMANDU, Jan 22: The main opposition, Nepali Congress (NC), obstructed both the lower and upper houses of the federal parliament on Monday as the government showed signs to pass the disputed National Medical Education Bill without accommodating the demands of Dr Govinda KC, who has been staging his 16th fast-unto-death demanding reforms in the health sector.

The NC decided to obstruct the parliament proceedings after the government included the bill as one of the agendas of the House business. The party, however, raised a different issue to obstruct the House instead of citing the controversial bill.

NC lawmakers obstructed the House accusing the government of trying to dissolve two hospitals named after former party presidents -- Girija Prasad Koirala and Sushil Koirala — which are in the process of being established in Tanahun and Banke, respectively, by not endorsing the proposal of their continuation from the cabinet.

According to NC leaders, they raised the issue of the hospitals, instead of the bill, as the protest against the bill would invite accusation to the party of not respecting the parliamentary proceedings. The bill was revised by the Education and Health Committee of parliament through a majority amid the dissenting views of NC lawmakers.

NC has been pressing the government and ruling Nepal Communist Party (NCP) to revise the bill in line with the agreement with Dr KC in July, last year.

Therefore, they obstructed the parliament proceedings raising a different issue that would give them some space to negotiate with and press the government to accommodate Dr KC’s demands in the bill.
However, ruling NCP leaders have accused the NC of using the issue of hospitals named after their leaders as a ploy to obstruct the medical education bill.

“The prime minister in his address in the House last week has already addressed their demands by assuring that the government will continue the two hospitals. NC leaders sought a cabinet decision for confirmation but it is not possible immediately because the prime minister is abroad now,” NCP Chief Whip Dev Gurung briefed journalists about the meeting with the NC leaders after the obstruction.

Earlier, NC Vice-president Bijay Gachchhadar, addressing the parliament meeting, said that the House meeting cannot proceed until the government takes a decision to give continuity to the two hospitals.
He also drew the attention of the government toward the fast-unto-death of Dr KC, demanding endorsement of the Medical Education Bill in line with the agreement reached with Dr KC.

“The NC President Sher Bahadur Deuba-led government had issued an ordinance addressing Dr KC’s demands. The Medical Education Bill should be revised in-line with the ordinance, and the agreement with Dr KC,” he said. “Don’t play with the life of the surgeon.”

Accusing Prime Minster KP Oli of lying to parliament during NC’s questions on the issue, Gachchhadar questioned the ground of the government decision for not approving the continuation of the two hospitals.
“The prime minister, speaker and members of parliament are here just because of the struggle and contribution of GP Koirala,” he added.

“This decision undermines parliament as well.” Accusing the government of trying to erase the history of NC, he also challenged to rename the BP Highway after KP Oli’s name.