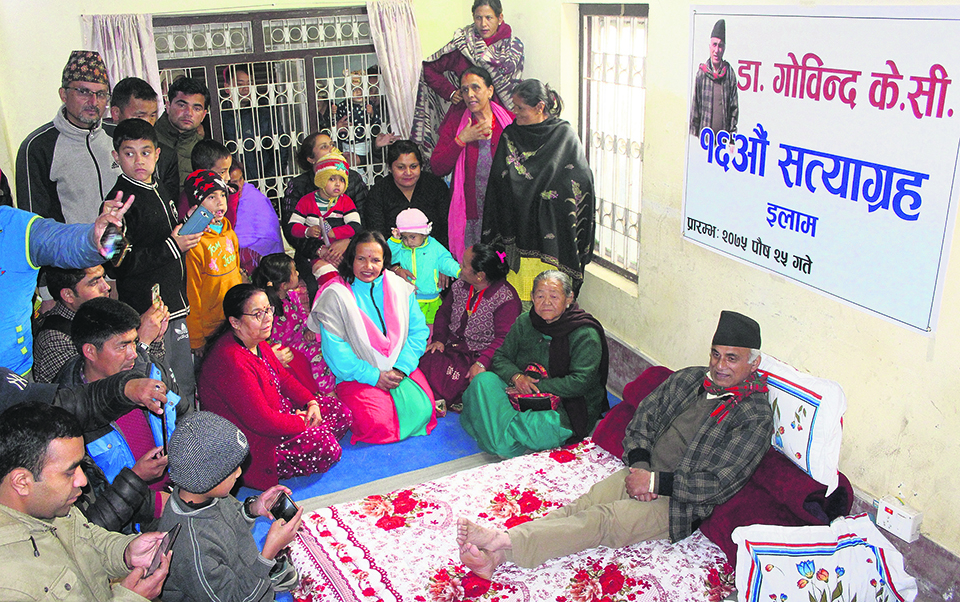 ILAM, Jan 10: Dr Govinda KC started his 16th fast-unto-death in Ilam district on Wednesday evening protesting against the passage of the National Medical Education Bill by the parliament’s Education and Health Committee in violation of an agreement reached with him.

The senior orthopedic surgeon at the Tribhuvan University who has long been fighting for reforms in the medical education sector, has put forth six demands to the government while announcing his hunger strike. Dr KC said that decision of House panel was in breach of the July 26 agreement reached between him and the government and he was left with no other option but to start a new hunger strike.

Hundreds of locals have thronged to extend support to Dr KC, who has chosen a  private building which was rented by the Department of Urban Development and Building Construction until a few months ago.

“The parliamentary committee has altered the National Medical Education Bill in favor of the ‘medical mafia’ and against the interest of the general public and medical students. I will not end my fast until the bill is brought in line with the agreement signed with me,” said Dr KC while announcing his hunger strike.

KC said that the government of the Nepal Communist Party commands a two-thirds majority in parliament so Prime Minister KP Oli should address his demands as agreed on July 26 last year. “Now it is the responsibility of the prime minister to address my demands because his party has majority in parliament,” said KC.

Last week, Dr KC had postponed his planned hunger strike at the request of the chairperson of the Education and Health Committee Jayapuri Gharti after she gave assurances that the bill would be passed in line with the July 26 agreement.

According to the agreement signed with Dr KC earlier in July during his previous hunger strike, the major demands were to be addressed within 15 days to two months. KC had ended his last hunger strike after 27 days following an agreement with the government.

As per the agreement, the major demands were to be addressed within 15 days to two months. Although four months have already elapsed since the agreement, the government has yet to address his major demands that include endorsement of Medical Education Bill and action against 43 officials implicated by a report of former chief judge at the special court Gauri Bahadur Karki for their involvement in irregularities while granting permissions to private medical colleges.

However, the government has only recently formed a couple of panels to study the possibility of running MBBS classes at Karnali Academy of Health Science (KASC) and opening medical colleges in various provinces.