Nagarik reporter Suman Chapagain being treated at Bluecross Hospital, Tripureshwar after being beaten up by DSP Santosh Singh Rathore (inset). Chapagain has received injuries to his head and chest. Photo: Dipesh Shrestha/Republica

KATHMANDU, Dec 11: Nepal Republic Media sports journalist Suman Chapagain was severely injured and admitted to hospital after coming under blows from Nepal Police Deputy Superintendent Santosh Singh Rathore and his colleagues inside Dasharath Stadium premises and in front of the National Sports Council  head office, in Kathmandu on Tuesday.

Chapagain, a member of Nepal Sports Journalists Forum (NSJF), suffered head and chest injuries, including swelling on the left side of the face and bleeding from the left ear after police used brute force on him at around 11 am as he tried to take pictures of a sports fan who was being taken away forcibly by them.

Rathore and his group assaulted Chapagain, kicking him with their boots and using foul languages even though he repeatedly showed his press accreditation card and media ID, said Nirajan Adhikari, a media person in Kathmandu who pulled Chapagain toward himself to save him from further bodily harm.

“Such kinds of acts have violated basic human rights. It is no more just about our right to a free press. It is worse and harms the reputation of the Nepal government on the international stage,” stated Durga Nath Subedi, president of NSJF, in an official press release.

“We can’t condemn enough what happened today,” added Subedi and hinted that they might internationalize the issue.

NSJF members staged protest on the NSC premises boycotting the SAG football final match. They displayed placards that read “13th SAG is not police parade”, “Solidarity with sports journalists”, Stop police suppression”, etc. Journalists from Bangladesh, Bhutan and Sri Lanka who are in Kathmandu to cover SAG also joined the protest in an expression of solidarity with Nepali journalists.

Likewise, a group of journalists sneaked protest banners inside the stadium at media center and displayed it briefly during the half-time. Soon the police snatched the banners. Member-Secretary of NSC, Ramesh Kumar Silwal, regretted the police action and promised an investigation.

The NSJF and Federation of Nepali Journalists (FNJ) have demanded stringent action against the policemen involved in the incident. Ashok Dahal, the president of FNJ Republica chapter issued a statement condemning the police violence. 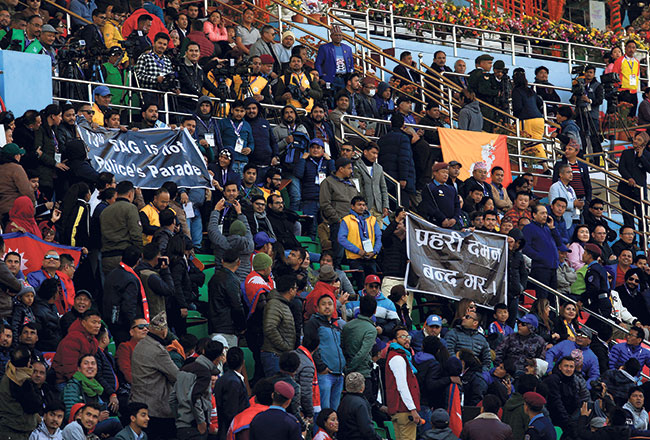 Suspended CAN gets green signal for central committee elections