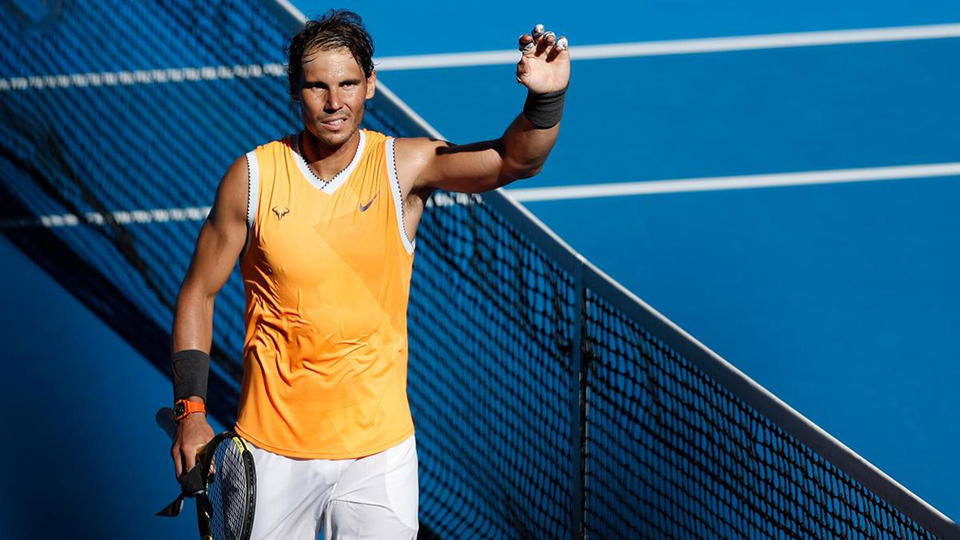 MELBOURNE, Jan 20: Rafal Nadal routed Tomas Berdych 6-0 6-1 7-6(4) in a center court masterclass to charge into the quarter-finals of the Australian Open on Sunday.

The 2009 champion was relentless at Rod Laver Arena, claiming the first two sets in an astonishing 51 minutes as the former world number four Czech suffered a dreadful start.

Berdych rallied to grab a set point off Nadal in the final stanza but an untimely malfunction of the serve clock rattled him during the ensuing tiebreak and he bowed out slapping a backhand into the net.

Tiafoe, the son of Sierra Leone immigrants, celebrated his 21st birthday on Sunday by upsetting Grigor Dimitrov at Melbourne Arena.

The match is certain to be billed as an intriguing clash of generations but Nadal has already shown disdain for hyped-up youth. He destroyed Alex de Minaur, the highly regarded 19-year-old local, in straight sets in the previous round.

“When you have younger players coming, they have always more attention to everyone,” the 32-year-old told reporters.

“Of course, he’s dangerous. He’s in (the) quarter-finals. He won great matches during the whole event. Going to be a tough one.”

Untested by three Australian opponents at the tournament, Nadal may have been grateful to Berdych for belatedly finding his game.

The French Open champion Nadal fought off a break point in the first game of the match but that was the only pressure he felt in a woeful first set for Berdych, who landed barely a third of his first serves.

The big Czech double-faulted before meekly netting a backhand to fall 2-0 behind and lost the set in 34 minutes when the Spaniard swooped forward to lace a forehand down the line.

Nadal ploughed on to 3-0 in the second set before Berdych finally held, raising ironic cheers in the terraces.

The memory of Berdych’s famous quarter-final win over the Spaniard at the 2015 tournament can never have seemed foggier for the 33-year-old, whose 2018 season was cut in half by a back injury.

To his credit, though, he dug in for the third, finding his monster serve and pounding forehand.

He saved two break points at 5-5 and prised a set point in the following game with a blazing forehand down the line.

Nadal ripped it out of his hands, however, with some forehand magic of his own.

Berdych battled on to lead 4-3 in the tiebreak but became rattled when the shot clock failed. After carping at the chair umpire, he committed two unforced errors.

Nadal needed no further excuse, and he fired a forehand winner to set up two match points before a frustrated Berdych fell firing into the net.

No entry for Madhav Nepal in UML: Oli
8 hours ago

12 people, including four foreigners, trapped in Tumling of Namkha
8 hours ago

Fire breaks out in Fusre of Dharan
6 hours ago

12 people, including four foreigners, trapped in Tumling of Namkha
8 hours ago