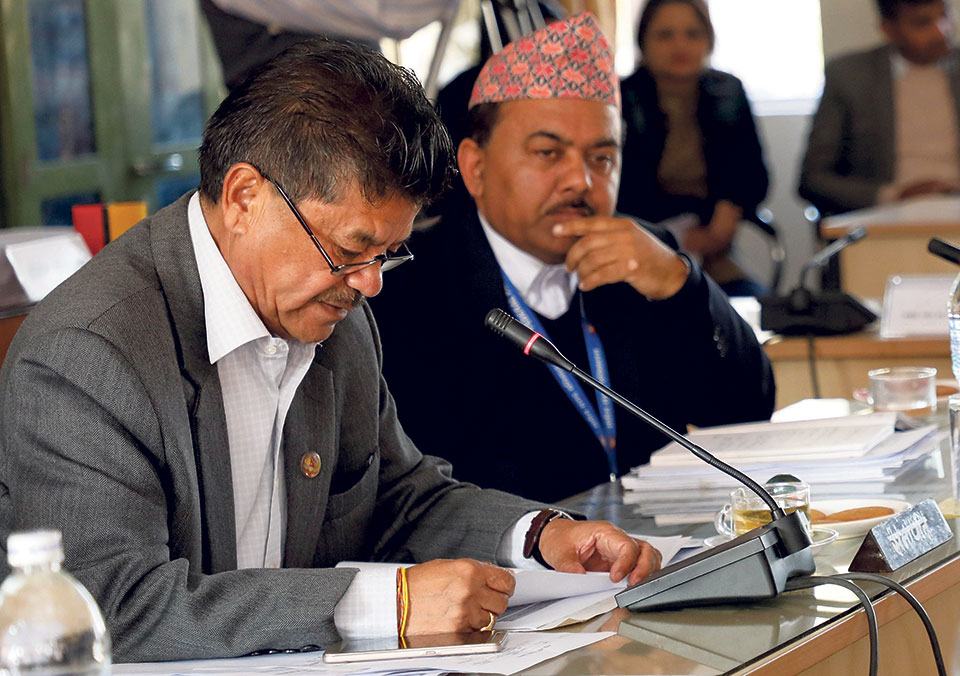 Nepal Airlines Corporation Managing Director Sugat Ratna Kansakar (left) answering to questions from lawmakers at the parliament's Public Accounts Committee on Sunday. He was summoned for questioning over the controversy surrounding the purchase of two wide-body planes. Photo: Dinesh Gole/Republica

KATHMANDU, Nov 26: Officials of the Nepal Airlines Corporation (NAC) who were summoned at the parliament’s Public Accounts Committee (PAC) on Sunday for questioning over the purchase of two wide-body aircraft, faced a barrage of questions but shied away from answering most of them.

The officials were summoned to the committee meeting for questioning over suspected embezzlement of huge funds in the purchase of two A330-200 series Airbus aircraft. Lawmakers also grilled NAC management over its marketing strategies for the new aircraft.

Chairman of PAC Bharat Kumar Shah at the meeting accused the NAC management of embezzling a total of Rs 6.59 billion in the procurement of the planes. Shah claimed the NAC has not yet received about Rs 2.40 billion as 10 percent commission, which is customarily paid by aircraft manufacturers or suppliers. Both the aircraft were purchased for a total of Rs 25 billion. Shah asked the NAC management-led by MD Sugat Kansakar to clarify on the missing commission money.

Lawmakers also sought NAC management’s clarification on the decision to purchase the aircraft via agents instead of negotiating and purchasing them directly from the manufacturer. NAC management was also grilled over why they chose to purchase old aircraft instead of purchasing brand new ones. Lawmakers had also raised questions referring to the audit report of the Office of the Auditor General which has stated that the aircraft procurement was illegal.

In response to all the questions, MD Kansakar only said that they had followed all due legal processes while buying the aircraft. “I also request you all not to have doubts about the aircraft procurement process,” he said. However, Kanskar avoided specific questions regarding commissions and the reasons for buying old aircraft among other things.

The 55th audit report of the Office of Auditor General (OAG) issued in April has clearly stated that procurement laws were breached in the purchase of the two aircraft.

Similarly, NAC management was also questioned over the white paper which NAC issued recently mainly on the marketing strategies to operate the new planes. NAC recently had endorsed a white paper stating that it was facing a financial crisis as almost half of all its aircraft are grounded. Lawmakers also expressed worries over the security of investment made in those aircraft.

The committee has also said that it (the committee) was not satisfied with any of the answers furnished by the NAC management led by Kansakar.

The discussions went on for three hours on Sunday but ended without any conclusion as the committee was not satisfied with the NAC’s reply on the payment of the aircraft purchases along with the warranty and ownership of the aircraft. Dissatisfied with the answers furnished by MD Kansakar, PAC has invited Civil Aviation Minister Rabindra Adhikari for Wednesday to discuss the matter.

Lawmaker Minendra Rijal said, “There is a confusion over the ownership of the wide-body aircraft.”

When asked whether the aircraft was purchased or is on lease, Kansakar did not give a clear answer. Kansakar only spoke about marketing strategies for operating both the aircraft. MD Kansakar and Madan Kharel, executive chairman of NAC, were avoiding questions and focused on planning issues.

“Within a few months all aircraft for domestic flight will resume smoothly,” NAC Executive Chairman Madan Kharel, told the committee, adding, “And regarding the white paper, we issued it not because we are in crisis but we are having a cash flow problem and want government support.”

Meanwhile, Krishna Prasad Devkota, secretary at the Ministry of Culture, Tourism and Civil Aviation, told the committee that all necessary processes were followed while buying the aircraft. “No law has been breached,” Devkota claimed.

NAC had purchased the aircraft from American company AAR Corp borrowing funds from the Employees Provident Fund (EPF) and Citizen Investment Trust (CIT). In April last year, the government had decided to stand as guarantor for the NAC, paving the way for the state-owned carrier to borrow the amount and buy the two wide-body aircraft. Following the government decision, NAC had signed loan agreements with the EPF and CIT.

The first wide-body aircraft arrived in Kathmandu on June 28 and the second arrived on July 26.

KATHMANDU, Dec 13: The Public Accounts Committee (PAC) of parliament has formed a sub-committee to probe alleged irregularities in the... Read More...