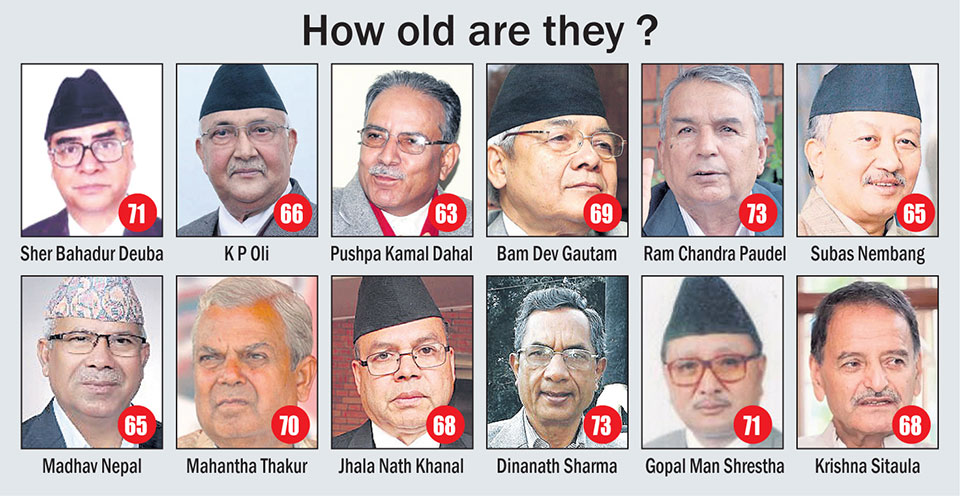 KATHMANDU, Jan 26: While the government's latest decision to reduce the  eligibility age for the elderly allowance suggests that citizens above 65  are not up to any income-generating work and  deserve protection under the state's social security policy, a majority of leaders holding key posts in major political parties and in recent governments fall into this age group.

Incumbent Deputy Prime Ministers Bijay Kumar Gachchhadar of  NC and Kamal Thapa, who is also chairman of Rastriya Prajatantra Party, will be eligible for the elderly allowance in the next two years as per the government's latest decision.
After  NC, the CPN-UML, which has emerged as the largest political party in the recent elections, has the most older leaders.

Some UML leaders including Jhala Nath Khanal, Madhav Kumar Nepal, Bamdev Gautam and Subas Nembang, who have been projected as future candidates for president, are all above 65. UML Vice Chairman Bam Dev Gautam is 69; Khanal is 68, and Nepal and Nembang are running  65. UML General Secretary Ishwar Pokhrel is turning 65 next year and Vice Chairman Bhim Rawal after two years.

CPN (Maoist Center) Chairman Pushpa Kamal Dahal is comparatively younger at 63 while another leader from his party, Dinanath Sharma, is 73.

How old are our leaders?

PANCHTHAR, April 12: During the local polls, political parties had included social security allowance for the elderly people as one... Read More...

JAJARKOT, May 12: With the local elections just around the corner, youths of Jajarkot are demanding employment opportunities while the elderly... Read More...