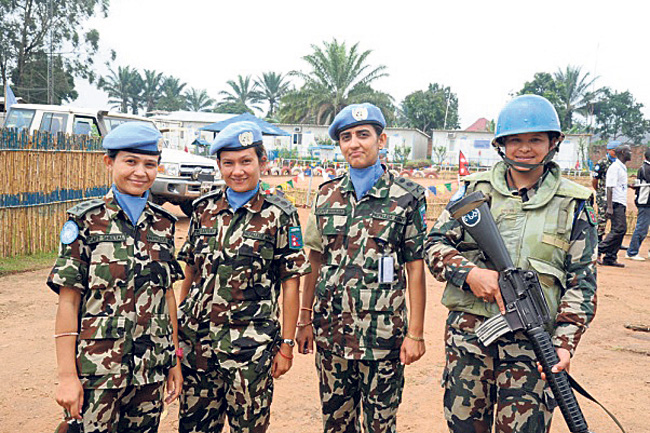 The Nepalese Army (NA) has contributed to 42 UN peacekeeping missions, in which over 114,818 personnel have already participated. The first Nepali contingent, Purano Gorakh Battalion, was deployed in United Nations Emergency Force–II in Sinai, Egypt in 1974. The ground reality was so volatile that the UN had to deploy this mission within 24 hours of Security Council resolution.

It is noteworthy that of the 16 UN peacekeeping missions, Nepal Army is involved in all 16 missions, with 4,450 personnel (including 118 females). Till date, Nepal is the sixth largest troop-contributor in the UN. This is a matter of great pride for a small country. Nepal has also pledged 5,000 troops i.e. one brigade under the UN Standby Arrangement System (UNSAS). In total, 63 of our brave soldiers have scarified their lives and 60 personnel have been disabled while serving abroad.

Traditional peacekeeping has been transformed into more complex and multi-dimensional operations. Similarly, in order to make regional organizations more responsible for regional peace and security, the UN has started working with regional organizations like the European Union, the Economic Commission of West African States (ECOWAS) and the African Union. Nepal Army has served under all these mandates. Further, we have strictly adhered to the Secretary General’s zero tolerance policy against all forms of sexual exploitation and abuses. NA’s commitment to human rights, fundamental freedom and gender balance is unwavering. We have recognized the crucial role of female peacekeepers in protection of civilians, and hence there has been an increase in their employment. Similarly, Nepal Army has provided equal opportunity for all its personnel to participate in the UN peacekeeping missions, without any discrimination and even integrated ex-Maoist combatants have been sent.

Our troops have served in most challenging and complex peacekeeping missions with high degree of professionalism and complete devotion. For instance Nepal’s Army contribution to the UN Mission in Somalia (UNOSOM II) and the UN Mission in the Democratic Republic of Congo (MONUC) are acknowledged around the world. Eight brave Nepali soldiers sacrificed their lives in trying to save Somali citizens during the battle of Mogadishu in 1993/94. Similarly, Capt. Kabindra Jung Thapa died after saving all members abroad a UN helicopter in northeast Congo in 2005/06. He was the last man on board and was shot by rebels. These soldiers not only demonstrated exceptional courage but also greatly buttressed Nepal’s image abroad. Such an extraordinary contribution was acknowledged and these brave Nepali peacekeepers were posthumously decorated with the highest gallantry awards from the UN Secretary General.

The NA has been trying to enhance the capacity of national, regional and international peacekeepers prior to their deployment in peacekeeping missions. In this context, it developed its Birendra Peacekeeping Operations Training Center (BPOTC) at Panchakhal into a Peacekeeping Center of Excellence. It trains peacekeepers on various aspects of peacekeeping. The center conducts essential courses such as pre-deployment Contingent Commander’s course, Training of Trainers course and UN Logistics course. As of now in addition to the Nepali peacekeepers, the center has graduated more than 1,500 international military personnel from 34 countries and greatly contributed to our country’s image.

As far as relation between Nepali foreign policy and participation in UN peacekeeping mission is concerned, our foreign policy is guided by “the principles of the United Nations Charter, nonalignment, Panchasheel (five principles of peaceful coexistence), international law and the value of world peace”. In foreign policy there are no permanent friends or enemies, only permanent interests derived from geography, history, economics and distribution of international power. The fundamental objective of our foreign policy is to enhance the dignity of Nepal in international arena through the maintenance of our sovereignty, integrity and independence. Our participation in UN peacekeeping missions has greatly contributed to this objective.

Nepal’s peacekeeping participation has been continued even after the establishment of republic. Despite many changes in our political system, Nepal’s participation in peacekeeping operations remains constant. This indicates that there is consensus among political parties that peacekeeping contributes to Nepal’s vital interests. However, the government treats peacekeeping as the sole prerogative of the NA, showing lack of enthusiasm to coordinate and promote peacekeeping capabilities in the changed global security dynamics. Today’s conflicts demand agile and technologically sound forces. Further, there is growing competition among third-world countries to participate in UN peacekeeping missions.

NA’s participation in UN peacekeeping missions has continued without meaningful political-diplomatic support. Except one Deputy Military Advisor in UN DPKO, the UN has allowed only five Nepali Force Commanders and a few Deputy Force Commanders in the field missions. Therefore, one of the goals of our diplomacy must be to ensure more senior military as well as political appointments for Nepalis, particularly in the UN DPKO.

In essence Nepali peacekeepers are most professional. We firmly believe that UN peacekeeping missions supported by strong, committed and dynamic Nepali foreign policy will greatly contribute to the country’s image abroad. Peacekeeping and foreign policy should complement one another. So far, Nepal has played a reasonably active and constructive role in the UN. But Nepal should aspire for an even more proactive and strategic role. Our participation will be guaranteed in the future if the government provides continuous morale and material supports to the NA to prepare our peacekeeping forces to make them more agile and tech-savvy.

This will help the NA to represent our country to the best of its ability. Our peacekeepers are peace ambassadors who propagate Nepal’s strong commitment to world peace and security. So Nepal Army’s participation in UN peacekeeping missions must be viewed as an instrument of our foreign policy as well as an asset to ensure national security and promote vital national interests.

The writer is a retired Brigadier General of the Nepalese Army. He commanded 1050 men first Nepalese Contingent in the UN Peacekeeping Mission in the Democratic Republic of Congo

KATHMANDU, Nov 6: The economist Dr.Chandramani Adhikari has stated that the manifestos released by all political parties are incomplete. He... Read More...

The man with a mission

On the first anniversary of Ministry of Urban Development (MoUD), one of the highly successful civil campaigns of the country... Read More...