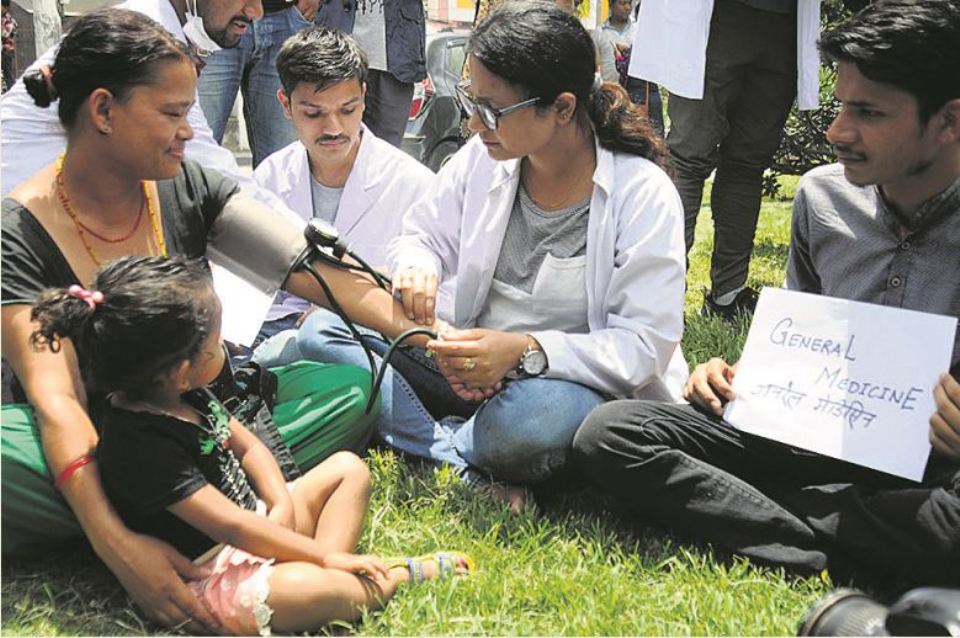 Recently, a physician affiliated with one of the premier private hospitals in Kathmandu wrote about present day working environment in health sector in a Nepali daily. While he raised some valid issues, including that of mistreatment of service providers, medical college mafia, financial extortions, and improper licensing of facilities and manpower, he argued these matters largely portray physicians as victimized professionals, and likened their predicament to byathaa (an affliction) that they have to endure on a daily basis.

Apparently, according to him this is causing decline in morale among health workers. Regardless of merits of his argument to a certain degree, given the poor status of health of population in general, undesirable conditions of health facilities, lack of quality of care, difficulty in accessibility of services, and financial burden shouldered by patients, his portrayal of the medical professionals as afflicted victims is rather tone deaf reaction. Physicians in any society reign on the very top of the list of desired and highly regarded occupations. Such regard is probably even more, but certainly not any less in Nepal. The doctor passionately describes his and many of his colleagues’ hardship-filled journeys to seek better education from rural districts to urban areas, including to foreign lands on scholarships, and eventually back to Kathmandu where they struggle with resources and opportunities to start their careers. In reality, even today those aspiring to gain higher education and careers have to travel that path, just like the doctor reminisced, especially for those on lower rungs of the socioeconomic status. So if the doctor somehow thought hardships were limited to prior generations, then he is mistaken. Yes, there are plenty of shortcomings in health sector due to poor system that is further aggravated by poverty and weak legal provisions. Violence, threats, and rise of extortion agents are bad developments seen in medicine sector today. We should collectively condemn such actions. Patients should also understand that undesired outcomes, although exceptions rather than rules, are sad realities in medicine. They happen all the time, and everywhere.

How those incidents are monitored and handled are dependent on quality and strength of healthcare policies and legal system of the nation. Similarly, physicians need not take criticisms and emotional outbursts by patients or their family members at times of unfortunate outcomes as indictments against the entire medical profession. Privileges and respect extended to physicians by patients and the society far outweigh some unfortunate incidents every now and then. These incidents, largely borne out of unmet expectations from both sides of the medicine, will settle down over time as we become more developed and sophisticated and legal recourse will prevail over thuggery.

Ironically, this untempered expectation that the society has of physicians is the profession’s own doing. Physicians are victims of their own success. Even though the Hippocratic Oath all physicians swear dates back to fifth century, the history of modern medicine is rather young. In short time, since the acceptance of the germ theory of disease, medicine has been on a steep trajectory, aided by rapid advancement in technology and science. In our own country, the progress that has been made in short course has been under physicians’ leadership, and they have always been the lynchpin of state of the healthcare. Because of this progress in saving lives, the society has surrendered authority to regulate our wellbeing to medical professionals and we have elevated their status to the divine pedestal previously occupied by the religious higher being. This often leads to unreasonable expectations.

TRUE AFFLICTION
Meanwhile, if I may, I would like to remind the good doctor what true byathaa is for Nepalis in general. Byathaa is when people in rural districts of Nepal who even in the 21st century die of diarrhea because of poor sanitation and dirty water. Pregnant women who still lose their lives or their babies’ lives because they don’t have access to prenatal care, and government’s own data says 40 percent still give birth at home. I am inclined to describe that as byathaa. Malnourished children of families drowned in poverty struggle to survive past their childhood. That is a byathaa. Child with mental illness who is shackled and hidden from society by his family without treatment in fear of social stigma, that is byathaa.

There are many other realities in healthcare that could be appropriately termed to the literal meaning of byathaa.  Thus doctor’s depiction of his profession’s issues doesn’t quite fit the bill. It rather makes a mockery of those who are truly suffering. There are many other hardworking workforces who are financially deprived and are navigating their lives through many hardships and social injustices in our society. They are neither afforded any voice to spill their byathaa nor do they posses leverage to fight against their everyday predicaments. Yet, those workforces are just as vital to keep this dysfunctional society going. In reality, doctors are able to wield power to their advantage more than any other profession. Sociologist Max Weber defines social class not only by wealth but also by occupational status and power afforded to the group. In that sense, who among all professions have all three bases covered than physicians? So the argument the doctor is making on the basis of his humble beginning, ironically, sounds more like a call for an elitist entitlement.

I am not trying to diminish difficulties faced by medical professionals.  My point is it is not as abject as it is for many other groups in the country.

The author writes on issues related to health, illness and aging

Adequate water, sanitation and hygiene in health facilities are critical to patient and health worker safety. Here’s how to secure... Read More...

No country for new leaders

The state has no right to control people’s freedom and liberties while introducing right to privacy laws. No law should... Read More...

Nepal is falling into a trap of India, China and the US
2 hours ago