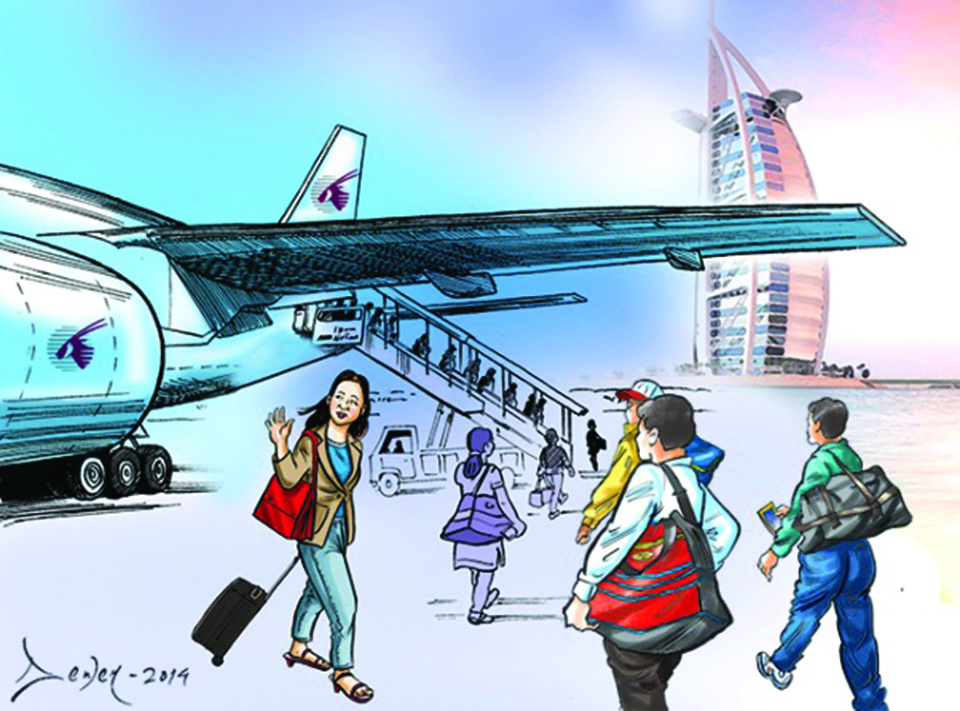 Importance of work-related outmigration and remittances for Nepali economy warrants setting up a credible, frequently updated database on the stock of migrants by destination

What proportion of Nepali households receive remittances from abroad? Over half: a pat answer that may go unchallenged even by economists, forget newsmen.

A 2018 Nepal Rastra Bank study on the impact of the free-visa-free-ticket arrangement for outbound workers states, when discussing the importance of remittances from abroad, that 56 percent of households receive remittances. It was citing the Third Nepal Living Standards Survey (henceforth NLSS), conducted by the Central Bureau of Statistics (CBS). Actually, that’s the percentage of households receiving any remittances, whether from within Nepal or without, as reported in page 80 of NLSS (Volume II).

This is an instance of failure to read survey tables correctly and unwillingness to compute estimates from the underlying dataset. A far more challenging enterprise is to divine the number of Nepalis currently working abroad. A transparent and logical basis for taking a stab at it is sorely missing. The rest of this article hazards one.

An oft-pedaled number, including in government documents, is in excess of four million. The Economic Survey 2018/19 refers to 4.37 million Nepalis having gone abroad for work as of fiscal year 2017/18. One might as well add to that the 193,411 people who went abroad in the first ten months of 2018/19. This number, however, cannot be taken as an estimate of the stock of Nepalis working abroad. It is likely based on the summation of labor permits (new entrants and legalized) issued in the decade to 2017/18, as reported by the Department of Foreign Employment (DoFE). This does not account for the length of a migration spell.

Although detailed data on migration spell is hard to come by, evidence from a World Bank survey suggests that the median migrant from Nepal spends, per migration episode, nine months if the destination is India and 2.3 years if the destination is West Asia and Malaysia. If we assume that the average migration spell is three years and thereby sum the fresh labor permits (new entrants and legalized) issued in the last three years (2015/16 to 2017/18) as well as the labor permits renewed during the same period (in turn assuming that those with renewed permits also stay abroad for three years on average), the estimated stock of migrants abroad would be 1.8 million. Yes, this does not include Nepalis working in India. But even if we assume that one million Nepalis are working in India—although World Bank estimates in its bilateral migration matrix dataset point to half that number—the total stock would be 2.8 million. The other day, yours humbly was struck by a guess about the number of Nepalis working in India made by a speaker in a seminar: 4.5 million. Perhaps one can arrive at this figure if one includes Prashant Tamang of Indian Idol fame and other Nepali-speaking Indian nationals.

Another concern with DoFE data is that it does not factor in informal outmigration—such as those who go abroad for work without obtaining labor permits from DoFE. From this perspective, an estimate based on the latest national population census would be more reliable. Households are asked about absentee members residing abroad, and it seems reasonable to assume that they will provide the limited information asked about such members irrespective of whether the latter have obtained labor permits from DoFE or not. Moreover, data from this source can be expected to capture work-related migration to India, too.

As per 2011 census, absentees abroad numbered about 7.43 percent of the resident population of Nepal. Applying this proportion to 30 million—arguably higher than the current population—we would get 2.23 million. This, again, is much lower than the 4.3 million figure arrived at by brute summation of labor permits issued in the last 10 years. This, however, is close to the estimated stock of Nepal migrants abroad reported in the World Bank’s bilateral migration matrix database, where the estimate for 2017 is 2.005 million. The similarity in the two numbers is likely due to the national census being the main basis for the World Bank estimate. In short, the 4.3 million-plus figure could be an overestimate, unless one can produce it with a convincing method.

A possible concern with the census data is that it may not fully capture seasonal migration to India of six months or less since absentees are defined as those who have been away for more than six months. A way to get a handle on this problem is to explore the raw data from the “migration” section of NLSS, where households are asked about members who had been away from their “location” (to another village or country) for more than two continuous months in the last five years. Some 98 percent of those who had gone to India under these conditions had returned by the interview date. Those who had not returned had gone to India six or fewer months before the interview date—which is not surprising because had they been away, or intended to be away, for more than six months they would have been counted as absentees and been reported in NLSS section on “absentees”. The interviews of households were spread fairly evenly over an entire year to capture the seasonality of information being sought.

Using sample weights, the number of people who had gone to India in the year to the survey date is 282,477, or one percent of the total national population inferred from the survey. Among them, those who had been away for, or were expected to be away for, six or fewer months numbered 260,035 (0.93 percent of the national population). Only 15,784 of them were still away, and, strictly speaking, only they would constitute the stock of seasonal migrants in India at a given point in time. To address possible concerns that 15,784 is too small a number—although one estimated from a nationally representative survey with interviews spread across the year—let’s take a more liberal approach and apply 0.93 percent (capturing flow and stock of seasonal migrants in the 2010/11 NLSS) to 30 million. This yields 279,000 as the number of seasonal migrants from Nepal to India at present. Combining this with the earlier estimate of absentees abroad from the census data, we would get 2.5 million as an estimate of Nepalis currently abroad. This, again, is much less than 4.37 million.

Note that the estimate obtained from the census and NLSS data considers all Nepalis abroad as workers. If one only counts those who have gone abroad with the primary purpose of working, the number would be lower still. But it seems reasonable to assume that many of those who do not report employment as the main purpose of going abroad would also be working and remitting money home.

The importance of work-related outmigration and remittances for the Nepali economy warrants setting up a credible, frequently updated, database on the stock of migrants by destination. Key to creating such a database is keeping a record of returnees.

For our temptation for career and financial gain abroad, are we not ruining the quality of life of our parents? Read More...

How many Dalits possess land in cities? How many Dalit students are enrolled in top-notch private schools and colleges? How... Read More...