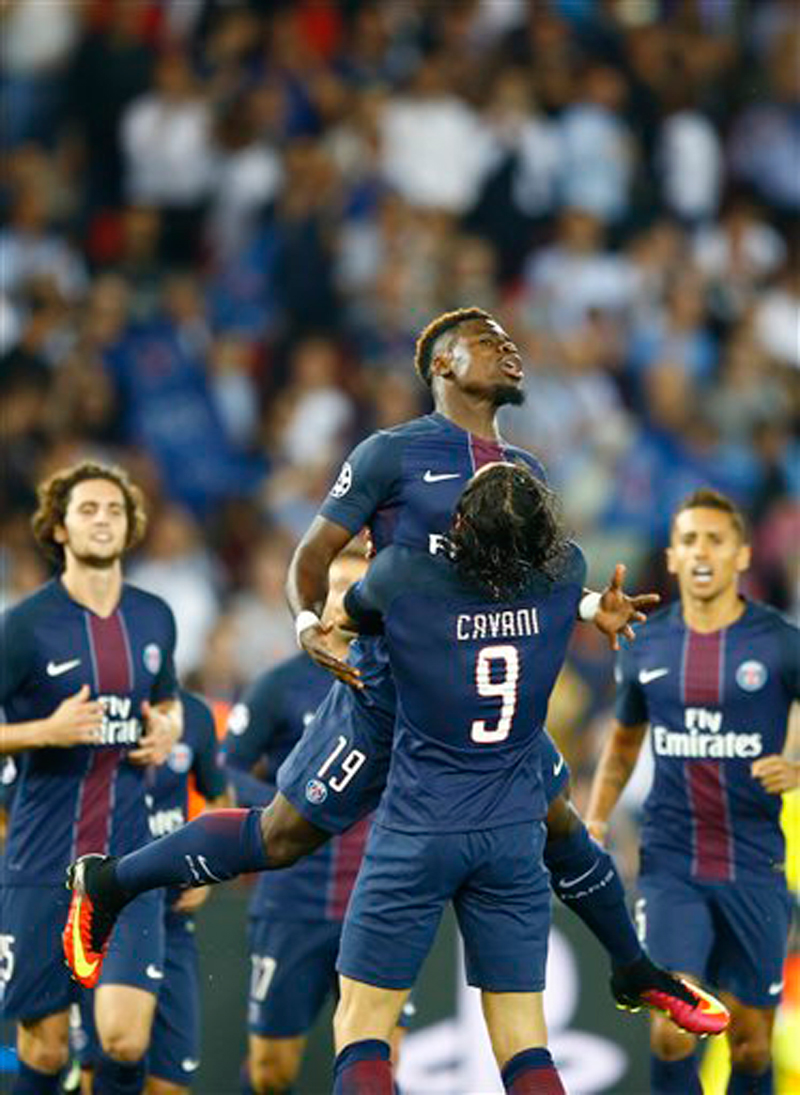 Messi's fast start was the first of a hat trick in Barcelona's 7-0 rout of Celtic, and fellow superstar forwards Neymar and Luis Suarez also scored. Celtic had a penalty saved when trailing 1-0 midway through the first half.

Cavani's even faster strike was the end of PSG's scoring in Paris against Arsenal, and Alexis Sanchez's late equalizer earned a 1-1 draw.

Heavy rain in Manchester forced City's game against Borussia Moenchengladbach to be called off 20 minutes before kickoff.

Here's a roundup of all the action on Tuesday:

A pair of 1-1 draws in Paris and Basel left visiting teams Arsenal and Ludogorets happier with their work.

Alexis Sanchez of Chile scored in the 78th minute against the run of the play when he fired home the rebound from 10 meters after PSG keeper Alphonse Areola parried Alex Iwobi's powerful shot.

Both teams finished with 10 players. Marco Verrati and Olivier Giroud, who was also sent off in Arsenal's Champions League opener last year, were sent off following an altercation.

Ludogorets scored freely on the road in three qualifying rounds, but was limited to Jonathan Cafu's 45th goal to finish a twisting run.

Basel levelled in the 79th when Renato Steffen took advantage of a goalkeeping error.

Napoli took early control of the group with a come-from-behind 2-1 win at Dynamo Kiev, which had Serhiy Sydorchuk sent off in the 68th minute.

Poland forward Arkadiusz Milik twice scored with headers in the first half, the second in stoppage time, to cancel out Denys Garmash's 26th-minute opener for Dynamo.

Milik arrived from Ajax in the offseason to replace Gonazalo Higuain, the Argentina forward who sought a better chance of Champions League success at Juventus.

Benfica was held 1-1 at home by Besiktas when one of its own players scored late for the visitors.

Playing against his parent club while on loan to the Turkish champion, midfielder Talisca scored with a curling free kick in stoppage time.

Brazilian Talisca canceled out a 12th-minute earlier goal by Argentina's Franco Cervi for Benfica, finishing a rebound from Besiktas goalkeeper Tolga Zengin's save.

In a record-setting night at Camp Nou, Barcelona's trio of stars teamed up to outclass Celtic.

Lionel Messi's hat trick included two goals in the first half hour, while Neymar struck with a free kick and set up another four goals. Luis Suarez did his part with two goals against the new team of his former Liverpool manager Brendan Rodgers.

The result surpassed Barcelona's biggest win in the competition — a 7-1 victory over Bayer Leverkusen in 2012. It also improved on a 6-1 win over Celtic from their last meeting in 2013.

Celtic's 5-1 rout of fierce Scottish rival Rangers on Saturday seemed long ago. Moussa Dembele scored a hat trick in the Glasgow derby but on Tuesday had a first-half penalty saved by Marc-Andre ter Stegen.

Beaten by the torrential rain in north-west England, group rivals Manchester City and Borussia Moenchengladbach were surely impressed by what they saw from Spain.

Bayern Munich showed Champions League debutant Rostov what life is like among the big boys of Europe.

A 5-0 drubbing was begun by Robert Lewandowski's penalty and Thomas Mueller's shot in the first half.

It was yet another lopsided win for Bayern which has now scored 20 goals and conceded none in five wins from five games across all competitions.

In a rematch of a Round-of-16 encounter last season, Atletico Madrid beat PSV Eindhoven 1-0 in the Netherlands.

Saul Niguez calmly fired a left foot volley just inside the post in the 43rd minute for the first goal between the two sides this year. In March, Atletico won a penalty shootout after two goalless draws en route to the final.