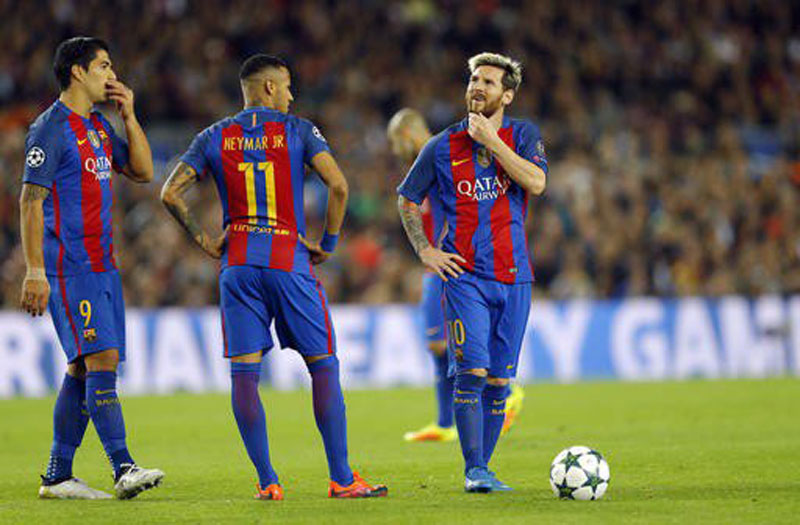 Barcelona's Luis Suarez, Neymar and Lionel Messi, from left to right, wait to take a free kick during a Champions League, Group C soccer match between Barcelona and Manchester City, at the Camp Nou stadium in Barcelona, Oct. 19, 2016. (AP/Francisco Seco)

SPAIN, Oct 20: Lionel Messi scored a hat-trick to inflict a humbling defeat on his former mentor Pep Guardiola on Wednesday, leading Barcelona to an emphatic 4-0 victory over Manchester City in the Champions League.

Messi sped through City's defense and around former Barcelona goalkeeper Claudio Bravo before giving the hosts a 17th-minute lead in a Group C match that both teams finished with 10 men.

It only got worse for Bravo, who was sent off in the 53rd minute for using his hands to block a shot outside the area after his poor pass gifted the ball to Luis Suarez.

Messi struck again in the 61st and 69th to take his total to 89 goals in Europe's top club competition. The Argentina forward is second only to Cristiano Ronaldo, who has scored 98.

Barcelona was reduced to 10 men after substitute Jeremy Mathieu was shown a second yellow card in the 73rd, but Neymar still rounded off the win from a pass by Messi. The Brazil striker scored moments after he had missed a penalty that Messi had earned.

"We know Barcelona. When they arrive (in the area) their strikers punish you," Guardiola said. "It's October. We have lost a match. It's not a quarterfinal or semifinal. Now we have to analyze what happened and rest ... We are in the process (of growth)."

Guardiola lost for the second time upon returning to Camp Nou where he established himself as one of the world's top managers by leading Barcelona to 14 titles from 2008-12. The former Barcelona player coached Bayern Munich when the German side lost 3-0 here in the Champions League semifinals two years ago, when Messi scored twice.

After winning its first 10 matches under Guardiola, City has now gone winless in four games in all competitions.

Barcelona extended its unbeaten run at home in European competition to 18 matches.

A third win in as many games increased the five-time European champion's control of the group. Barcelona has nine points, while second-place City stays on four. Borussia Moenchengladbach is third with three points after beating Celtic 2-0 in Glasgow.

Barcelona and City will meet again in Manchester on Nov. 1.

Messi scored a hat trick in consecutive games in the Champions League for the first time — after three goals in a record-setting 7-0 win over Celtic. He missed the 2-1 victory over Moenchengladbach while being sidelined for three weeks with injury.

Messi returned from that right groin strain on Saturday, scoring as a substitute to help beat Deporitvo La Coruna 4-0.

"We have seen Messi's capacity to finish off goals. It's like he is playing in the school yard. He never gets nervous," said Luis Enrique. "It doesn't matter how many days he has been inactive, how many games he has missed ... (he is) total football. Those of us who train with him are continually amazed by what he does. Not just for the goals he scores, but how he helps the team."

As expected from teams that have both been stylized by Guardiola, City tried to be Barcelona's mirror image from the start.

In a controversial move, Guardiola left striker Sergio Aguero on the bench in a bid to strengthen midfield and dispute Barcelona's ball control more, before eventually sending him on in the 79th.

Both sides pressed high up the pitch, fought for possession of the ball, and exchanged attractive flowing attacks. But Messi didn't allow the parity to last very long.

Andres Iniesta slipped a pass back to Messi, City's Fernandinho fell while trying to chase, and the forward was left all alone to send Bravo floundering to the turf before steering the ball into the empty net.

City, however, soon found itself playing with 10 men after both his hands and feet failed Bravo.

Guardiola had urged City to buy Bravo from Barcelona at the start of the season for his allegedly superior passing skills to predecessor Joe Hart.

But Bravo gave Suarez the ball with a poor pass outside his box. He compounded that by raising his arms to block his resulting shot, leaving the referee no choice but to send him off.

Messi later made good on the advantage by taking Iniesta's pass and firing past Bravo's replacement, Willy Caballero, who would later save a penalty from Neymar.

Messi then used his left foot for a third time when he tapped in Suarez's pass after the striker pounced on Gundogen's errant pass for Stones, who was then unable to prevent Neymar from scoring with a low shot in the 89th.

MANCHESTER, England, May 13: Leicester had a late penalty ruled out in unusual fashion as Manchester City held on for a... Read More...

Nepali among those killed in Baltimore shooting
23 hours ago

President initiates process to form new govt, asks opposition parties to stake claim for new PM by May 13
12 hours ago

Bahrain prince and his team successfully scale Sagarmatha
1 hour ago

PM Oli fails to secure parliament’s confidence, what next now?
14 hours ago