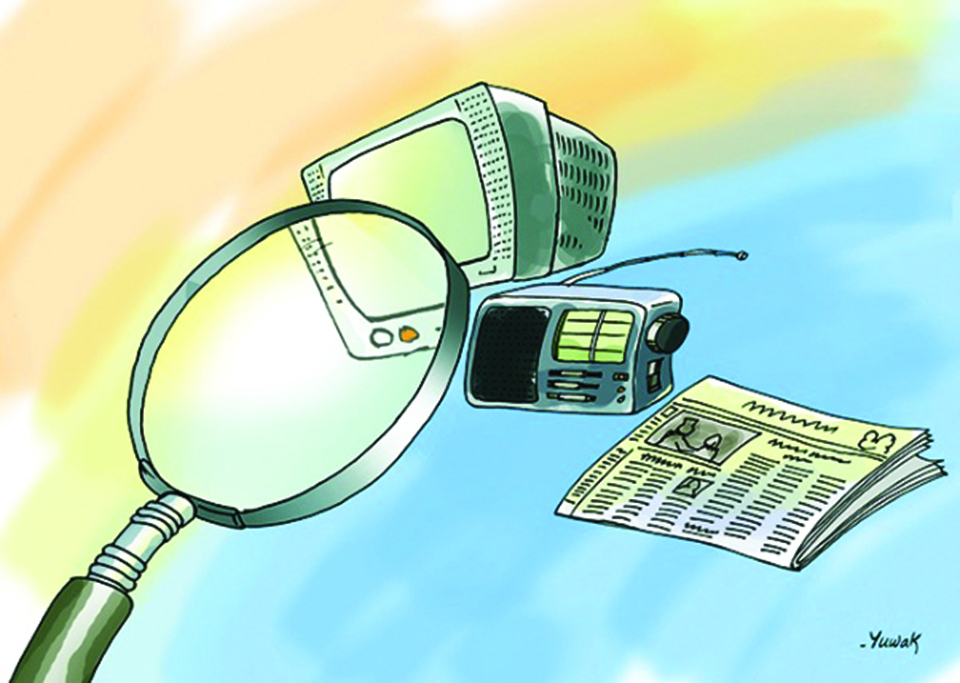 News, features, commentaries, analyses, pictures, cartoon, interviews and round table discussions should be focused on development needs of Nepal

Locals of Chabahil-Jorpati stretch hit the streets burning tires and shouting slogans against the government on May 9 against the delay in blacktopping that section of the road. The road construction had started more than three years ago and it had to be completed in 18 months. But this did not happen, inviting the ire of the locals. And they saw protest as the ultimate means to draw the government’s attention. Dust pollution and frequent and tiring traffic jams had frustrated the locals and turned them hostile against the government. The locals relented only when the contractor signed the agreement and resumed the work

People of Dolahiti, Sunakothi and Chapagaun of Lalitpur followed suit. However, these events of big significance were not adequately covered by the mainstream media. This shows that Nepali media sometimes fail to stand for the people and by the people during the times of need.

Nepal suffered long conflict and unstable governments after 1990’s change. In early years of the change, leaders promised to make Nepal Singapore and Switzerland. Then they shifted their rhetoric to socio- economic transformation and growth. A year after the two thirds majority government came to power, socio-economic development still remains a far cry. Instead, the country is facing over Rs. 1.1 trillion trade deficit, according to the latest report. Increasing import of luxury goods and foreign dependency in agricultural goods are the main causes of this deficit. Media has power to ignite people and put pressure on those in responsible position to check this.

Leading newspapers are found to give less importance to hollow promises of politicians. But majority of around 3000 functioning media outlets of our country still fill up their pages, spaces and their air times with such ‘worthless’ contents. Except a few, TV and radio or multimedia news channels focus on political events.  The ‘easy journalism’ that entails taking interviews, covering speeches, seminars, scheduled events, press statements and claims has dominated Nepal’s media. Such contents cannot address the development concerns.

Nepal Television, the state owned channel, broadcasts Janatasanga Pradhan Mantri (Prime Minister with people) program every week. It has already completed 43 episodes. Apparently, Prime Minister taking people’s concerns through media is good. However, the program sponsored by the Office of Prime Minister is mostly focused on glorifying the PM. Other ministers are also easily available to journalists and are seen in long interviews on TV. This does not only exhibit their publicity hunger but also shows how they are failing on their main duties. The ministers are expected to utilize their all potential time in planning and monitoring their works. They are equipped with spokespersons, advisors and many other supporting staffs to make public their performance and achievements, if any. Ministers themselves do not need to come on TV.

When he was the Prime Minister in 2012, Baburam Bhattarai used to spend at least one night in rural settlements with his security team. Ideally, it was good having the PM at the houses of underprivileged people and interacting with them. But it looked more like a publicity stunt.

In many countries, leaders are seen working in the fields with farmers, cleaning the roads with brooms and visiting old-age homes to share moments with elderly people and laborers and polishing shoes of general public, particularly during election campaigns. Behind all such activities is the leaders’ publicity interest. Such events that are designed to create constructed reality include many other forms—press conferences, seminars, interaction with reporters, holding street marches. But the journalists should not forget that such events are designed with a target of spreading positive messages of their deeds, damaging opponents and consolidating political power.  This does not help the development process. Rather media becomes nothing more than a publicity tool of interest groups.

Gatekeeping starts from policy of every individual media and goes ahead along with assigning reporters, their brainstorming for story idea and collecting facts and information, editing and placement processes of stories. All gatekeepers in all these stages, most importantly strong oversight from editors, are vital for playing the role of a strong watchdog and accelerating development process. Stories focused on development activities help cause real transformation. News, features, commentaries, analyses, pictures, cartoon, interviews and round table discussions should be focused on this aspect. Media intervention is needed for such purpose.

Fossil fuel-based vehicles should be converted into electric ones: Minister Jhakri
23 minutes ago

Vote count postponed in Butwal : Who broke the ballot box seal and why?
53 minutes ago