MCC, BRI and The Game Theory: Nepal’s Quest for Equilibrium 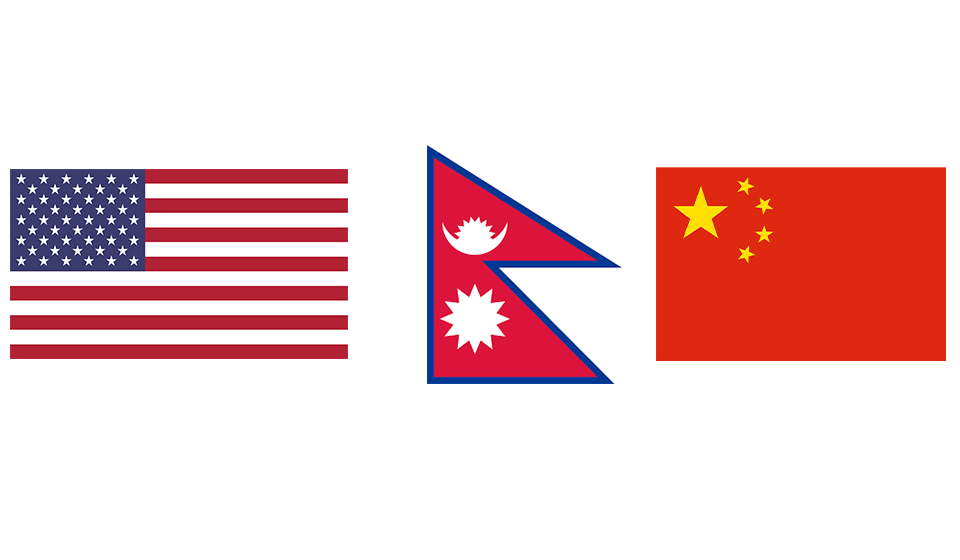 Rejecting both MCC and BRI would be economic nonsense because the country is in dire need of funds for its ambitions. Rejecting BRI and going on with MCC alone means that we remain sort of disconnected from the Chinese economy and increase reliance on the big bullying brother of the south. What if we reject MCC and align completely with the Xi path? That's also ridiculous, because China itself trades massively with the USA and gains a huge sum, though quarrels politically as hell. Accepting both the proposals seems an economic fun with a boom in infrastructure, but the political cost is huge.

Since times immemorial, rich city states have provided grants and aid to their poor counterparts as a part of their diplomacy with the so-called motto of mutual existence.  Diplomacy is best portrayed by Winston Churchill as the art of telling people to go to hell in such a way that they ask for directions. Similarly, the terms of grants are often recited as altruism and camaraderie, but the reality turns out to be a pure hypocrisy. The inherent vested interests are the only guiding posts. Though all of Nepal’s political leaders may understand this basic ‘funda’, aid and grant has red-inked our balance of payment accounts since long, trading off with Nepali dignity and pride.

When Nepal was being bamboozled by the development riddle in the 1950's, soon after it undressed the isolationist veil with the rest of the world, the point four program led by the USA got launched in the country with the key priorities of road construction, telephone exchanges and malaria eradication. Uncle Sam’s participation in the aid for Nepal has marked seven decades and it focuses on peace and security, democratic transition, health and poverty. And as per them, as a reward of smooth transition toward being  an egalitarian country, Millennium Challenge Corporation (MCC) compact was awarded to Nepal, to foster energy and transportation connectivity with neighboring countries. But, the subject has been a controversial buzz in Nepal, as it got diluted with the jejune jingoism rather than logical dissent.

The northern neighbor has a different story to share. After the great experiments of Mao Zedong (The Great Leap forward and Cultural Revolution) took the nation through unimaginable agony, China lately appeared for Nepal’s aid in the 1960's, but with limitations. This Asian Miracle is now on the verge of economic dominance in the world through its unique model of development, i.e., Beijing consensus. For its successful implementation, President Xi came up with the ‘Belt and Road Initiative’ to connect the missing dots of their historic economic legacy. But, if BRI comes close to ratification of big projects in Nepal, it will also face severe criticism and blockages from dissenters, following the recent trend. If peeps doubt American intentions, would they spare the Chinese?

With a foreign policy of ‘amity with all, enmity with none’, Nepal has vouched to join both the MCC and BRI. But, here comes the inevitable geo-politics to be managed concomitantly. When a powerful country slowly loses its power and a rising one grabs the fame of the new world order, there have always been tensions in history, often escalated into wars. The ongoing tragedy between world’s number one and two follows the same. With this, there is a genuinely idiosyncratic assignment to be done shortly by Nepal. In its aid, the author proposes the use of Game Theory, with a certain tweak.

What is Game Theory?

Game theory is a strategic framework to fairly analyze situations and consequences when two competing forces are involved and there is the need for optimal decision. Proposed by Neumann & Morgenstern in the 1940s and extended by John Nash, Game Theory’s elegance is demonstrated by the fact that 12 Nobel prizes are related to this masterpiece. The game of life is actually incomprehensible. But, this tool helps to organize you- when you don't know what the competitors are doing and when the choices given are not always promising. This helps to come up with a winning strategy in life.

In this case, the two competing forces in Nepal are USA and China, ceteris paribus. Both want to make a grip in Nepal and tilt this geo-strategic land into their favor. China is concerned with security reasons in Nepal over Tibet Tantrums and US containment while the USA considers China as the authoritarian force aiming to defenestrate poor nations into a debt trap. For Nepal, there are four choices as shown in the diagram, when it comes to relying on aid for development pursuit. 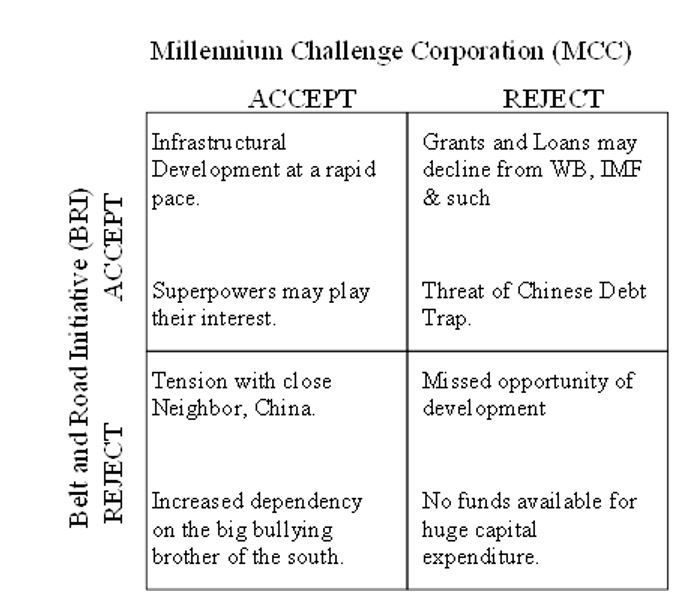 Rejecting both MCC and BRI would be economic nonsense because the country is in dire need of funds for its ambitions. Same as people, countries rarely encounter opportunities of development and they must capitalize on them. Nepal cannot afford to miss the huge funds flowing into the nation and building infrastructure that's much needed. Plus, this move will rotate us on the path that we followed a century ago, isolationism.

Next, rejecting BRI and going on with MCC alone means that we remain sort of disconnected from the Chinese economy and increase reliance on the big bullying brother of the south. After the series of blockades, an ordinary Nepali would fear even to think of that way. At no cost, Nepal can deteriorate the fresh love affair with China. BRI also seems to bring enormous projects home, so Nepal cannot afford to miss the networking synergy that comes from the revival of the ancient silk road.

Next, what if we reject MCC and align completely with the Xi path? That's also ridiculous, because China itself trades massively with the USA and gains a huge sum, though quarrels politically as hell. Moreover, giving a cold shoulder to Uncle Sam may mean a sharp decline in grants and loans from the WB, and IMF that facilitates our capital expenditure. Before rejecting Uncle Sam's proposal, one must necessarily gauge Nepal's revenue pot. We, as a nation, only earn money that's hardly enough to make up our current expenditure. However, the debt trap instances of Pakistan, Sri Lanka, Sudan, Ethiopia and many more suggest the sufferings of unilateral alignment.

Accepting both the proposals seems an economic fun with a boom in infrastructure, but the political cost is huge. There are many instances where countries are politically and economically tattered due to external interventions. With the existing vulnerability of geo-strategic position, the undermining of sovereignty is, and must be, a big question for Nepal. If haphazard entrance is allowed to Superpowers in any way, they can play their interest, making this Shangri-la a geopolitical playground.  So, what’s the way out?

In the status quo, there is no Nash equilibrium (best optimal outcome) for Nepal in this game. All the above mentioned choices include both pros and cons. The dilemma that currently exists in Nepal is absolutely valid, as both the arguments and counter arguments for and against the projects are true. This doesn't mean, we should not pursue Nepal’s equilibrium. It’s crystal clear that ‘Off the cuff’ signing of the MCC agreement by the previous government is the major cause of the recent tension. The best thing that a conscious citizen can do for Nepal is to bring out the points of concern and coerce the politicians to amend the agreement as soon as possible, so that it does not undermine our sovereignty. The beauty of diplomacy must scintillate our national urge during a crisis, and we must demand it from the bureaucrats unlike the present silence. Accepting the projects, while not allowing superpowers to play in our fields, by the use of strategic diplomatic arsenals and negotiation skills is the way Nepal can attain its equilibrium.

Lastly, going through all this Ramayana, if you still insist an outright rejection of MCC or BRI (in future), then the author can only assume the nation's fate in the hands of Pashupatinath.

'Tibet's role important for implementation of projects with China'