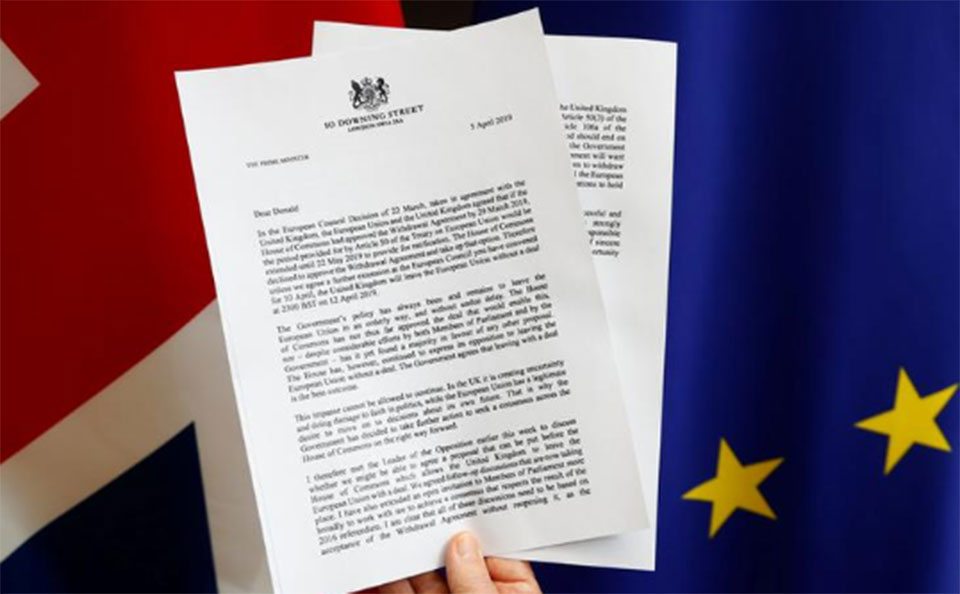 LONDON/BRUSSELS, April 5: British Prime Minister Theresa May wrote to Brussels on Friday asking for a delay of Brexit until up to June 30, while saying she aims to get Britain out of the EU earlier to avoid it participating in European elections.

But Donald Tusk, who chairs EU summits, has proposed a longer Brexit postponement of one year for Britain’s feuding politicians to agree and ratify a plan, EU officials said.

Any such extension would still require unanimous approval of the other 27 EU countries and some, notably France, suggested they wanted a better justification from London for its request.

Britain is now due to leave the EU in a week, but May has been forced to seek more time after Britain’s parliament repeatedly rejected her withdrawal agreement.

Her Conservative Party is deeply divided, as is the main opposition Labour Party, leading to a bewildering marathon of inconclusive votes in parliament that stretched Britain’s centuries-old unwritten constitution to its limits. Scenarios running the gamut from abandoning the EU abruptly with no deal to cancelling Brexit altogether have all gone down to defeat.

Obscure parliamentary procedures have been resurrected, providing daily drama from the House of Commons but making the future of Britain’s biggest change in generations no clearer.

After finally recognising that her minority Conservative government could not push through a Brexit deal on its own, May started talks this week with Labour leader Jeremy Corbyn in the hope of coming up with a cross-party solution.

But that means accepting the need for more time, including the possibility of Britain holding European Parliament elections on May 23, which May has long hoped to avoid at all cost.

“The United Kingdom proposes that this period should end on 30 June 2019,” May said in the letter.

“The government will want to agree a timetable for ratification that allows the United Kingdom to withdraw from the European Union before 23 May, 2019, and therefore cancel the European Parliament elections, but will continue to make responsible preparations to hold the elections should this not prove possible.”

CLIFF EDGE
But there seems to be little appetite in Brussels for an extension that could create another cliff edge in three months. May asked two weeks ago for an extension to June 30, and the EU turned her down.

Tusk, who will convene EU leaders on Wednesday, is planning to propose an extension of a year, senior EU officials said. As in May’s proposal, the extension could be halted early if Britain ratifies the withdrawal agreement.

“The only reasonable way out would be a long but flexible extension. I would call it a ‘flextension’,” an EU official said.

“It seems to be a good scenario for both sides, as it gives the UK all the necessary flexibility, while avoiding the need to meet every few weeks to further discuss Brexit extensions.”

The drama in Britain’s parliament - where governments normally control business and rarely hold votes unless they will win - has no modern precedent.

One vote was the biggest government defeat in history. Another was won by a single vote after a lawmaker, on parole from prison, turned up with an ankle tag. One Conservative choked back tears and stormed off the party benches as he quit the party on the floor of the house.

Friday offered a respite, with no business scheduled in parliament. But more talks were planned between staff of May and Corbyn. May’s spokesman said there would be no time limit but the government’s aim was to produce a deal that could be ratified in time to leave the EU by May 22.

“TACTICAL MANOEUVRING”
France, which wants the EU to move on to other business including a package of reforms proposed by President Emmanuel Macron, indicated it was not ready to accept an extension unless Britain presented a clear plan for the future: “We’re not there today,” a source close to Macron told Reuters.

Finance Minister Bruno Le Maire told reporters in Bucharest: “If we are not able to understand the reason why the UK is asking for an extension, we cannot give a positive answer.”

Other European politicians signalled they want to give Britain time to rethink, but were sceptical of May’s proposal to create another new hard deadline at the end of June.

Norbert Roettgen, head of the foreign affairs committee in the German parliament, backed Tusk’s proposal to allow up to a year. He said May’s deadline of June 30 made no sense and was motivated by “domestic tactical manoeuvring”.

Britain voted 52 percent to 48 percent to leave the EU in a 2016 referendum and its two main parties both committed to delivering that outcome. But they never settled on a plan for how to leave or what future relationship to seek.

May offered to quit last week to get her deal passed but it was defeated for a third time last Friday. That prompted her latest gamble: talks with Corbyn, a stunning about face after nearly three years of insisting that her terms were the only viable plan. The move split her cabinet and infuriated the most pro-Brexit wing of her Conservatives.

Labour too is divided. It is officially committed to leaving the EU but with closer ties than May has sought, including a customs union, which May has so far ruled out. Many Labour lawmakers also want to put any agreement to a second public vote, a potential path for Brexit to be rejected altogether.

Corbyn has been difficult to pin down on whether he would insist on a new referendum, but his deputy Tom Watson said the party would have difficulty backing any deal without one. 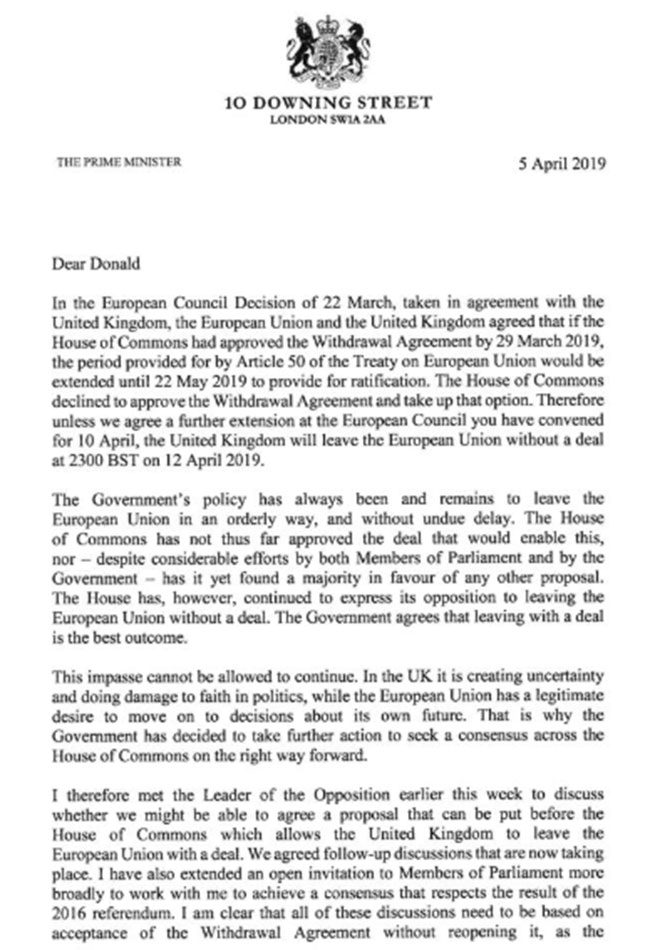 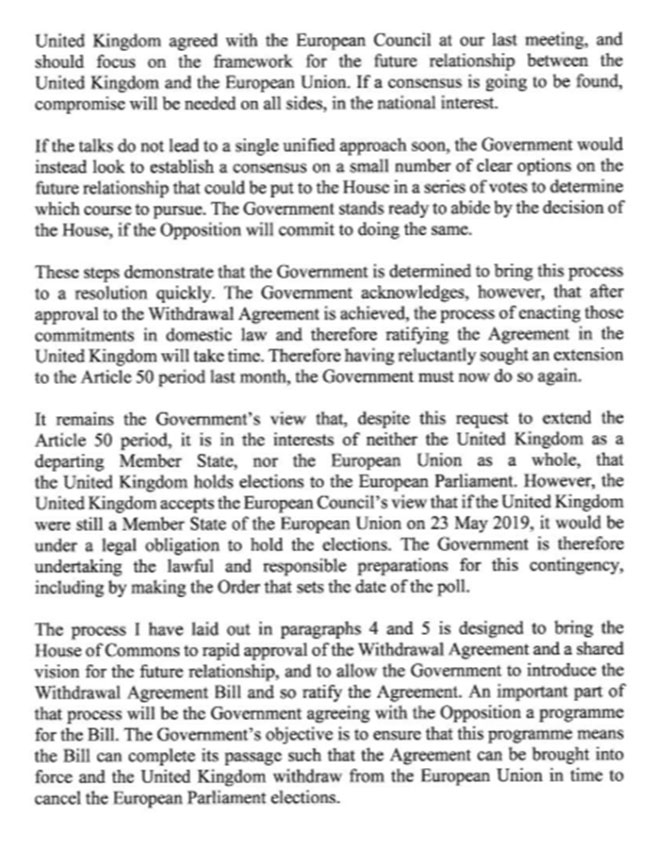 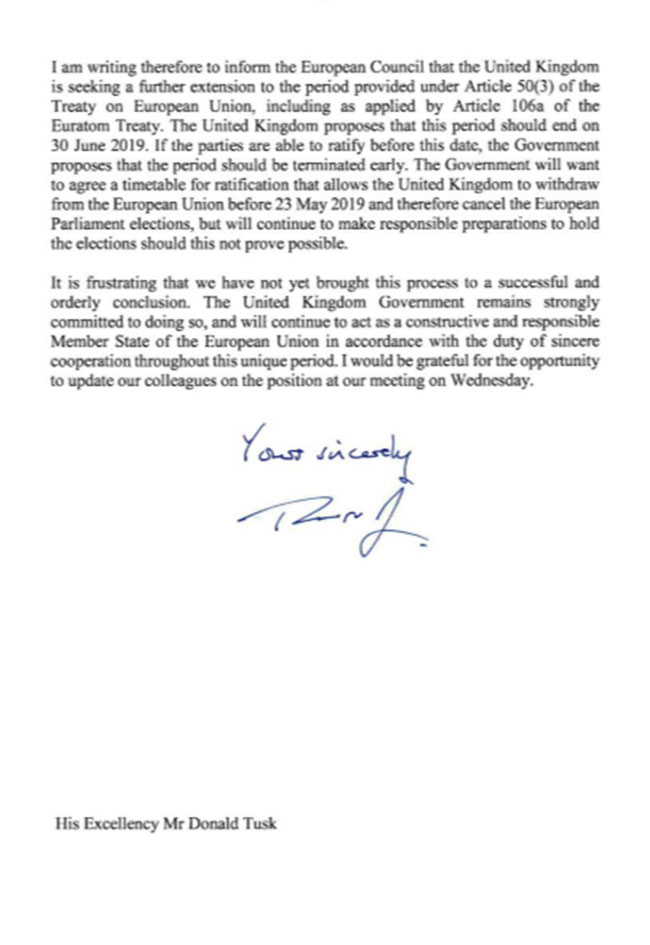 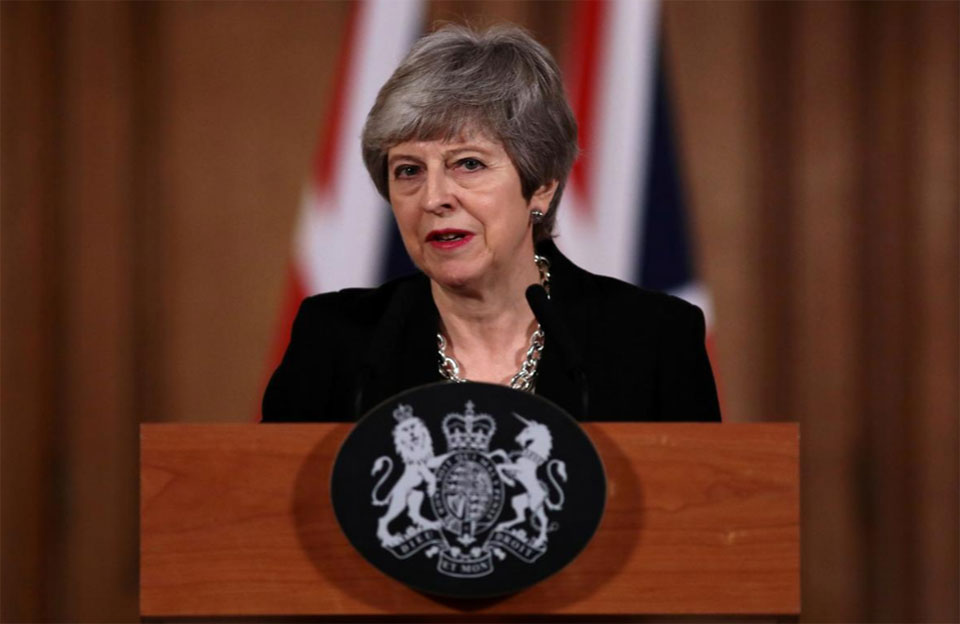 Imported chemical fertilizers being supplied to districts
20 minutes ago