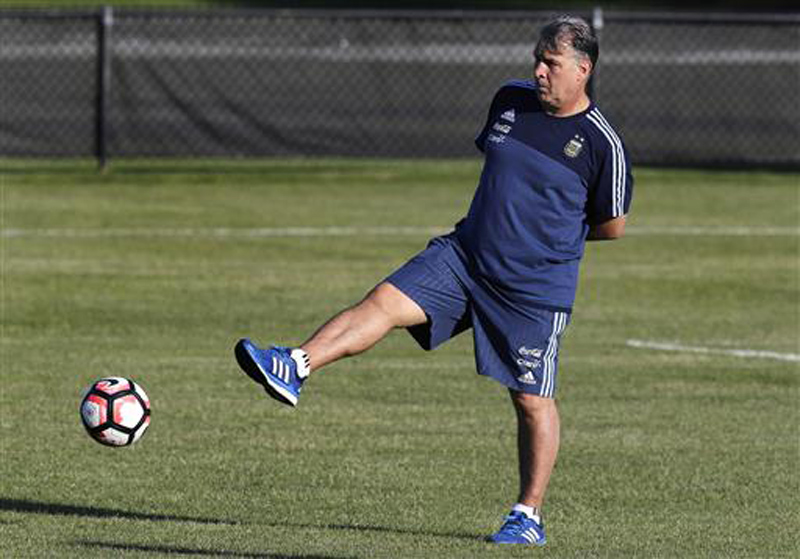 Argentina moved quickly to name a new coach for the Rio de Janeiro Olympics, only a month away.

Juan Sebastian Veron, president of the Estudiantes club, confirmed that Julio Olarticoachea, who was a defender on the Argentine squad that won the 1986 World Cup and has been coaching the country's youth teams, would replace Martino in leading the Olympics team.

The Argentine Football Association announced Tuesday that Martino, who had coached the team since August 2014, had stepped aside. He took over after the loss to Germany in the 2014 World Cup final and lost to Chile in the Copa America finals of 2015 and 2016.

His departure was another blow to the national team after the shock international retirement of star player Lionel Messi after the latest Copa defeat.

AFA's statement said Martino's "coaching team was resigning" because of the confusion surrounding the governance of AFA and for the "serious problems involved assembling a team to represent the country in the upcoming Olympic Games."

At this point, Argentina has only nine players on its Olympic squad, and the president of the Argentine Olympic committee has hinted the country may not be able to send a team.

In addition, the Argentine federation is facing charges of financial corruption and mismanagement.

Gerardo Werthein, president of the Argentine Olympic committee, said he hoped a team could be assembled for Rio de Janeiro despite some clubs balking at releasing players.

"I have started talking with the football leadership, some club presidents," Werthein said. "The clubs and the people who lead them are more responsible (than AFA). We have worked hand-in-hand...for Argentina to have a team."

Argentina's men's team's first game at the Olympics is against Portugal on Aug. 4.

Martino was previously the head coach of Paraguay, taking the team to the quarterfinals of the 2010 World Cup and a runners-up finish in the Copa America.

After a spell with Newell's Old Boys, where he spent most of his playing career, he had a season in charge of Barcelona before taking the Argentina job.