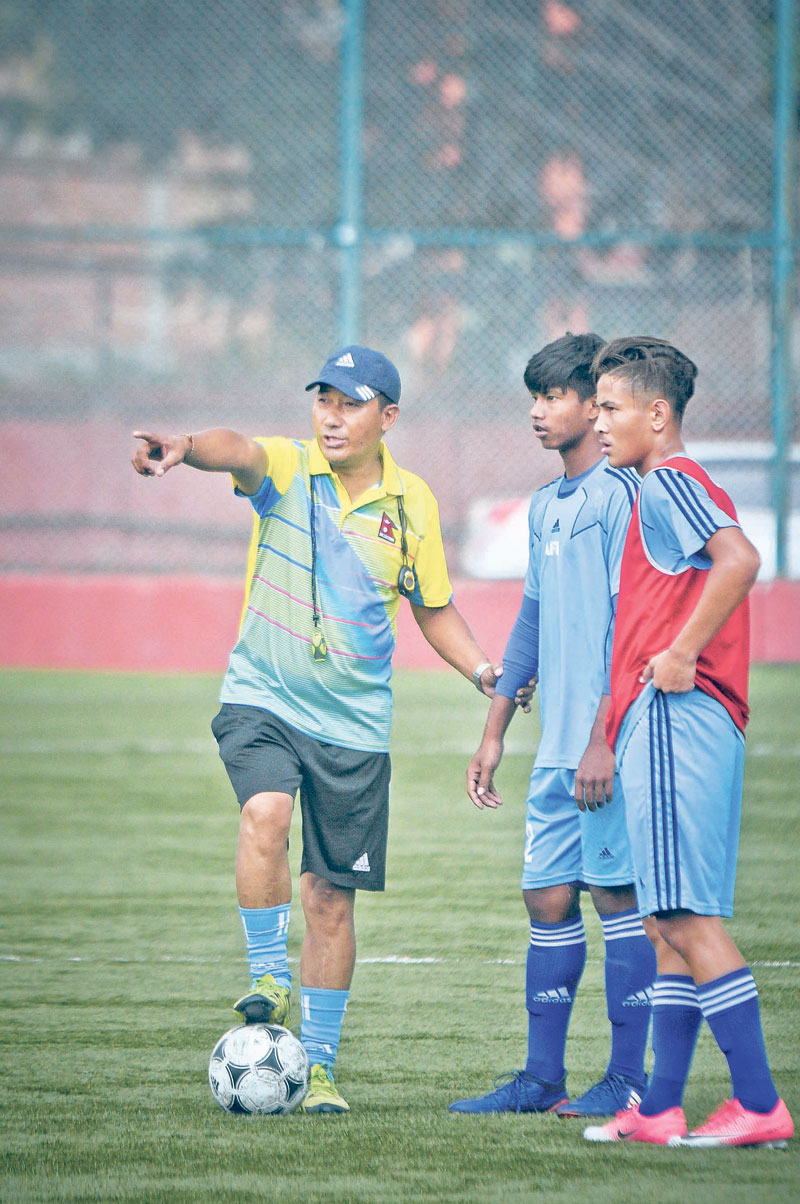 KATHMANDU, Sept 12: Tshering Lopsang is one of the most successful coaches in domestic football as he has led Manang Marsyangdi Club (MMC) to win several tournaments including A Division League.

Last year he guided heavyweight MMC to the tittles of important domestic tournaments including Aaha-Rara Gold Cup, Jhapa Gold Cup and also led the club to the semifinals of the Sheikh Kamal International Club Cup held in Dhaka, Bangladesh.

Lopsang, the proven coach in domestic football, is now set to go through different test as he has been given the responsibility of coaching Nepal U-18 football team which is currently preparing for SAFF U-18 Championship to be held in Bhutan.

The championship to be played at Changlimithang Stadium, Thimpu, from 18 to 27 September will see Nepal competing with the host Bhutan, India, Bangladesh and Maldives.

“As I have been able to win almost all domestic tittles for MMC, I have somehow proved my ability. But now the national duty is something different and it is going to be very tough and challenging,” said Lopsang.

“My success in domestic football is now going to be compared with the results I will deliver during my duty for the national team so it is not going to be an easy task for me.”
The SAFF U-18 Championship is a replacement of U-19 Championship. The first edition of the championship was held in Kathmandu two years earlier, which was won by Nepal.
The host team had defeated India on the penalties in the summit clash at ANFA Complex ground, Satdobato, Lalitpur.

Lopsang says overcoming the strong India to retain the title this time will not be an easy task. “Obviously India will be a tough opponent this time as well. We must work hard to perform better than them in the competition,” said Lopsang.

A total of 27 players are in closed camp for the last two months to prepare them for the championship.

Lopsang had called up 74 players to preliminary phase of selection and later they were downsized to 35 and kept in closed camp. Lopsang then trimmed the squad to 27 who are now kept for the last phase of preparation. All the players were called on the basis of their performance in Lalit Memorial U-18 Championship held in June.

However Lopsang is not fully satisfied regarding the ongoing preparations. “Our preparation period has been shorter than India who has been preparing from last one year for this competition. We should have started the preparation much earlier,” rued Lopsang.
The game experience of the players is another concern of Lopsang. “The players we have in squad are in age of playing regular football. But due to the absence of league and other regular tournaments they haven’t got enough platforms to play and it is not going to help us,” said Lopsang.

However he said his team is committed to defend the title. “Despite all the challenges, we are focused only on winning the championship again,” added Lopsang.

Since the Sri Lanka has withdrawn from the championship, Nepal and Maldives are two remaining teams in group B while Bhutan, India and Bangladesh are pitted in group A.
Any result – win, draw or defeat—against Maldives will take Nepal to the semifinals of the championship but head coach Lopsang doesn’t see it as an opportunity. “It is not beneficial for us. With Sri Lanka’s withdrew, we will be able to play just one match in group stage which is not positive,” said Lopsang. “More matches you play and win in the group stage, more confidence the players can gain,” he said.

Lopsang further said that the regular training at ANFA Complex is focused on the tactical part of the team. Nepal will play in the 4-4-2 formation in Bhutan with the objective of dominating the ball possession giving emphasis for short passes. “I am telling the players to hold the ball possession more than the opponent because holding the ball in your feet for the longer time helps you create higher number of the scoring chances,” further added Losang.

“In the past, I had the responsibility of making the MMC fans happy, now I must make whole nation proud, and I am committed to do so,” concluded Losang. “I am equally excited too.”