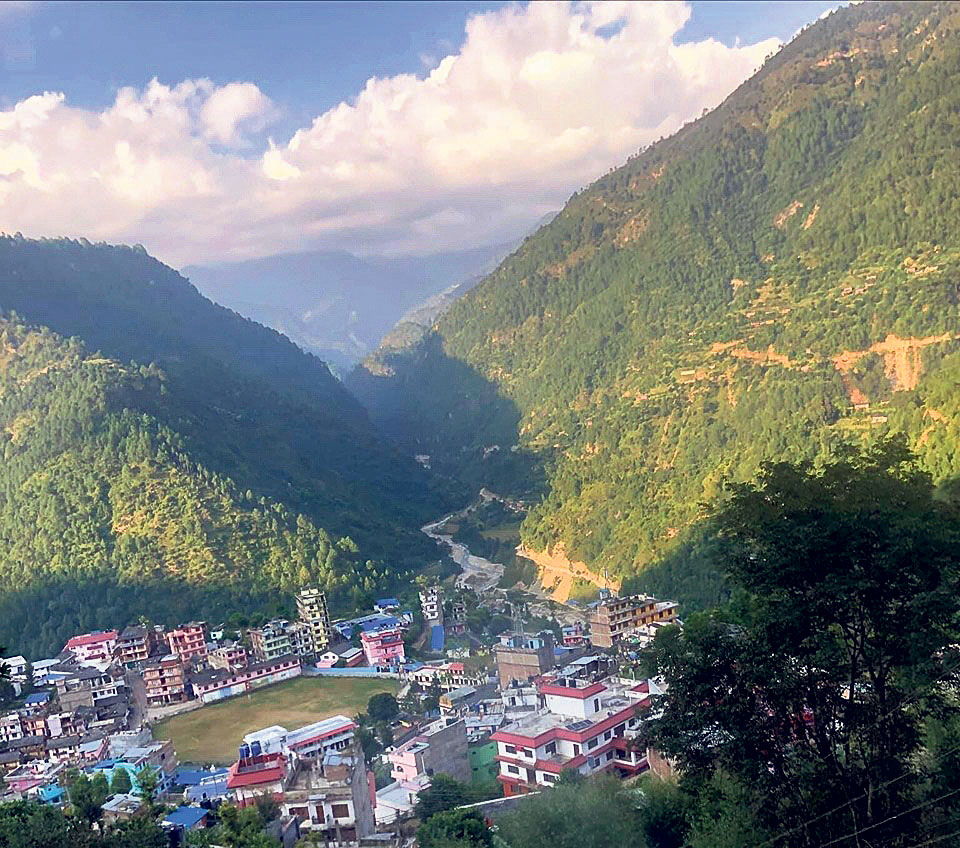 A view of the Libang bazaar, Libang Municipality in this file photo. Photo: Republica

Developmental works snail paced as four months of the fiscal year pass
ROLPA, Nov 24: The need to get rid of the practice of ‘Asare Bikash’ (expediting developmental works only towards the end of the fiscal year and completing them in a rush) has been stressed time and again. People in general, as well as political parties, leaders and government in the past and the present, have been quite vocal about reviewing this kind of performance.

However, as soon as a fiscal year ends than the authorities go in a slumber and wake up only at the end of the year again. While this trend has been common across the country, Rolpa has not been an exception.

The new fiscal year begun in July and so far the developmental projects in the district have not headed anywhere. One-fourth of the projects were supposed to complete by now.

According to Himal Ghartimagar, accountant at Thabang Rural Municipality, there has not been any substantial work so far. And it is because the resources have not been allocated for different projects clearly. “We cannot put the blame for this on anyone. In fact, the resources have not been clearly allocated for different projects. Once that is done, works will start,” said Ghartimagar. “It is true that the delay will affect the projects,” he added.

Even though many other government and non-government organizations are active in Rolpa and flaunt of their plans and programs, it is the local authority that holds maximum budget and is responsible for basic infrastructural development and public services.

And the local bodies report that the four months of the new fiscal year have been spent ‘without doing anything’ about roads and other infrastructures. Technicians state that they have not completed preparing estimates for several projects.

“By now, we should have completed one forth of work, but the work has not is still to start,” said an engineer at Rolpa Municipality Mukesh Kunwar. “There are only few technicians here and there is a lack of human resource to work on those projects,” he added.

According to Kunwar, insufficient number of technicians and workers badly hit work projects and more so when the works are not started on time. When they work under pressure at the 11th hour, desired results are simply impossible.

“Considering the lack of technicians or the required work force, we should have expedited implementation of the projects from the beginning of the fiscal year. But as this is not happening, it is not hard to predict that the projects are going to suffer at the end,” he added.

In Thabang Rural Municipality, the authority has not even distributed social welfare allowance. While there are around 300 projects under the rural municipality, memorandum of understandings has been signed with concerned parties only in 50 of the projects.

Basantaraj Neupane, accountant at Sunil Smriti Rural Municipality said that the consumers’ groups have not been active. And this has hampered the work progress. “Without the coordination from the consumers’ committee we cannot move ahead. They have not paid heed to the urgency,” he said.

“Our chief administrative official has not been appointed yet. And so our daily performance as well as important projects are being affected,” he said. “By rule, we were supposed to complete certain percent of the projects by now, but things have not moved forward so far,” he added.

According to Gaire, both the provincial and federal government have failed to show due seriousness regarding developmental works. There are many roads and bridges where the local level has to work in coordination with the higher authorities. But the lack of coordination has let them down, he claimed.

“We have very limited budget, in all big projects the provincial and the federal government are involved and without their coordination, things cannot move forward,” he said. “So, it is not just us who is responsible for the lethargic implementation of development projects,” Gaire added.

Shahid Marga, a major road project is in a limbo too. Last year, Rs 220 million meant for the project was frozen. According to the project chief Sadhusharan Purbe, he himself is not satisfied with the work progress. And he puts the blame on contractors.

“This delay is due to contractors. They do not work on time,” he said. He added that the only work the labors are doing is clearing the debris on the road track.

Last fiscal year, over Rs 730 million of the total budget meant for several projects was frozen in Rolpa.

Rolpa records over 50 per cent homebirths

ROLPA, March 19: Over 50 per cent births in Rolpa still take place at home, though the government has implemented... Read More...