Many Nepalis in US uneasy about Trump 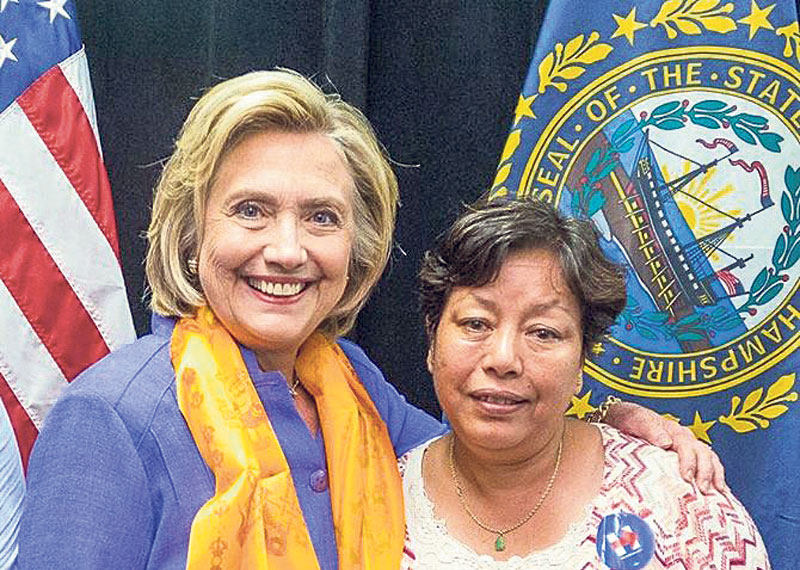 Madalasa Gurung with Hillary Clinton, the Democratic Party’s candidate for US president, in this recent photo. Gurung (Democrat) is running for the office of New Hampshire State Representative from District 24, Merrimack. (Photo: Madalasa Gurung's Facebook)

BOSTON, Oct 29: Madalasa Gurung, who came to the United States of America in 1999, is running for the office of New Hampshire State Representative from District 24, Merrimack of the state.

"I am an American citizen now. If I want to get into politics, I have to be involved in the politics of the US. I can bring change here through politics but not back in Nepal now," said Gurung who was attending Democratic Party rally in Manchester earlier this week.

Madalasa is contesting in the election with a slogan of 'I am a doer, not a talker.' She is an example of Nepali migrants expanding their roots in the US, especially in politics.

However, the 2016 election has generated some fear among the immigrants living here as the Republican presidential candidate Donald Trump has been making harsh comments about immigrants.

Trump talks about building a wall at the Mexican border and has been making harsh comments about Muslims and other immigrants. He also calls for extreme vetting for people from certain areas of the world.

"Surveys of Trump voters have found that the characteristic they are most likely to share is racial resentment. The feeling is that African Americans, Latinos and immigrants in the United States receive undeserved benefits and recognition which white Americans do not receive but are expected to pay for," said Michael Weiler, a faculty member at Emerson College in Boston.

However, Dr Weiler opined that the Republican notion toward immigrants is a false one. "Mexican migration has slowed down to nothing. Immigration is not what affected jobs creation and economy but Republican are in a dilemma and dealing with an imaginary problem of immigration in this election," Weiler added.

Trump supporters yet believe that immigrants, including refugees, pose a threat to the security of their country.

"I don't have nationwide data but still I can say that a huge majority of voters of Nepali origin will vote for Hillary. Nepalis living here are support the agendas of the Democratic Party as it is more responsive toward immigrants," said Som Gurung, who lives in New Hampshire.

Trump tweet raises questions about why he fired Flynn

Although Trump is fighting a regular election as a nominee of the Republican Party, he is not considered a standard bearer... Read More...

Govt urges shopping malls, restaurants and hotels to test their staff for COVID-19 at their own expenses
15 hours ago