Manchester City battle back for crucial win over Chelsea 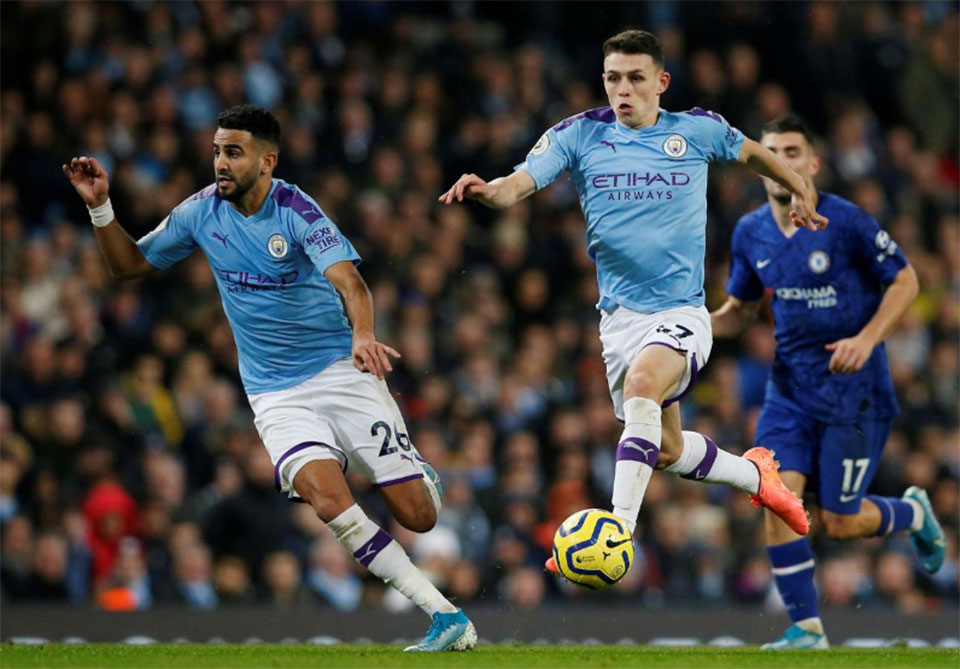 MANCHESTER, England, Nov 24: Manchester City returned to winning ways with a 2-1 success over Chelsea at the Etihad Stadium on Saturday, ending the Londoners’ run of six straight victories and keeping Pep Guardiola’s side nine points behind leaders Liverpool.

City’s loss at Anfield before the international break made this a key game but they had to work for their three points, coming from behind against Frank Lampard’s enterprising side.

Chelsea midfielder N’Golo Kante had given the visitors the lead but a deflected strike from Kevin De Bruyne and a fine Riyad Mahrez effort put City in front before halftime.

“Chelsea are an incredible team, we knew it but we beat them,” said City manager Guardiola.

“It was a typical high-level game. Our back four played so good today. In the most difficult period of the game we scored on the counter. We created enough chances to score more goals.”

It was a game where Chelsea showed, once again, that they are a team with huge potential but not yet the steel and defensive solidity to compete with the very best.

While City will be relieved to have emerged with the points, Guardiola will be concerned that his team still look substantially short of their top form.

The Spaniard made five changes from the loss at Liverpool with, most significantly, keeper Ederson returning from injury.

Chelsea welcomed Jorginho back into their midfield and American winger Christian Pulisic was passed fit despite having struggled with a groin injury.

Lampard’s side started brightly, bubbling with confidence and moving with such speed and invention that City were struggling to keep up but it was a move of direct simplicity that opened the scoring in the 22nd minute.

Mateo Kovacic superbly picked out Kante’s forward burst and the French midfielder held off compatriot Benjamin Mendy before smartly slipping the ball past the advancing Ederson.

But six minutes later Belgian midfielder De Bruyne got the champions level when the ball fell to him on the edge of the box and he wrongfooted the defence and unleashed a low drive which took two deflections before rattling past Kepa Arrizabalaga.

Chelsea had looked the slicker and sharper of the two teams — and indeed enjoyed the rare status of having more possession at the Etihad - but it was Guardiola’s side who went in with the advantage at the break.

Mahrez cut in from the left and, with Chelsea’s defence backing off, drove a left-foot shot into the far bottom corner.

Chelsea nearly put themselves out of the game two minutes before the break when Kepa gifted the ball to Sergio Aguero but the Argentine’s shot from distance crashed off the bar.

AGUERO WORRY
A limping Aguero had to be replaced by Gabriel Jesus in the 77th minute and Guardiola said he appeared to have a muscle injury.

“It doesn’t look good,” said the Spaniard. Aguero will undergo tests on Sunday but could face several weeks out of the side.

Inevitably there was some VAR controversy before the end, with Raheem Sterling’s stoppage-time effort ruled out for what appeared to be a very tight offside call.

The encounter was the first home match under Guardiola that City did not enjoy the majority of possession — they had just 46.7 percent.

“We were controlling the game, we were playing some great stuff and we felt in control but you can’t be absolutely in control against Manchester City,” said Lampard.

“It was bad luck for their first goal, and absolute quality from Riyad Mahrez for the second and that changed the game.

“Maybe we were a bit slow with our movement at the back, I know we were giving them a good game but I am disappointed with the small details.”

City keep in touch with leaders with win over Fulham