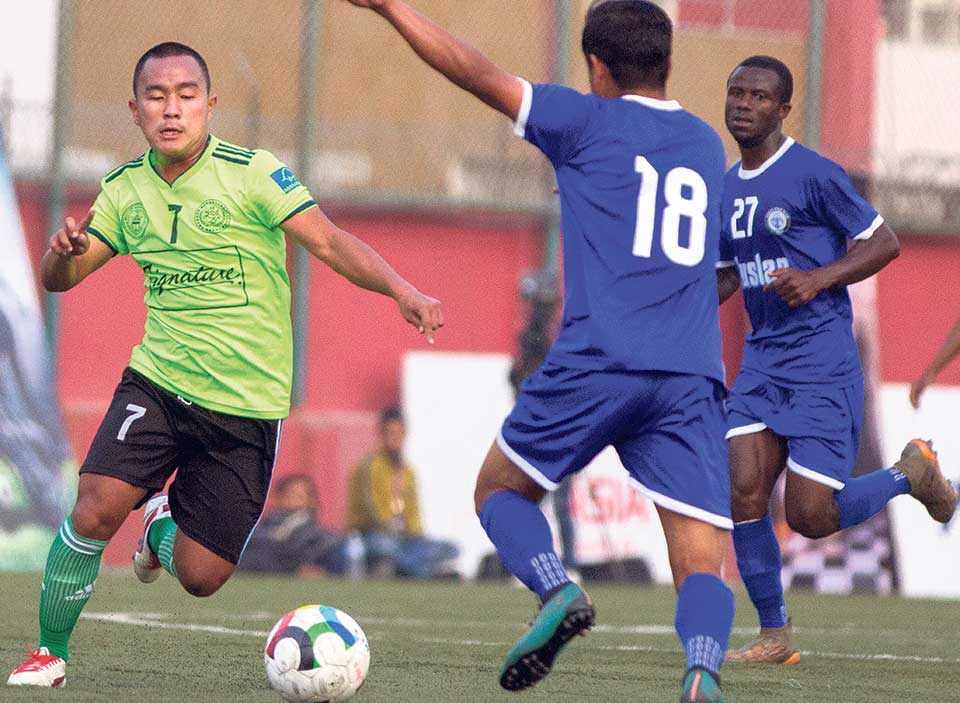 KATHMANDU, Nov 23: Signature Manang Marshyangdi Club has leapfrogged Ruslan Three Star Club to go top of the table with a 2-1 win in the ongoing Martyr’s Memorial A-Division League in Lalitpur on Thursday.

Earlier, Valley Chyasal Youth Club registered its first win of the league with a 5-1 win against New Road Team (NRT) on the same day at the ANFA Complex in Satdobato.

Manang looked a superior force in the first half attacking from left to right with long balls and catching Three Star on the break. It started positively in the second minute when captain Biraj Maharjan crossed the ball, Anjan Bista controlled it superbly and his shot hit a defender on the way for a corner.

The game took its pace with Three Star played one-two which saw Anil Gurung freed Ajayi Martins into the box, and Martins shot was saved by Manang keeper Bishal Shrestha in the third minute. The incident injured both Martins and Shrestha.

Manang began to dominate the possession of the ball with its explicit passing, but the game was played only in the middle area of the pitch. Three Star was trying to take advantage of Manang.

A moment of brilliance from Heman Gurung brought the first goal of the crucial title contenders’ clash when Gurung put a long ball forward to the right to Bista, and coolly volleyed past keeper Alan Neupane into the left bottom corner in the 11th minute.

Gurung was again in the thick of things when he produced a long ball looking for Adelaja Somide Oluwa Wijnmi. Adelaja and keeper Shrestha both ran to get the ball and Shrestha tried to hit the ball, but it hit Adelaja and slowly went inside the post in the 18th minute. Three Star captain Bikram Lama tried to clear the ball, but failed to do so.

Manang got its tactics just right inside the first 30 minutes of the match with goals almost securing its victories, but there was a lot still to play in the game with Three Star looking threatening and cautious after the second goal went in.

Three Star got a free-kick in the 22nd minute and Ranjit Dhimal hit the ball over the bar. Three Star coach changed things which fit his gameplay with Nirajan Khadka going out and was replaced by Messoumbe Abang Albeit.

Three Star then started to attack more. It got a free-kick again after Suraj BK handled the ball with his hand. Sunil Bal hit the ball wide in the 39th minute.

It got a chance again as Bal hit a shot from outside the box, but was saved in the 41st minute, followed by Buddha Chemjong’s shot a minute later which went wide after Martins knocked a ball forward to him.

The second half could not promise more of the same, as both teams began to explore their own ideas. Manang was comfortable sitting back and hitting Three Star on the break, while the losing side attacked more from the flanks with more threatening crosses.

Bal got a chance inside the box, but his shot was saved by keeper Shrestha in the 56th minute.

Manang finally got a chance in the second half when Bista crossed the ball to Adelaja, but his header was saved by Neupane.

The game did not quite take the pace in the second period with the ball being played only in the middle with little chances from the both sides. Finally, Three Star got a penalty and its way back in the game.

Manang’s Indian recruit Muhammed Asif fouled Martins inside the box after he tried to head the ball and climbed above Martins. Referee Sudish Pandey, who served a 14-match suspension for his controversial decision in the very first match of the tournament, pointed towards the spot in the 84th minute.

Dhimal stepped up to take the kick and slotted the ball past keeper to bag a goal back for Three Star.

Three Star then attacked more with crosses from every areas of the pitch, but all were either saved or cleared by the Manang defense.

Manang coach Suman Shrestha said that he is happy with the win as his team came for that, but accused the referee of being afraid to take decisions.

“We got what we came for and we are happy with the win. This is a very important three points and everyone played as expected. The midfield did not quite work as it was expected, but we played as a whole team for the win,’’ Shrestha said. “The league really needs to improve the quality of the referees. It’s not good at all. I feel he was afraid to take decisions because of his suspension.’’

Three Star head coach Megh Raj KC said that his team has not lost the grip on the title just because of this loss, and he also accused the referee for the same reason.

“The title has not gone away from us because of this result as this is just the third round, and we still have 10 more to go. We tried to win, we worked hard, but the goals did not come as we expected. Manang worked very hard against us, they scored two lucky goals and we were punished because we could not convert our chances,’’ KC said. “I am amazed of the fact that we did not get a penalty in the first half. The referee was suspended for his decision in the first match and I think he feared to make a decision as it would get him into controversy again. He has a lack of confidence and low decision making.’’

In the earlier game, two goals each from Bimal Gharti Magar and Amir Shrestha, including a strike from Santosh Sahukhala bagged a 5-1 win for Chyasal over NRT.

Shrestha scored his first goal after Magar put a through ball inside the box to Sanjok Rai, and he crossed the ball into the far right to Shrestha, who slotted the ball past keeper Sojit Gurung in the 14th minute.

Shrestha bagged his brace in the 28th minute as Rai crossed the ball again to the right, Shrestha came from behind into the box and slotted the ball into the bottom left corner.

Bimal added the third for Chyasal as Hemant Thapa Magar crossed the ball, Rai put his head to it and Bimal provided the header again to score in the 57th minute.

Sahukhala beat a defender and a keeper on the way and scored in the 64th minute from a Bimal pass to make it 4-0.

Bimal scored the fifth Chyasal’s goal in the 86th minute after Hemant crossed the ball from just outside the box, and Bimal volleyed past keeper Gurung.

NRT bagged a consolation in the second minute of the added time as Moshood Opeyemi Agboola scored for the losing side.

Chyasal head coach Raju Kaji said, “We had to win today and we played like the team who wants to win. We looked confident. I said to my players that if we do not win today, we won’t reach our target.”

NRT coach Shyam Mali said,” Chyasal is a good team. We have a couple of players missing because of injuries and suspension. We will be back. We wanted to get a win, but because of the lack of some players, we could not.’’