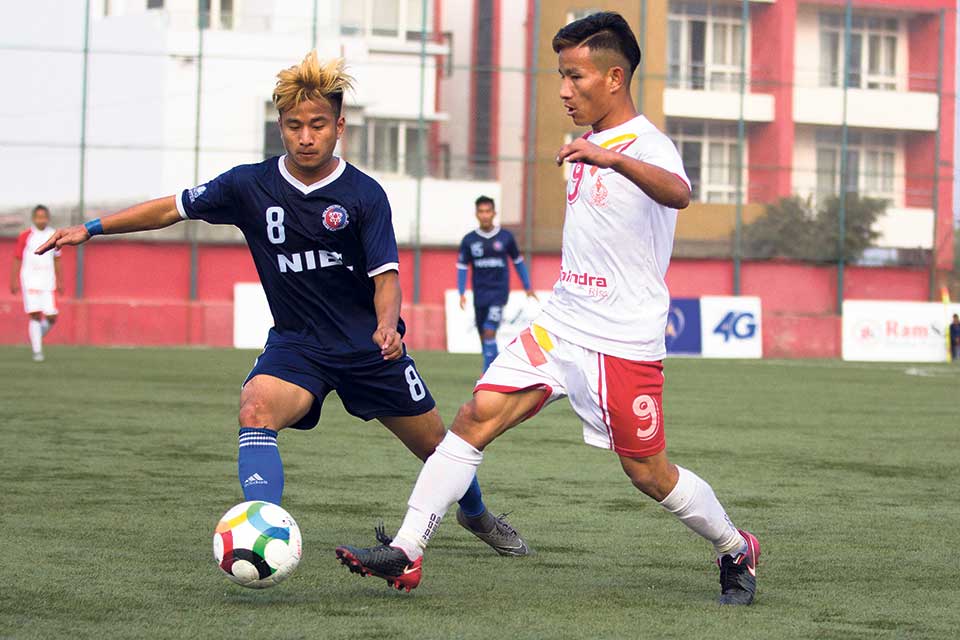 On the last day of the second round match played at the All Nepal Football Association (ANFA) Complex in Satdobato, two second half goals from Cedric Aba pushed Sankata to its second win of the tournament.

The first half was not that pleasing from both Sankata and Jawalakhel as both the teams looked uncomfortable on the ball and failed to settle their play with too many giveaways. Both teams could not do well in the final third of the pitch.

The first half saw little promise from Sankata that had defeated Saraswati Youth Club 1-0 in its first match.

Sankata’s Maxwell Elon fouled Adama Doumbia in Jawalakhel’s area in the 17th minute and was shown the first yellow card. Just after a minute, Elon fouled the same player again and was given the marching order.

Jawalakhel then began to take advantage of the number, but could not capitalize on it. Doumbia headed a corner in the first half injury time, but it was saved by Sankata keeper Raja Babu Thapa.

Then it was all Sankata and a good passing near the edge of the box with quick one-two movements that confused Jawalakhel defense. Suvash Gurung passed the ball to Aba in the box, and he finished into the bottom corner to give Sankata the lead.

Sankata scored again in the 85th minute as captain Saroj Dahal led the counter attack, passed the ball to Laxman Ruchal in the right hand side. Ruchal went inside the box and passed the ball to Aba, who scored his second goal with a cheeky finish into the right bottom corner.

Jawalakhel got chances to score, but could not take advantage of lesser number of the opposition. Olalekam Afeez Lawal hit a shot from just outside the box in the 72nd minute, but it went straight to the hands of the keeper, while he shot again from outside the box, but the shot went over the bar in the 84th minute.

Sankata head coach Salyan Khadgi said that the game was tough, but the poor decision of the referee did not let his team take full control of the game.

“The game was really tight. The referee made a poor decision because the first incident was not a yellow card offense. When a player is on a booking, you give him warning first, then show the second yellow,’’ Khadgi said, “The boys did well and they did not play like we were a man down.’’

Jawalakhel head coach Raj Kumar KC said that his team got only a week to train after Tihar and they were not physically fit.

“My players did not play under my instructions, they played their own game and it did cost us. They were not physically fit. The foreign players are good, but they are not coordinating with the team,’’ KC said, “The opponent looked organized while we were not. We need to work on that front.’’

In the other game in Lalitpur, a late winner from Prabin Syangtan helped APF register a 1-0 win over a motivated NIBL Friends Club.  The result does not tell the full story of the game as Friends looked like a better side as it threatened the departmental side with its quick counter attack in the second half.

It was all APF in the first 20 minutes or so. APF’s Roop Bahadur Lama hit a shot from outside the box, but Friends’ Bangladeshi keeper Mohammed Nurul Karim made a brilliant top hand save to deny him in the 13th minute. Likewise, APF nearly scored a goal a minute later as Janak Koirala gave the ball away inside his own box, but Syangtan’s shot from the left side was saved by Karim again.

Syangtan got another chance from a through ball as he chased it, took it past Karim who came out of the box and cleared. Nabin Lama shot the ball from near the half way line, but it was saved again.

APF’s Bishwas Udas crossed the ball into the box in the 28th minute which looked like going inside the post, but Karim made a good flying save to deny him.

Friends looked motivated to score in the second half as it attacked more, but the final ball was missing.

Fofana got a chance as he took the ball in the left side cutting past two defenders, but his shot was saved in the 54th minute.

APF got other chances in the second period as keeper Yogi hit the ball all the way to the other end, Syangtan got the ball, but he was denied again by Karim in the 54th minute.

APF scored the goal in the fifth minute of the added time as Yogi knocked the ball forward again and Syangtan lobbed the ball when Karim came ahead to pick it up.

APF head coach Rajendra Tamang said that his side came for the win, and they made it.

“We won the match with ball possession. We got an advantage of Friends as they had the young side. We have a finishing problem, but building from the back helped us a lot,’’ Tamang said.

“We conceded the goal as we were poor in handling the situation in the last minute,” Friends head coach Ramesh Maharjan said. “The lack of experience hurt us, but we will be fielding almost the same team for the entire season. It’s not a problem for us.’’

In the third game which was played at the APF’s Halchowk Stadium in Halchowk, Himalayan Sherpa defeated Saraswati 1-0 courtesy of a Bishwas Shrestha goal in the 30th minute.

KATHMANDU, Nov 24: CMG Sankata Club has continued its winning streak with a 2-0 win over Machhindra Club and has leveled... Read More...