KATHMANDU, Nov 24: CMG Sankata Club has continued its winning streak with a 2-0 win over Machhindra Club and has leveled points with leader Signature Manang Marshyangdi Club on Friday. This is Sankata’s third straight victory in the ongoing Martyr’s Memorial A-Division League in Halchowk, Kathmandu.

At the Halchowk Stadium, Sankata scored two goals in the second half through Nitin Thapa and Amit Tamang to keep its run going and also registered third straight clean-sheet becoming the only team to do so, so far in the league.

Sankata has registered nine points, but is behind Manang only on goal difference.

In other games played at the ANFA Complex in Satdobato, Lalitpur on the same day, Brigade Boys Club registered its first win of the tournament with a 3-1 comeback win over the 10-man departmental team Armed Police Force (APF) Club, while Tribhuvan Army Club moved on to seven points with a 1-0 win over Nepal Police Club in the first all-departmental clash of the season.

Brigade Boys went down in the 60th minute, and was on the verge of another defeat, but three goals in the space of 12 minutes helped the newcomer bag a superb 3-1 win.

The first half could not promise a lot in the match with little chances being created in the period.

Both the teams created enough chances to score, but could not convert them. APF got a free-kick in the fourth minute, but Roop Bahadur Lama fired over the bar, followed by his shot in the 15th minute from outside the box, which was saved by Brigade goalkeeper Sagar Raya.

Brigade got a chance in the seventh minute of the match when Kazeem Adegoke put a layoff to Jaya Gurung, but his shot was easily saved, followed by Tazudeen Aduknee’s header which was stopped by APF keeper Raju Yogi in the 12th minute.

The second half saw both the teams play with extra energy with the teams attacking from all areas of the pitch. APF started unlocking its opponent with superb one-twos and quick attacking movements, but failed to provide a threat in the final third.

Brigade was hitting APF on the break with the final third missing and the game being played less in the middle areas of the pitch.

Finally, APF scored the first goal of the match in exactly the hour mark as Lama’s curling shot from just outside the box wriggled past Raya after a mistake by the Brigade defense. Raya was criticized for his slow dive.

Then it was all Brigade in the match as it got a free-kick outside the box and Manoj Rai scored a thrilling free-kick 20 yards out of the box into the left corner in the 64th minute to equalize the match.

Brigade scored its second goal of the game five minutes later as the APF defense gave away the ball to Adukunee,

and he, unmarked completely, scored a goal to fire Brigade to a 2-1 lead.

Brigade kept on going for its third goal as substitute Kailash Basnet turned on the act with his long ball to Adegoke. The goal looked like a goal of the season contender as he hit a first time volley and the ball hit the right crossbar and went in.

APF kept on trying to at least pull a goal back, but an organized Brigade defense foiled their all attempts.

To further add APF’s misery, Bishwas Udas was shown a red card for his reckless kick on Basnet in the 89th minute.

Brigade head coach Urjan Shrestha seemed on cloud nine as he said that it was the best result of his coaching career and the credit goes to his players who gave it all for the win.

“It is the best result of my coaching career as it is the first victory for me in the A-Division League. I am very happy with the result and the performance. APF is a good team, and the game was 50-50. We conceded and we came back superbly to win. All the credit goes to the players,’’ Shrestha said. “I was a player once and I am not that old already. If a coach is active in the pitch, the players get motivated and will be active too.” He said correction of their mistakes of the last two games helped his team secure the first win.

APF head coach Rajendra Tamang blamed his players of having low knowledge of football and criticized them of throwing a lead against Brigade.

“These new players have less knowledge of football. They are not good individually. I teach them what needs to be done outside the ground, and they forget what to do when they are playing. Brigade’s players have good knowledge despite being U-18,’’ Tamang moaned. “In my career as a player with Manang, I used to command the team. We did not always have the good players, but secured good results as we played as a team. This team is not doing that. But, we will definitely make a comeback.’’

In the second game played in Satdobato, Army punished a sluggish Police team 1-0 to register its second straight win, after a 2-2 draw in the first outing.

Army was the better of the two sides as it piled pressure on the Police defense line and scored a crucial goal in the half hour mark.

Tanka Basnet crossed inside the box and captain Bharat Khawas could not prove his head to it. But, an overlapping Tek Bahadur Budathoki brilliantly put the ball into the back of the net to give Army a lead.

Army got other chances to score as well, but could not finish them.

A ball was crossed inside the box, but a head pingpong sent it to the path of Khawas, whose overhead kick went just wide in the 18th minute, followed by Budathoki’s shot after cutting past a defender went over the bar six minutes later.

Police also got some chances as captain Bikram Dhimal gave a long ball to Nir Kumar Rai, and his volley from inside the box went wide in the 38th minute.

Not much happened in the second half, but the notable ones were when Army’s Suman Aryal cleared a shot from the goal-line, while a last minute penalty appeal was not awarded to Police which could have changed the game’s scenario.

Suman Lama took a corner for Police and was headed by captain Dhimal, the ball was going inside the post, but a superb goal-line clearance in the 65th minute denied Police an equalizer.

In the last minute, substitute Bharat Shah moved inside the box for Police, and he claimed to have been pushed by an Army player. But referee Nabindra Maharjan wasn’t convinced.

Army head coach Nabin Neupane said, “Both the teams played attacking football in the first half. It was 50-50. I set my defense deep to protect our lead with counter attack strategy and it worked. Some tackles were not intentional, but the referee showed unnecessary cards.’’

Police head coach Ananta Thapa claimed that his team played for three points and not for a draw. “We wanted to maintain the gap between us and Manang. We had control in the game, we had possession,” he said. “We should have got the penalty, but the referees need to improve their decision making abilities. That was definitely a penalty.’’ 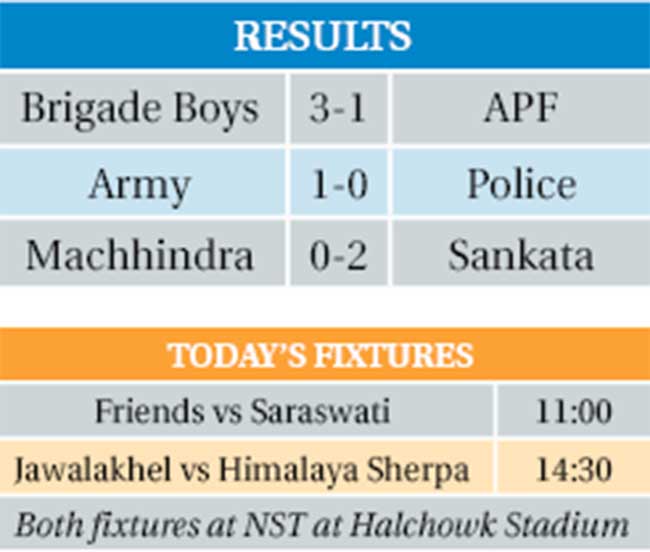