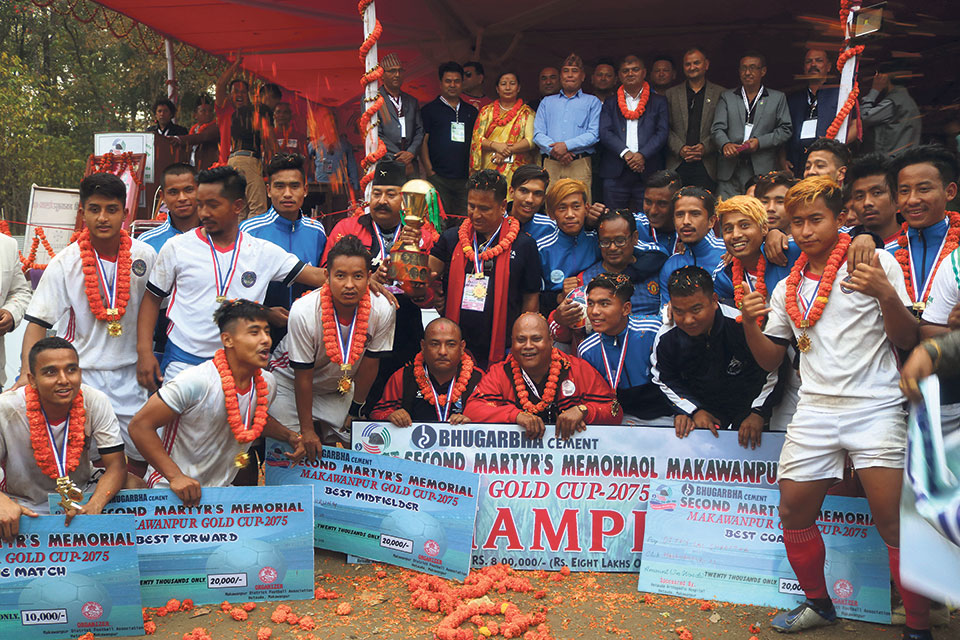 Members of Makwanpur XI pose for a group photo after winning the Makwanpur Gold Cup Football Tournament defeating Cameroon’s Dauphins Football Club in the final in Hetauda on Saturday.

With the title victory, Makwanpur has been rewarded with Rs 800,000, while the runner-up Dauphins collected a cash prize of Rs 400,000.

Dauphins took the lead first in the fifth minute of the game as Yannick Owana converted for the away side. But, Makwanpur only needed four minutes to equalize. Gurung got a chance from the penalty spot, while he scored the winner for the home team with another penalty goal in the 82nd minute.

Dauphins could not present its usual game which had been proved pivotal in its title winning campaign rampaging Nepali football giants, but Makwanpur presented solidity in defense and often threatened the Cameroonian side creating good chances.

Makwanpur captain and goalkeeper Ashok Baral became the best player of the tournament and was given Rs 75,000 and also was rewarded with the best goalkeeper and received Rs 20,000.

And, Oko Bota of Dauphins became the best defender of the tournament. They all were rewarded with a cash prize of Rs 20,000 each.

A total of 10 teams including Makwanpur, a foreign Dauphins and A-Division clubs took part in the tournament which started on March 21. Organizers said, a total of Rs 8.5 million was spent for the tournament.