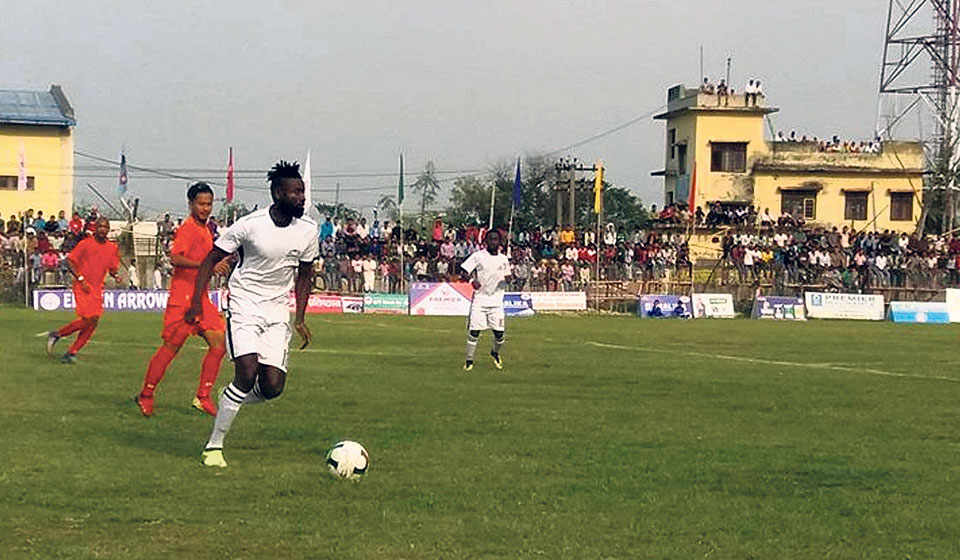 A player of Cameroon’s Dauphins Club in action against India’s Royal Club West Bangal during a quarterfinal match of the 3rd Manmohan Duhabi Gold Cup football tournament in Sunsari on Tuesday. Photo: Republica

Dauphins performed consistently well in both halves. Strikes from Yannick Owana in the fourth minute and Mesokou in the 36th minute helped the Cameroonians take the lead at the end of the first half against Bengal’s Benito strike in the 26th minute.

Likewise, Dauphins held onto its lead in the second half scoring its third goal in the 58th minute converted by Kono. Similarly, Siligudhi’s Kriss scored in the 63rd minute to reduce the margin of defeat as Dauphins secured the win to reach the semis.

Mesokou was adjudged player of the match and received Rs 10,000. A regular participant in Nepal’s domestic leagues, Dauphins will face Mechi Netralaya Kakarbhitta Football Training Center of Jhapa in the semifinal match on Thursday. Kakarbhitta had won with a staggering 4-0 scoreline against A-Division League outfit and departmental team Nepal Police Club on Sunday.

The winner and runner-up of the Duhabi Gold Cup football tournament will bag a purse of Rs 600,000 and Rs 300,000 respectively. The football event is organized by Manmohan Memorial Trust in partnership with home team Eleven Arrows Club.