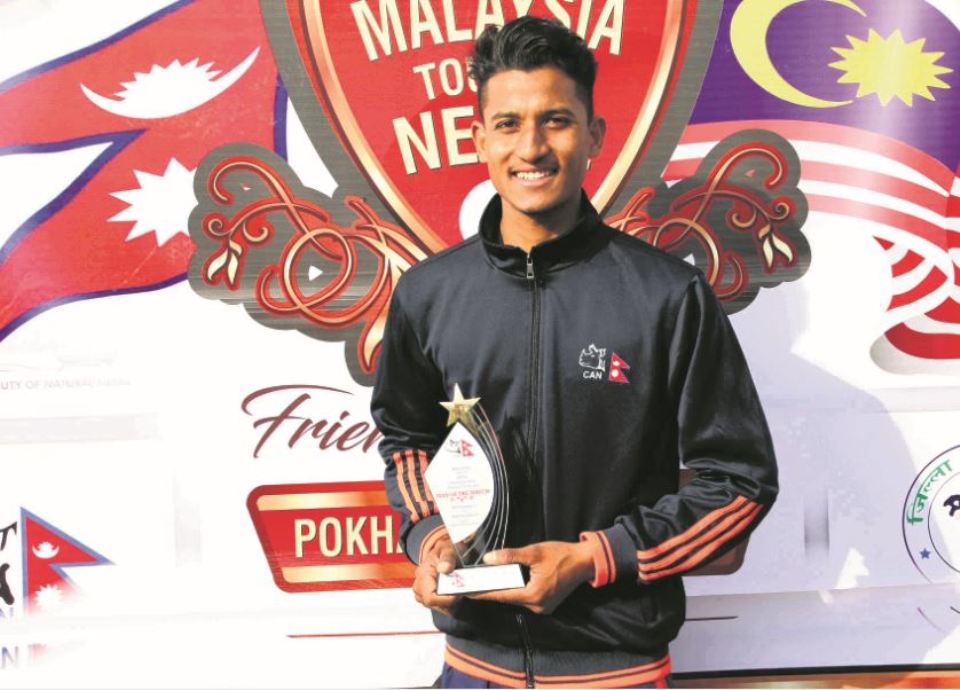 CAN XI posted a total of 290 runs in allocated 50 overs for the loss of eight wickets whereas Malaysia XI were bundled out for 118 in 28.4 overs to secure the second win in two matches. Malaysian cricket board agreed to feature in three-match practice match series against the host nation in the closed camp of Nepal national cricket team held at Pokhara.

In a bid to give opportunities to new players, Kishore Mahato scalped three wickets for 19 runs in his 7.3 overs in the match to give Nepal early advantage during the defense. Mahato was adjudged player-of-the-match for his performance with the new ball. He dismissed number three batsman Sharvin Muniandy for a run whereas opening batsman Bhusan Vilas Save for 24 runs. He also dismissed Pavandeep Singh for five runs to seal the win.

Mahato was aided by Lalit Rajbanshi’s three wickets whereas Sushan Bhari, Kamal Singh Airee and Pawan Sarraf chipped in with two and a wicket each during the innings. Syed Aziz for Malaysia top-scored with 32-ball 28 runs which included a boundary before being dismissed clean-bowled by Sarraf. Similarly, Virandeep Singh scored 23 runs scoring four boundaries during his 21-ball stay.

Earlier, CAN XI won the toss and elected to bat first. Two Nepali batsmen notched up half-centuries before retiring out to allow other batters get some time in the middle. Captain Gyanendra Malla smashed five boundaries and two sixes during his 47-ball 54 runs whereas middle-order batsman Rohit Kumar Paudel faced 54 deliveries to score 57 runs which included four boundaries and two sixes. Similarly, opening batsman Subash Khakurel missed his milestone by two runs scoring 48 runs off 77 deliveries which included four boundaries.

Youngster Lokesh Bam smashed a quick-fire 28-ball 34 runs which included four boundaries and two sixes whereas Sunil Dhamala and Binod Bhandari contributed 24 and 21 runs in 33 and 21 deliveries respectively to help Nepal post 290 runs for the loss of eight wickets in 50 overs.

Malaysia XI’s Nazril and Anwar Rahman shared two wickets each whereas Mohammad Aarif and Muniandy chipped in with a wicket each. The visiting team conceded 19 runs in wide deliveries during the innings.

The Malaysian cricket team is touring Nepal under its cricket board’s development program. The team participated in the Manmohan Memorial National One-day Cricket Tournament held in Inaruwa before traveling to Pokhara to participate in Nepal’s closed camp.

Nepal is preparing for the upcoming home leg of ICC World Cup Cricket League 2 from February 5-12. The home team will host the United States and Oman in an ODI tri-series.