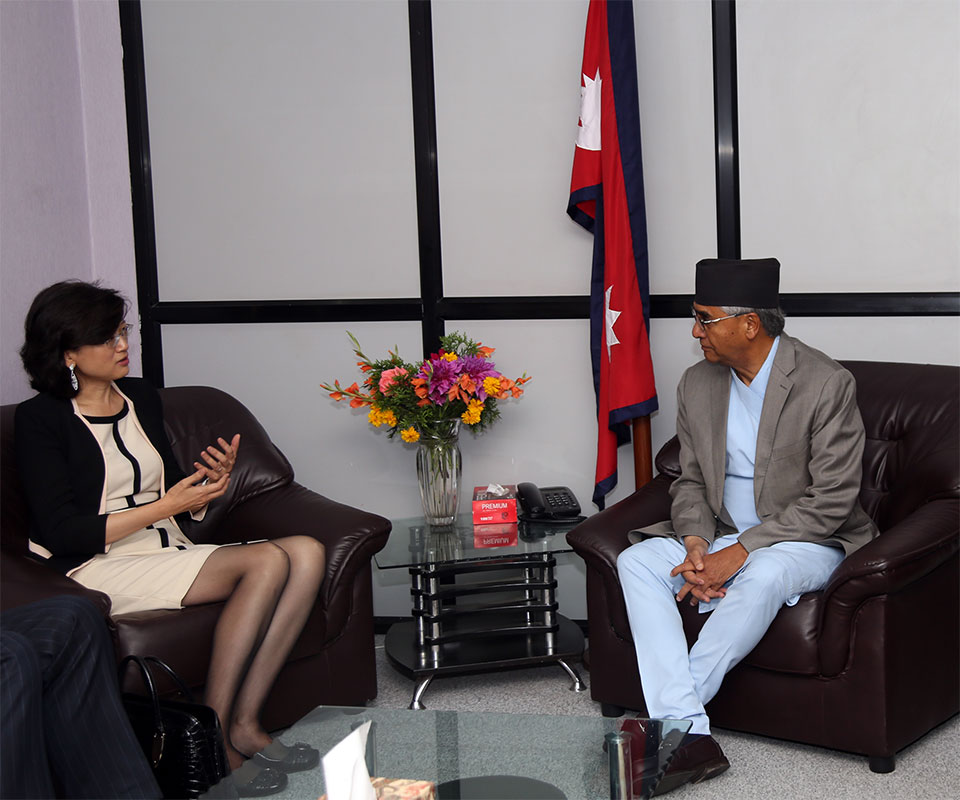 Nepali Congress President Deuba knows better than anyone else that China these days does not have to pick favorites among the Nepali political actors.

A frenzy of speculation has greeted the new grand alliance of three left parties. Most of those convinced of ‘foreign meddling’ espy China’s clumsy hand. Others, curiously, think it is the doing of the often meddlesome southern neighbor: India supposedly knows which side of the Nepali bread is buttered. But is there any substance to these doubts?
India first. Far from bringing together communist forces in Nepal, the Indian establishment and its intellectual class seem shocked at the sudden turn of events in Kathmandu. Scrambling for a coherent response, Prime Minister Narendra Modi cancelled his impending Nepal visit.

One conspiracy theory has it that India tied the knot between CPN-UML and CPN (Maoist Center) with Baburam Bhattarai, New Delhi’s old friend, playing the matchmaker. The new left force including Bhattarai will supposedly allow India to ‘neutralize’ the threat from ‘pro-China’ Oli. But it would be stretching credulity to believe that Modi government, which spent considerable political capital in putting together Nepali Congress-Maoist coalition, would now, and without a good reason, pull the rug from under Sher Bahadur Deuba’s feet—right before Modi’s scheduled Nepal visit.

But what about China? Nepali Congress leadership for one seems convinced that the abrupt left turn of Nepali politics would not have been impossible without China’s support. Their fear is amply echoed in New Delhi. There is reason for India to worry, declared a recent (Oct 6) Indian Express editorial, “as Chinese influence is suspected to have propelled the various communist factions towards each other”. Ominously titled “Red card in Nepal”, the editorial then noted that “the dominant party in the alliance, Oli’s CPN-UML, is perceived to be close to Beijing”.

Congress President Deuba knows better than anyone else that China these days does not have to pick favorites among Nepali political actors. Following the 2015-16 border blockade, which brought home Nepal’s desperate need to diversify its trade beyond India, the constituency in Nepali Congress that is sympathetic to China has steadily grown. China understands this, which is why Chinese Ambassador to Nepal Yu Hong has been at such pains to convince Congress leadership that China had no active hand in the recent turn of events.

It is true that China has over the years advised the left political forces in Nepal to work together. But this has always been a gentle suggestion, from one communist force to another, than a diktat. It would be foolhardy of China to needlessly antagonize the oldest and most well-established political party in Nepal, which, in any case, is increasingly accommodating Beijing’s concerns.

The Chinese have also seen how such unwanted intervention has repeatedly singed India’s hands. So there is little substance to the allegation that China was instrumental in bringing about the left coalition.

Domestic political rationales are compelling enough. KP Sharma Oli wants to be the prime minister again, a dream which would be fulfilled only with an absolute majority in the upcoming federal elections. But such a majority would have been impossible with CPN (Maoist Center) eating into UML votes. Now, with the consolidation of the left vote, Oli’s chances are much brighter.

For Pushpa Kamal Dahal, the lure was getting to be the undisputed communist leader of Nepal, his old dream come true. In return for a promise to make Oli prime minister again, Dahal has secured for himself chairmanship of the future combined left outfit.

As for Baburam Bhattarai, who was becoming increasingly irrelevant, the alliance was a chance for a phoenix-like revival in Nepali politics. Bhattarai desperately needed Messrs Oli and Dahal to revive his political career. But why did they need Bhattarai? I believe this has to do with India.

Dahal and Oli are both viewed as close to China, at least when seen through the old Indian lens. Life would have been difficult for the new left outfit if New Delhi thought had come into being solely to do Beijing’s bidding. They thus decided to enlist the services of Bhattarai, reportedly after the Naya Shakti coordinator offered to play such a mediatory role. He is now expected to bat away lingering Indian doubts vis-à-vis China.

Nepal’s foreign friends should also have few doubts about the new ‘communist alliance’ because the parties represented therein are, strictly speaking, not even communists: the mother Maoist party has long since abandoned its radical ‘state capture’ agenda and UML, with its vast business network, is these days more capitalist than even pro-market Congress.

The new left alliance has spawned uncertainty. But it also offers hope. If it gets a majority, and the three parties subsequently unite, Nepal could finally have a government that lasts for full five years, thereby heralding a new era of political stability.

But there are already signs that India is unhappy with the left unity and is looking to undo it. Indian journalist Anand Swaroop Verma recently hinted of this in his Oct. 9 article in Kantipur. Indian external ministry officials and RAW operatives, he suggested, were trooping to the Indian Embassy in Kathmandu en masse to stop the left parties “at any cost”. If true, this would be another big blunder on India’s part, after the blockade.

There is no substantive evidence that China pushed for the new left alliance. But even if it did, India has little to fear. China cannot, even under the best of circumstances, match India’s extensive influence in Nepal that is based on solid geographical imperatives. This is why for any government in Nepal, be it under Congress or UML, it has everything to lose and nothing to gain by working against Indian interest.

Time has also come for India to shed its old insecurities and be more comfortable in its role as the largest democracy in the world—with all its attendant benefits. The allure of Indian soft power, for instance manifest in Bollywood and IPL, both wildly popular in Nepal, is already strong. Nepal’s democratic journey, in many ways, follows the script of India’s own democratic experiments after 1947.

If only New Delhi could abandon its colonial mindset while dealing with small powers in the region, and be more accepting of their independent status, India wouldn’t ever have to worry about China or the US or any other power making mischief here.

Nepal exported electricity worth Rs 1.72 billion to India in June, average price per unit stood at Rs 9.67
4 hours ago

President Bhandari emphasizes on role of law education for promotion of rule of law
36 minutes ago
Rs 10,000 fine slapped on Rajpur's mayor for not providing information
51 minutes ago