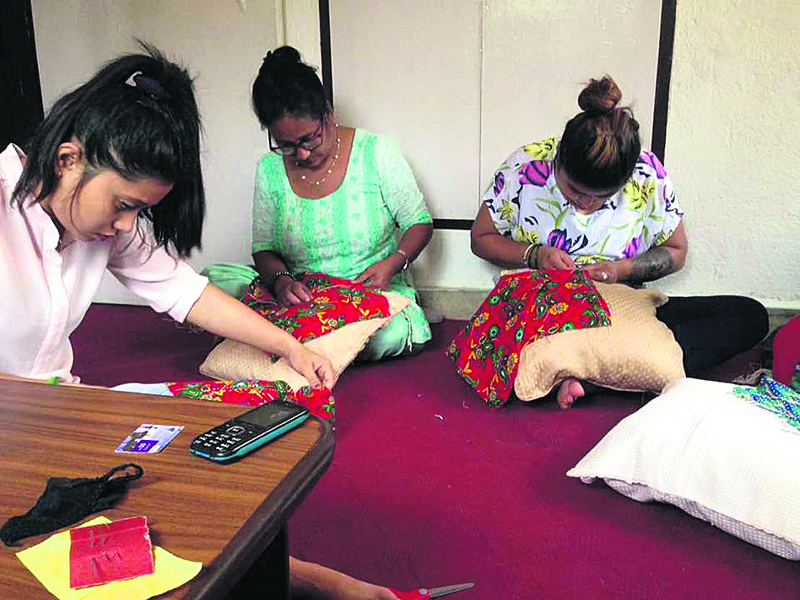 Muskan
Most of us in the country look forward to going abroad, even if it is just to India, for the shopping experience it provides. But there are some local companies that might just make you rethink that next shopping trip. These places offer good products at affordable prices and even the quality will take you by surprise. But running a business in Nepal is far from easy. Here, the founders/owners of three such wonderful companies join us to talk about their journeys and the challenges they have had to face (and embrace) along the way.

Muskan was the brainchild of Anisha Shakya, Sneha Shrestha, and Upendra Singh for a project while they were doing their masters in Development Studies at Kathmandu University. They saw a lot of plastic sacks around the valley and wanted to repurpose them into bags. They had made a few samples, but hadn’t thought about turning the idea into a business until the earthquake struck. After the quake, they started business informally, only focusing on the sack-bags. They finally registered their business in 2016 and there’s been no looking back since then.

“The reason behind starting the business was that a lot of people lost their jobs and didn’t have a way to sustain themselves. We thought we could help create opportunities for them,” says Anisha.

They now have 14 women working for them from in and around Kathmandu. Anisha’s sister, Ursha Shakya, had interned for HimRights and had conducted a survey in Binche during her masters. In the survey, they found that there were a lot of women in this area who were willing to work but didn’t have the skills or platform to do anything. There were also women who had been trained in a lot of things like candle making and handicrafts but could only share their products with their friends and families. They were excited about finally being able to get their products out there.

The team first trained 30 people, most of whom were older than them and all of them were housewives. At first they seemed enthusiastic but balancing children, chores, and work became a struggle and slowly most dropped out. “There are only five women that remain from this original team and our team now consists of their relatives or friends who heard about us and wanted to work as well,” says Anisha. These are people who make the wall hangings, earrings, jute bags, as well as side bags and small purses. One of their best selling items is a bag with a running stitch on it. It is also the product that takes the longest to make. It’s simple, but everyone seems to love it.

One of the biggest challenges they are currently facing is the fact that women don’t really take it as serious work and only work when they are free. Production isn’t their foremost priority. There are only three women who work full time and finish their work by the set deadline. “These three people have more assignments than others because we know we can trust them to deliver on time,” says Anisha.

“We haven’t been able to pay people on salary basis, so we pay them for every piece of work they finish. And they are satisfied with their earnings,” says Ursha.

However, one of their best workers wants to leave for the gulf country because the money is better there. But she also says that if there is a guarantee of continuous work, she might drop the idea.

“The hardest thing is that we train people and they don’t stay. They drop out, and it’s our time and energy that has gone to waste. Then we have to look for new people and train them again. It’s a never ending loop,” says Anisha.

Logo fashion industries
Logo fashion industries is a joint venture company that was established in Nepal in 1997. Co-founder Hira Muktan has been in the garments industry for the past 25 years. The head office of the industry is in Dubai and they had a branch in North Cyprus before they decided to open a factory in Nepal.

The industry exports their clothes to private companies, most of which are located in Europe. 90 percent of their clothes go to Germany and the other 10 go to countries like UK, France, Italy, Austria, and Slovenia. Although they say they aren’t a very big company, they are surviving because they provide a one-stop solution for their clients.

They have designers in Germany who work tirelessly with young designers in Nepal to create dresses and garments that are in vogue. The clothes go through rigorous checking before they are exported or sold in their four factory outlets in the valley. These outlets are situated in Jhamsikhel, Sankhamul, Bhaktapur, right next to their factory, and Le Sherpa.

They have fabric suppliers all over the world, China being one of the major ones. “You really realize what having a sea port means to the development of a nation,” says Muktan as he compared the situation in Dubai and Nepal. The money that is spent in transporting tons of fabric through ship is a lot lesser than the money spent on small amounts of fabric by air.

When they first opened, he recalls, the other companies used to say that they were spoiling the workers by over paying them, when they paid their workers just Rs 7000 every month. Labor was cheap here and they were making a difference in the lives of a lot of people. “We even bought more land, hoping to expand and create labor camps on site so that they wouldn’t have to travel far to work,” says Muktan. But they had to shut down in 2002 due to the political unrest in the country. The Maoists and the Army made it impossible to run the factory so they stopped production here and moved back to Dubai. After 13 years of being shut down, they have only just reopened the factory here and started production.

“We realized straight away that things were nothing like how we left it 13 years ago,” he says. But there are still problems. There is not enough workforce in the country to sustain industries. People have gone abroad, especially to gulf countries, to work. “I don’t think anyone has thought about how the country will sustain these people, returning from the gulf, no longer able to work,” says Muktan.

With his factories and the boom in startups, he hopes that people will stay back and work in the country. “One of the most disheartening things is that we train people for months, finally get them to produce the quality of clothes we are looking for, and they come with a visa and tell us they are leaving,” he says.

The consumers in Nepal are generally uninformed about the products they buy. They spend hours looking for good makeup because they have to apply it on their skin, but they don’t have the same standards for clothes. “They forget that it’s a second skin that comes in contact with their skin all day long,” says Muktan.

He recalls people picking up things they liked, and then making a face before putting the product down and moving away because it said ‘Made in Nepal’. He also recalls seeing other factories labeling their products that were made in Nepal with the tag ‘Made in Vietnam’ and such. He believes lack of pride and trust in local products will continue to cause a lot of setbacks for people trying to do something for the country and its people.

Cotton Mill
The idea for Cotton Mill was not something sisters Priyanka and Prasanna Basnet stumbled upon one day. All they knew was that they didn’t want to work under anyone anymore. They tried a lot of other things, like a coffee plantation, before they finally knew what they wanted to do. Even then the idea hadn’t taken shape completely.

“Apartment culture was just coming up in Kathmandu at that time, and since we couldn’t invest in those, we decided to invest in trying to beautify the apartments instead,” says Priyanka. They went to China where they bought a lot of products they could sell and took part in an exhibition when they came back home. Almost everything they bought had sold out, but they realized that people didn’t think much of Chinese products. So they slowly started to see if they could locally source products and make things themselves. It would also be a lot more cost effective than importing goods all the time and they could guarantee the quality to their customers as well and things picked up in 2010.
“Looking back, it did take a lot of changing directions to get here,” she says.

When they first started out, getting information on the sector, and knowing the market for the products were the hardest things they had to do. They didn’t know where to go and how to deal with people.

Priyanka had studied international business but everything she had learned was completely irrelevant to what she had to face every day. They had to mostly rely on information they found online.

“When we started out we had a lot of male staff working at the factories. But we found that the ones we had to deal with were very unreliable,” she says. Some of the work staff would walk away from work before the end of the day and others would take a spontaneous week off, and wouldn’t even bother showing up, even after the week was over. When things started getting out of hand like this, they had to shut the production down for about three months before starting again, this time with an all female staff. “We aren’t very vocal about our almost all female staff. We weren’t aiming for women empowerment, it just happened that way because being women, we found, it was easier to work with other women,” she explains. Their factory opens at 10 am and closes at 6 pm so that these women have plenty of time to juggle between household chores and work.

All of their products have a white base and the reason behind it is two folds. Everything in the valley is so heavy and oppressive that they wanted to give people a reason and a way to feel a little light.  The other reason is that dye-jobs in Nepal haven’t really evolved and dyeing fabric is too expensive and often a poorly done job. They haven’t focused on exporting just yet as their production size is too small to handle large shipments. The only ‘exporting’ they do when people order their products to take them abroad. But they are looking forward to opening more factories and retail outlets in and outside the valley, and eventually start exporting as well.