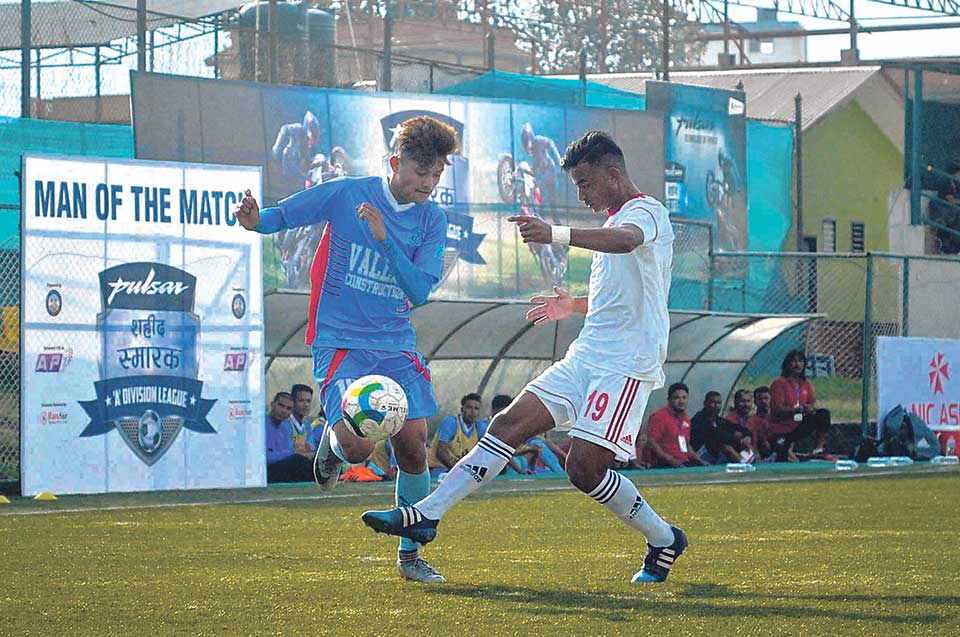 KATHMANDU, Oct 11: Machhindra Football Club and Chyasal Youth Club played the first goalless draw of this season’s Martyr’s Memorial A-Division League in the match which saw both the teams failed to convert their chances on Wednesday.

In the third league match of the season played at the All Nepal Football Association (ANFA) Complex in Satdobato, Lalitpur, the highlight of the match was when Chyasal midfielder Hemanta Thapa Magar saw his penalty saved and both the teams wasted a couple of good chances.

Of the two sides, Chyasal looked better with its attacking football focusing both on the flanks and the middle area of the pitch, while Machhindra played a brilliant defensive game to deny national team striker Bimal Gharti Magar and the team.

Earlier in the game, it was Machhindra that played passing football with focus on the center of the pitch, but was poor in the final third with no good balls from the midfield to feed the attackers to score. Meanwhile, Chyasal played good attacking football building the play from the back, but the combination of its midfield and attack was very poor.

Chyasal got the first chance of the game through Bishow Adhikari, who hit a shot from inside the box, but was blocked by Machhindra’s Bibek Pandit and went out for the corner. The corner was a good looking one, but striker Gharti Magar headed the ball just wide in the seventh minute of the match.

Machhindra then looked a bit sluggish in the back as it failed to clear the long balls put in the box by Chyasal wingers, and it was a poor defensive combination which saw the team struggle to get the ball forward, or even into the midfield.

Machhindra then started to create attacking chances in the other end as Ajit Gurung’s shot from outside the box was saved by Chyasal keeper Dinesh Thapa Magar in the 13th minute.

Chyasal got a chance just two minutes after that as Tshiring Gurung fed the ball to Santa Bahadur Magar, but the Machhindra defense cleared the ball brilliantly in the 15th minute.

It was chance after chance for either team as Machhindra’s Bishal Rai’s shot from the edge of the box went wide in the 18th minute, while Ajit’s corner in the 21st minute looking for Bikash Rai went over the bar.

Chyasal looked a bit slow in the midfield area and could not create many chances for a long period of time. But, a shot from the edge of the box from Ajit went wide of the frame of the goal in the 31st minute. It got another chance quickly in the 34th minute, but Ajit’s shot from outside the box was saved by Machhindra keeper Deep Karki.

In the 45th minute, Chyasal got one last opportunity to score in the first half as Hemanta hit a free-kick looking for his captain Devendra Tamang, but it went just wide.

Come the second period, both the teams looked lively putting in more efforts in comparison to the first half. But none of the sides score any goals in the game.

Hemanta put a long ball looking out for Sajin Thapa Magar in the first minute of the second half, and he passed the ball to Santa. Santa looked destined to score as he got past couple of defenders on his way, but his weak shot was saved by the keeper.

Bimal was in the thick of things as Chyasal came very close to scoring, but his free-kick from just outside the box hit the left top crossbar in the 53rd minute.

Machhindra got a wonderful opportunity in the other end as Khamir Glison Kandang dribbled past the entire Chyasal defense, went to the byline, got near the box, but his low cross was dealt with and cleared by the defenders in the 58th minute.

It was all Chyasal until the hour mark as Amir Shrestha put a cross to Santa, but his shot was blocked and the follow-up was hit wide by Sajin in the 65th minute.

Machhindra got another chance just a minute later, but Ajit’s shot from outside the box was saved. Chyasal keeper Dinesh passed the ball quickly to Shrestha who was clean through with just two defenders to beat and he passed Bimal, who cut the ball and got inside the box and was fouled by Anjan Devkota.

The referee Shrawan Lama showed no hesitation to point his finger toward the spot, but Hemanta’s penalty toward the right bottom corner in the 75th minute was saved brilliantly by the keeper. The rebound hit by Bimal went wide.

Hemanta looked a bit down on confidence after missing the vital penalty as he could not play his normal game and gave many miss passes after that. Hemanta’s shot from outside the box went just wide in the 77th minute.

Machhindra looked really slow when it got a chance through counter attacks as Chyasal put most of the players forward in attack. Chyasal could not provide a telling ball in the box for its attackers to score.

Chyasal head coach Raju Kaji Shakya said that even though his side came for a win and that his side played well, he blamed his players for lethargic display.

“It was a good performance considering it was our first match of the season. We came for a win, but the players took it lightly that proved costly. The attacking movements were not good,’’ Shakya said. “Bimal had just arrived yesterday from Bangladesh for training after the Bangabandhu Gold Cup and so it was difficult for him.’’

Meanwhile, Machhindra head coach Dhaneshwar Prajapati said that he was satisfied with the team performance.

“Our main strength is defense and we did that superbly. It was a good performance, we had possession and we focused on counter attacks as well,’’ Prajapati claimed. “This is a great experience for me as a coach since it is my debut in the league.’’