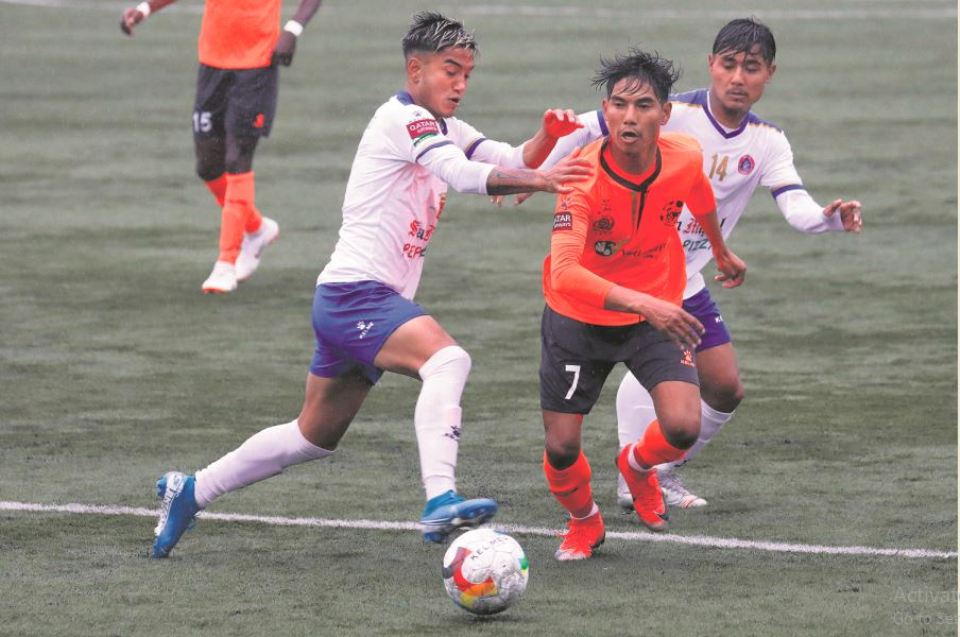 With Army already on top on goal difference with same points (13), Manang, who remains the only unbeaten team in the league, on third with a point adrift of Machhindra and Three Star with 10 points on third can all take advantage of the Machhindra loss and will most likely see a big turnaround in the league this round. But, with Three Star to take on Manang on Saturday, one of them will be at a disadvantage.

The game was scheduled to be played at the Dasharath Stadium in Tripureshwar, but was switched to the All Nepal Football Association (ANFA) Complex in Lalitpur due to heavy rain.

It was the first time Machhindra failed to score a single goal this season.  Himalayan Sherpa went ahead in the first minute of the match as an own goal from center back Peter Segun became the fastest goal of the current season.

It was the first win of the season for Himalayan Sherpa Club, who had drawn four matches prior to the match, and a boost of confidence was imminent with the club adding the second inside the 20 minutes.  Machhindra dominated the possession in the game, but it was Himalayan Sherpa, who looked more clinical with more shots on target.

After the goal, Machhindra turned its attacking gear on with constant attacks through the flanks. It got a couple of chances from free-kicks, but could not convert any of them early on.

Himalayan Sherpa looked positive in the game as it did not allowed any defensive lapses and prioritized long balls to threaten the Machhindra’s block of three defensive players in Segun, captain Biraj Maharjan and former Three Star fullback Ranjit Dhimal.

The tactics of playing a midfield block of three and the forward line of four consisting of Sujal Shrestha, Abhishek Rijal, Rejin Subba and Somide Oluwawunmi could not work as the midfield three could not get the balls firmly on their tracks and gave away a lot of possession.

Himalayan Sherpa did not fret over taking the chances and hitting Machhindra on the counter attack.  Midfielder turned forward, Sujal got a chance to score in the 16th minute as his shot from just outside the danger box was saved by Himalayan Sherpa keeper Kishor Giri. The rebound chance fell to Rijal, but he was caught offside.

The miss proved to be costly as Himalayan Sherpa scored its second goal four minutes later. Bijay Shrestha doubled the team’s advantage as he headed in a free-kick from Niraj Basnet in the 20th minute.  Himalayan Sherpa got chances after that as a shot from Ulrich Siwe was saved by Machhindra keeper Bishal Shrestha in the 24th minute, while a shot from  Tridev Gurung was blocked by the Machhindra defenders. Kamal Thapa got a chance from rebound, but his effort went over the bar.

Subba had a chance to get a goal for Machhindra, but a shot from outside the box went over the bar in the 35th minute.

Dhimal played a decisive role for Machhindra with staying in defense to coordinate with both Segun and Maharjan and also made forward runs. But, that led to Himalayan Sherpa having to beat only two defenders, one of whom being a fullback Maharjan. Dhimal got a few good crosses inside the box, but Himalayan Sherpa defenders were aware of the threat and made good clearances to keep the clean sheet.

Sujal had another chance to score, but his left footed shot from the edge of the box grazed over the crossbar in the second minute of the first half injury time. There were a few good chances for Machhindra in the start of the second half, but some were saved by the goalkeeper, while the other could not be converted.  Hamal looked like scoring the third for Himalayan Sherpa in the 52nd minute, but his shot was saved by Machhindra keeper Shrestha. Two minutes later, he got another chances, but it was saved again. Himalayan Sherpa looked authoritative with its chances creation in the game, but failed to add on to its tally. Siwe put on a good cross inside the box, but a header from Tridev Gurung was saved by Shrestha in the 66th minute.

Rijal had a chance to convert a good chance, but his shot was saved by Himalayan Sherpa keeper Giri. Giri was up for another save as a rebound shot from Subba was sent for a corner with a brilliant save yet again in the 67th minute.

Machhindra got chances after chances in the last 15 minutes of the match, but the lack of clinical finishing saw the team lose its first game of the season.

With the win, Himalayan Sherpa has taken a leap from the 13th place to the 10th with seven points from as many games. It has won a game, drawn four and lost twice this season.  Meanwhile, Machhindra has accumulated 13 points with four wins, two draws and a loss. It has dropped to the second place with Army going top on goal difference.

Nagma-Gamadhi road to be upgraded
2 minutes ago