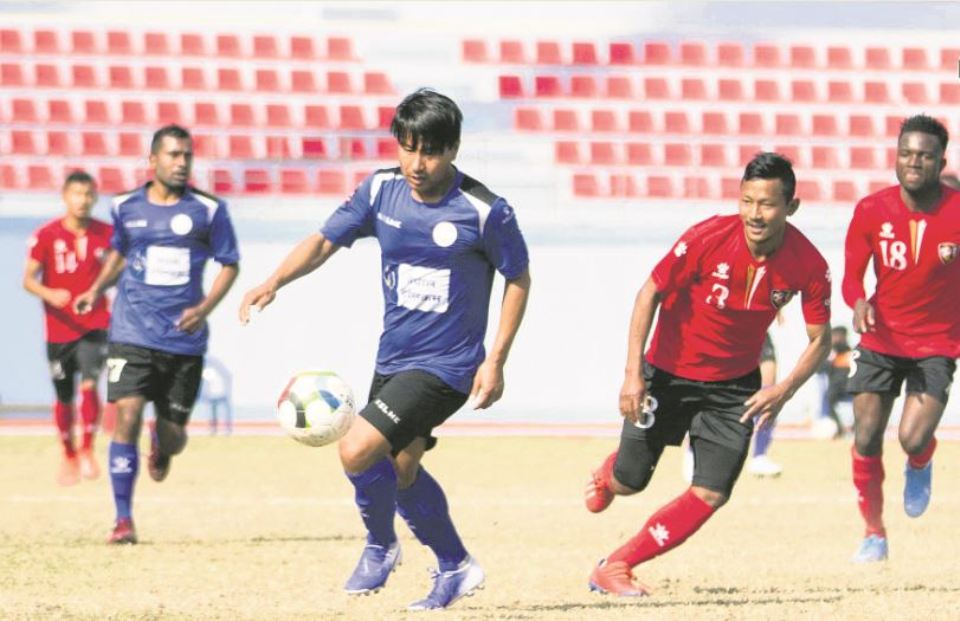 In the first match held at the Dasarath Stadium, NRT's only goal from midfielder Darshan Gurung was enough to earn all three points.

The first chance of the game came to Police in the second minute when Prabin Kumar hit a shot from outside the box which went off target.

In the seventh minute NRT had a chance to take the early lead but the shot from Prakash Budathoki was saved by Police's goal keeper Shatrudhan Kumar Chaudhary.

Police had a chance to score in the 12th minute, however, it did not trouble NRT's goalie. Again in the 20th minute, Police's Bharat Shah provided an excellent ball to Tej Tamang but a poor first touch squandered the goal-scoring chance.

The first substitution took place in the 25th minute when Anjan Rai replaced an injured Rabin Shrestha for Police.

Again in the 30th minute, NRT's Nikengue's pass created a trouble for Police's sloppy defense, but nevertheless they managed to clear the tricky pass.

The first yellow card of the game was handed to Man Bahadur Pariyar of NPC after he committed a bad tackle on Ndemba. Another Police player was booked just before half-time after Nir Kumar Rai made an offensive tackle on NRT's Bikram Dhimal.

The second half began with Police replacing Shah with Bhola Nath Silwal.

The first chance of the half came for NRT in the 49th minute with a corner. NRT's Arik Bista headed the ball towards the goal but Police's defender made a goal line clearance to send the ball out for another corner.

NRT had a chance again in the 55th minute but the shot went off target. The second half was dominated by New Road Team despite Police having most of the possession.

In the 64th minute, both of the teams made substitution as Rajesh Pariyar replaced Ashok Thapa for NRT while Jumanu Rai replaced Nir Kumar Rai for Police.

The first chance for Police in the second half came in the 65th minute. Substitute Jumanu Rai had attempted a shot out of a box but ball came straight to the keeper. NRT tried to punish Police in the counter but the ball was eventually saved by the Police goalie.

The deadlock was broken in the 76th minute as Darshan Gurung scored a tap-in from the center of the box after a magnificent pass by Rajesh Pariyar.

After the goal, NRT was all over the place. In the 79th minute, Police keeper saved Pariyar's shot from inside a box to deny NRT. NRT again had a good chance in the 86th minute but was again stopped by Police's keeper.

Police had a late chance to equalize but could not score as the NRT goal keeper made a stunning save. This was the final attempt for Police as NRT handed Police its second loss of the season.

The player-of-the-match was awarded to Arik Bista after his stunning performance for NRT.

NRT, starting with two points deducted from last season, is now level on points with Police but its better goal difference places it above the departmental team. It now has eight points with three wins two draws and a loss this season. It currently is five points behind the leader Machhindra. The win would have left Police go up to fourth, but the team couldn't capitalize this chance. It now sits at seventh.

In the other game held in Dasarath Stadium, Chyasal Youth Club faced Armed Police Club. However, the game could not produce a goal ending on 0-0 stalemate. Both the teams shared a point each.

Chyasal is now sitting 10th with six points with five points off relegation. Armed Police are a place below Chyasal Youth in 11th with level on points with Friends club.

First governor of NRB passes away
10 hours ago