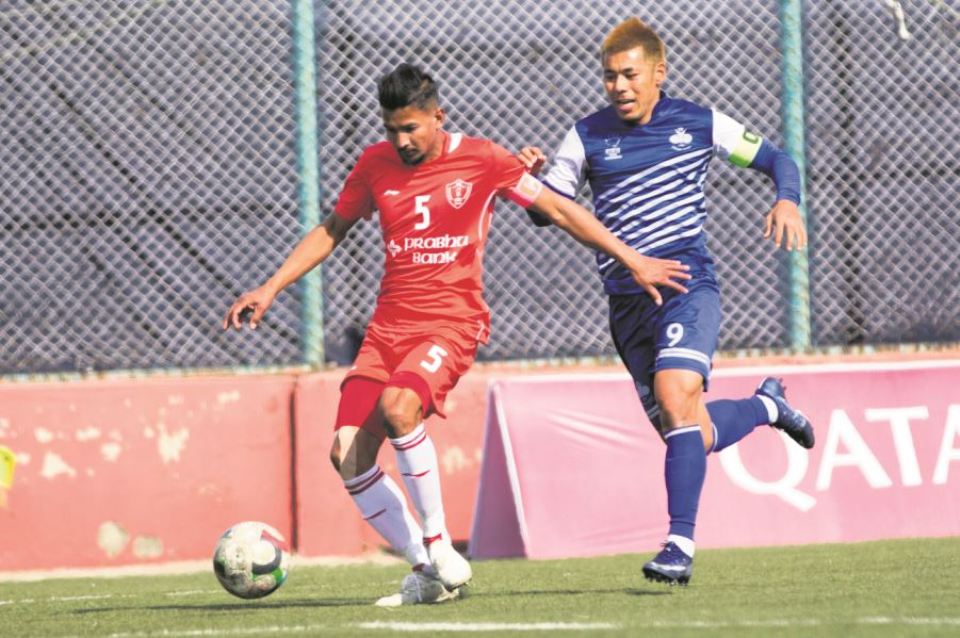 KATHMANDU, Jan 1: Chyasal Youth Club has lost two matches in a row despite presenting a strong challenge in the  first two matches of the Qatar Airways Martyr's Memorial ‘A’ Division League as it suffered a 2-0 defeat at the hands of Jawalakhel Youth Club in Lalitpur on Tuesday.

In the game played later on the same day, Brigade Boys Club defeated Himalayan Sherpa Club 1-0 to register its second win of the season on the occasion of the club’s 100th game in the top tier Nepali league.

In the first game held at the All Nepal Football Association (ANFA) Complex in Satdobato, Jawalakhel got better of Chyasal Youth Club with two goals within the space of two minutes in the last 10 minutes of the match, while Bijay Gurung scored the only goal to hand Brigade a win over Himalyan Sherpa later on the day.

Midfielder Rup Bhadur Lama opened the scoring for Jawalakhel late on in the 81st minute, while substitute Bijaya Ghalan doubled Jawalakhel’s advantage and sealed the win in the 83rd minute.

The first half ended on stalemate with both the sides wasting a series of chances.

Both the teams started the game on attacking mode as they both got the chances early on in the game, but a poor finishing from the forwards saw the game failing to produce a goal in the first half.

Fode Fofana was put clean through with a good midfield pass, but Chyasal goalkeeper Alan Neupane came forward to grab the ball in the 14th minute and was successful.

Jawalakhel got an opportunity to score the first goal in the 20th minute, but a long range shot from Nir Bahadur Ale was off target.

Chyasal forward Santosh Shahukhala, who has scored 99 league goals in his career, was again short of finishing as he failed to score a goal in the last two matches, despite scoring three goals in the first two this season.

Chyasal’s Tshring Gurung got a chance in the 33rd minute as he couldn't convert a free-kick pass from Sunil Bal.

Shahukhala got a real opening four minutes to half time, but his shot from inside the box was off target.

The first half was pretty much the same as Jawalakhel switched its tactics to attacking and Chyasal stayed back with counter attacking football. But, Chyasal could not hit Jawalakhel on the break.

Jawalakhel finally scored in the 81st minute as Lama

scored a screamer from 18 yards out to break the deadlock in the second-half.

Substitute Ghalan, who was brought in the 75th minute in place of Aruj Singh, scored in the 83rd minute to snatch all three points from the game.

After the win, unbeaten Jawalakhel has climbed up to the third place behind only holder Manang Marshyangdi Club and Machhindra Club. It has accumulated eight points from four games with two wins and two draws. Likewise, Chyasal, with a win and a draw, is in the ninth place with four points.

After the victory, Jawalakhel head coach Naresh Thapa hailed the team mentality. "The three points are very beneficial for us. We played against a strong side and we played well against it. We played with high pressing and did very well. The team will improve as the time progresses."

Chyasal's coach Bal Gopal criticized his side’s poor performance adding they could not cope with the opponent’s pressing. "Jawalakhel pressurized us in all parts of the game and we couldn't cope with it. There are some question marks in the defense. The attitude from the players was poor today."

In the other match, Himalayan Sherpa conceded its second straight loss of the tournament as it went down to a first half goal from Bijay to lose 1-0.

Brigade Boys scored an early goal through Bijay Gurung in the 17th minute as he scored from inside the box into the bottom corner.

The goal was enough to hand Brigade all three points. Himalayan Sherpa was further outdone and was put into the sword with a 93rd minute second yellow card to finish the game with 10 men. Basnet conceded two yellow cards in two injury-time minutes.

With the win, Brigade climbs up to the sixth place with two wins and two losses. It has accumulated six points. Likewise, Himalayan Sherpa struggles in the 11th position after failing to win its first four league games. It has lost two and drawn two, garnering two points so far.

On Wednesday, Sankata Club and Nepal Police Club will take on each other, before the game of the week between Tribhuvan Army Club and Three Star Club is played.

Revenue collection from mountain climbing doubles this year
11 minutes ago