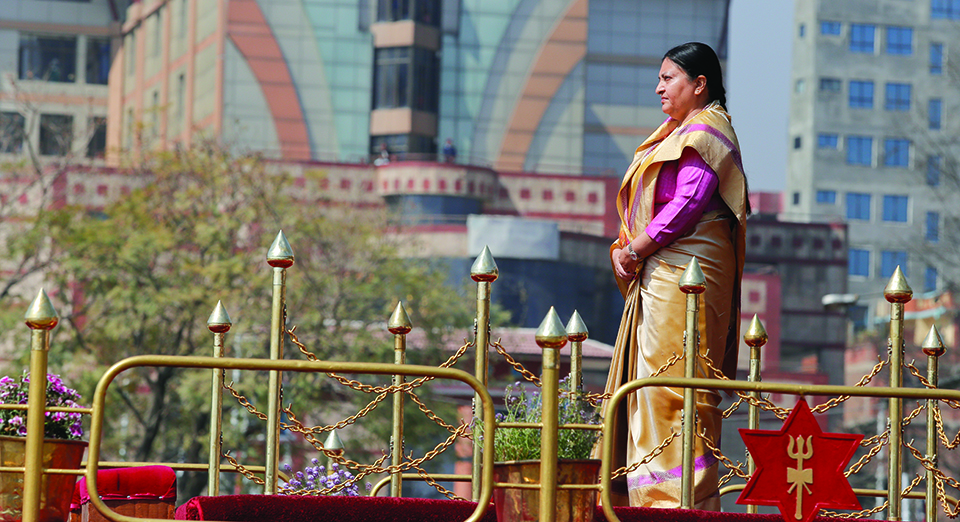 How do we explain President Bidya Devi Bhandari’s craving for luxury? Is this her obsession with power? Has she started to think of herself in terms of former kings and queens?

Luxurious car for president is the subject of discussion in social media, newspapers and every street and village of Nepal at the moment.  The matter would not have been so debatable if she was not a politician, who once fought for the welfare of the poor people.

One hundred and eighty million rupees is not a big money for the state. But to spend this money for a car or a couple of cars is an absolute extravagance, if you consider the per capita income of the country. Besides, there is no security threat on our president, there is no scarcity of vehicles in the presidential palace and there is no evidence of actual need of such car at present. President is the head of the state and should show example of simplicity to the public.

How much luxurious life a president needs to live? Expensive cars, palatal houses, numerous staffs and servants.  How much is the right amount of need or luxury for the president of Nepal? There can be a debate about this. But president’s facilities should be in commensurate with need, economic development and per capita income of the country. A president does not need to be hungry for luxury. There are world leaders, more famous than our president, who live a very simple life and who have set the example for others to follow.

Take José Alberto “Pepe” Mujica Cordano (known as Jose Mujica), the president of Uruguay from 2010 to 2015. As a president, he used to take only 10 percent of his salary of £ 12000 while per capita income of his country is around $ 20,000. Known as the humblest head of state of the world because of his austere lifestyle, Mujica used to donate 90 percent of his salary to the charities, poor people and small entrepreneurs every month. He refused to live in a luxurious presidential palace and lived in a small farm with his wife just outside the capital city. Thousands of poor Uruguayans could earn their livelihood and launch their own enterprises due to the generosity of the president.

In South Asia, Pakistan’s very rich celebrity and multi-millionaire former cricketer Prime Minister Imran Khan has also set the example. He refused to live in the luxurious prime ministerial residence, use dozens of bullet proof cars and over 500 staffs. He has been staying in a small three-bedroom house with only three cars and less than half a dozen staffs.

Pakistan’s population is nearly seven times as many as Nepal’s and its per capita income is over US$ 5,000. He auctioned the cars and transferred staffs to other departments and saved millions of dollars to the state coffer. Despite his luxurious life style in the past and luxurious villa with many servants and cars, he started a simple life style. “I want to tell my people, I will live a simple life, I will save your money,’’ he once said.  Khan can afford every kind of luxury but he gave up everything after being elected to the post of prime minister. In India Prime Minister Narendra Modi is also known for leading very simple life.

But how do we explain President Bidya Devi Bhandari’s lust for luxury? Is this her obsession with power? Has she started to think of herself in terms of former kings and queens? Or is the most abhorred presidential luxury being guided by her fawning advisors and friends? Or is it the doing of the party (whose cadre she was before becoming the president) which commands two thirds majority in the parliament?

Say no to luxury

How can a woman, who once fought for the cause of commoner, who advocated equality and whose party fought to abolish monarchy, crave for the luxury that used to be hallmark of only royalties? Why cannot she say ‘no’ luxury plan which has earned her public opprobrium and insult? These are the questions everyone is asking at the moment.

Bidya Devi Bhandari is Nepal’s history maker. She is our first female head of the state, a widow of Nepal’s most popular leader, who is known for simplicity and decency.

I want to believe that she, who hails from a simple family background, wants to live like the queen of the past but like a representative of the people.

I refuse to believe that she does not know millions of her citizens are sustaining the country’s economy with their sweat and blood in Gulf and Middle Eastern countries. Thousands of people die every year due to lack of basic needs: food, clean drinking water and medicine. Thousands of others are deprived of basic primary education. How can she have forgotten these truths in few months of becoming the president?

In his world famous short story “How much land does a man need?” Leo Tolstoy mocks at man’s lust for luxury. President should know her limits. Dear President, think of country’s economy, think of the tears and toils of people. Say no to luxury. Remain in the hearts of your people.

Historically, palaces have been a shelter for elements hatching intrigues and conspiracies. Has the republican palace, like the royal... Read More...