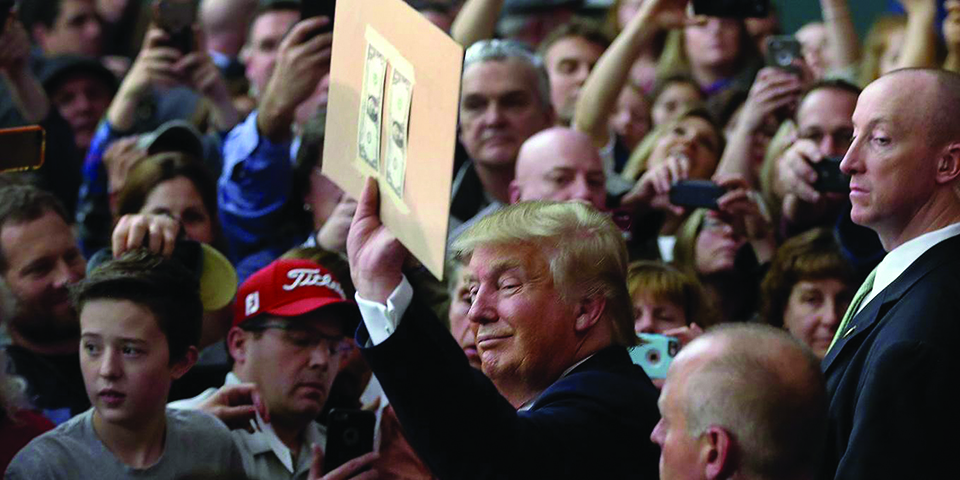 Benjamin J Cohen is Professor of International Political Economy at the University of California, Santa Barbara, and is the author of Currency Power: Understanding Monetary Rivalry.
news@myrepublica.com

Despite dollar appreciation, weak greenback may be in store. Far from making America great again, Trump seems to be hastening its economic decline

SANTA BARBARA – Having gained more than eight percent in value since the start of the year, the US dollar is nearing highs not seen in more than a decade, and market indicators point to even more appreciation in the coming months.

At first blush, this would seem to vindicate US President Donald Trump, who came to office pledging to “Make America Great Again.” A stronger dollar could be taken to mean that his pro-growth economic policies are working. Yet a closer look shows that matters are more complicated; in fact, Trump could precipitate a great decline in the dollar.

For starters, it is not at all clear that Trump can take much credit for the dollar’s appreciation. But even if he could, a strong greenback is not necessarily good for his policy objectives; nor is the exchange rate even an accurate measure of the currency’s true strength.

The Trump administration would like us to believe that the dollar’s rise reflects faster economic growth, driven by the president’s agenda of deregulation, massive tax cuts, and substantially expanded defense spending. After years of mismanagement, we are told, the government has now succeeded in restoring business confidence; America is finally living up to its potential.

But most knowledgeable economists would attribute the dollar’s appreciation to rising interest rates. In an effort to head off inflation, the US Federal Reserve has already increased its federal funds rate twice this year, and signaled two more increases before the end of 2018. When US interest rates rise, more investment capital flows in, driving up demand for the dollar. And right now, money is pouring into the United States from every corner of the globe.

The situation today is not unlike that of Trump’s Republican predecessors. Former Presidents Ronald Reagan and George W Bush also each cut taxes sharply, resulting in budget deficits that prompted the Fed to raise interest rates. In each case, the dollar appreciated dramatically (by as much as 60 percent under Reagan between 1981 and 1985). Today, the Fed is once again acting independently to ward off the inflationary effect of fiscal expansion. Thus, if anyone should take credit for the dollar’s appreciation, it is the Fed.

Nevertheless, one can imagine Trump saying that weaker currencies are for “losers.” And he may brag about the soaring dollar in his ongoing confrontation with Turkish President Recep Tayyip Erdoğan, whose country’s own currency has fallen by almost 60 percent since the start of the year. But while a strong dollar exchange rate might appeal to Trump’s ego, it doesn’t necessarily serve his broader agenda.

After all, a strengthening dollar increases the price of exports abroad and lowers the domestic cost of imports, thus discouraging the former and encouraging the latter. That is directly at odds with Trump’s stated goal of reducing the US trade deficit.

Trump’s obsession with the trade deficit has led him to impose import tariffs on steel, aluminum, and a wide range of products from China. But, ironically, more expensive imports will also put upward pressure on the domestic inflation rate, which could force the Fed to raise interest rates even faster than planned. That, in turn, would produce still more dollar appreciation and even bigger trade deficits, as happened under Reagan and Bush.

Finally, one must remember that short-term movements in foreign-exchange markets are no way to judge a currency’s underlying strength. Longer-term trends in how a currency is used internationally—particularly as a store of value for foreign investors or central banks—are far more telling.

For decades, no currency has been more widely used than the dollar. Owing to its dominance, the US has long enjoyed what former French President Valéry Giscard d’Estaing famously described as an “exorbitant privilege.” As long as foreigners are hungry for dollars, the US can spend whatever it needs to project power around the world. To pay for it all, it need only turn on the printing press.

But Trump’s belligerent policies are putting this privileged position at risk. His protectionist promise to put “America first” smacks of xenophobic nationalism, and his bullying use of tariffs is alienating friends and foes alike. The longer he maintains such policies, the more likely it is that markets will gradually move toward alternatives to the dollar. Eventually, the dollar would slowly bleed out, and America’s exorbitant privilege and global influence would evaporate.

As it happens, China has already convinced Russia to accept the renminbi as payment for natural gas, where once it made such purchases only in dollars. And, more recently, China has started preparing the way for purchases of imported crude oil in renminbi. For example, earlier this year, it launched a new oil futures market in Shanghai, which seems intended to establish a renminbi-denominated price benchmark alongside Brent and West Texas Intermediate crude. If successful, the Shanghai market could trigger a shift of payments for other traded commodities as well—all at the dollar’s expense.

Likewise, a number of countries are looking for ways to circumvent the Trump administration’s sanctions on Iranian oil producers. India, for example, already pays for some Iranian oil with commodities rather than dollars. And both Russia and China have been investing heavily in gold to reduce their reliance on dollar-denominated reserves. Between them, the two countries have already bought some 10 percent of all the gold available on the world market.

So, despite today’s dollar appreciation, a weakening greenback may be in store over the long term. Far from making America great again, Trump seems to be hastening its economic decline.

Benjamin J Cohen is Professor of International Political Economy at the University of California, Santa Barbara, and is the author of Currency Power: Understanding Monetary Rivalry.

Nepali rupee weakens to a six-month low against US dollar

KATHMANDU, Oct 7: The Nepali Rupee on Thursday depreciated to a six-month low against the US dollar with Nepal Rastra Bank... Read More...