Locals work together to build road on their own 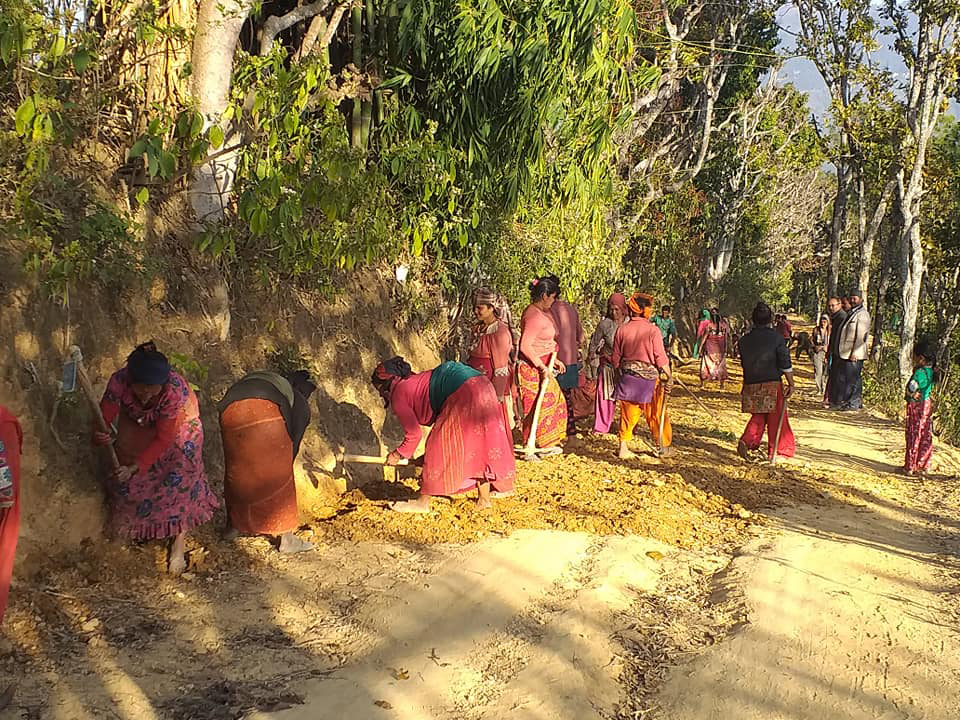 Locals of Pyuthan Municipality-3, Sepung, building a road on their own.

PYUTHAN, March 17: Pyuthan is the oldest and one of the most well-facilitated municipalities of the district. However, there are some villages in the municipality, which are yet to be connected to roads. Some of the roads which were constructed years ago are now in a dilapidated state. Instead of waiting for the local unit or the government authority to construct the roads, locals of Pyuthan-3, Sepung, have started constructing their roads using traditional equipment.

The locals do not have dozers or excavators but that did not stop them from constructing a road for themselves. Carrying spades and other equipment they started digging the roads. Recently, government banned the use of dozers for projects with budgets less than Rs 10 million. Therefore, the municipality decided to deploy villagers for the project.

Locals expressed their gratefulness towards Arjun Kumar Kachyapati, mayor of Pyuthan for providing them an opportunity to earn money. These people will be constructing a three-kilometer long road. Once the project is complete, Bijuwar, the main business center of Pyuthan will be directly connected to Sepung.

It has been a week since the construction work began here. This road will also connect Pyuthan with Rolpa. A road was constructed here some eight years ago, but that is now in a sorry state in lack of proper repairs and maintenance. "Vehicles plying that road is a far-fetched dream when people can't even walk on it," said local Tulasa Kunwar, adding, "However, the municipality sanctioned budget for the road and deployed locals."

Sepung's Chairperson Prem Hamal informed Republica that the road would be completed within a few days. Altogether 24 women and 12 men of the village are engaged in the construction work. Elated locals have suggested to the representatives to hand over similar projects to unemployed locals in the future as well."This has not just promoted development but has also provided employment to locals," said ward chief Hamal. According to the locals, they will no longer have to go abroad if they are provided with such jobs in their own places. Both male and female workers receive a wage of Rs 500 per day for digging the road.

With more males going to India and third world countries for jobs, the number of females outnumbers males in the district. "This has offered a respite to the women who wished to manage their household expenses on their own," said Tulasa Sunar.