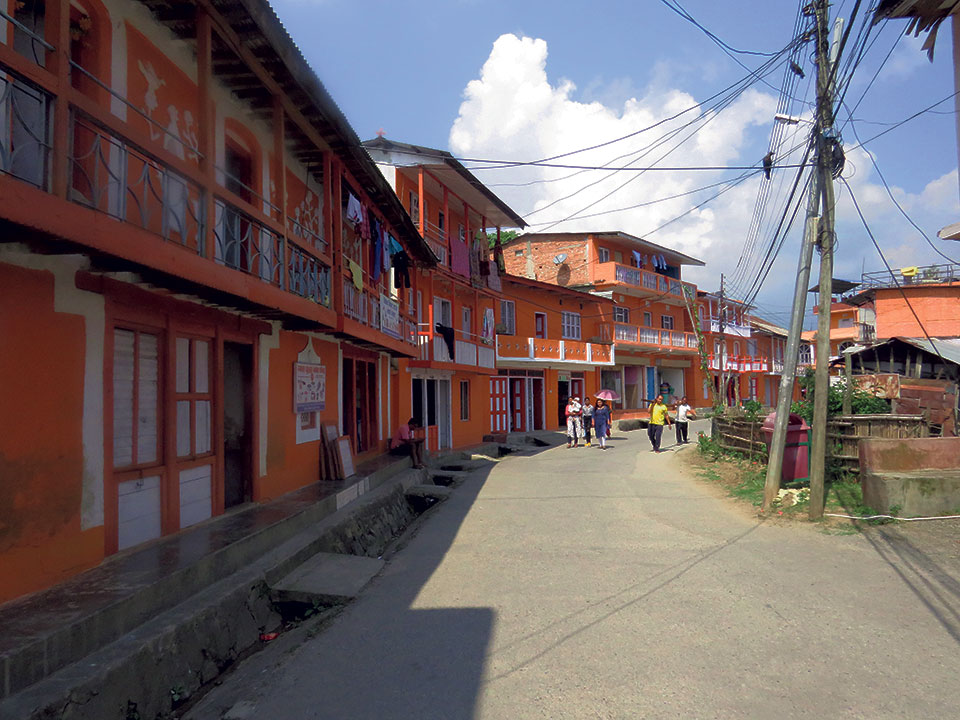 DHANKUTA, Oct 8: Tulsi Bahadur Shrestha of Mathillo Kopche in Dhankuta-5 successfully painted two of his houses orange within two months. As everyone in his locality decided to paint their houses orange, Shrestha made up his mind to do the same. He spent Rs 100,000 for that.

Similarly, Krishna Prasad Guaragain who built his house some 17 years ago has painted it orange right before the Dashain festival, spending Rs 25,000. Not only these two men, but almost all locals of Mathillo Kopche have painted their houses orange on their own.

So far, more than 85 houses of Kopche have turned orange. Without seeking help from any organization or government authority, the locals have taken this initiative. Bal Kumari Shrestha of the locality says more people have started visiting their locality which looks like an 'orange city'. "People have started visiting our locality for clicking photos since we all painted our houses orange," said Shrestha.

Govinda Rai, chairperson of Mathillo Tole Basti Sangthan (MTBS) stated that the purpose of painting all houses orange was to impart the message that all religions, castes and groups are the same. This decision was made two years ago. Dhankuta is known for producing orange; however, the production has decreased in the recent days. According to Rai, the purpose of creating the 'orange city' is to preserve the identity of Dhankuta as the leading producer of orange. Pashupati paints offered 40% discount to the locals after the entire settlement agreed to paint their houses.

MTBS is also planning to construct an entrance gate and Ma statue of an orange at the settlement. On the occasion of the environment day, MTBS was awarded Rs 100,000 for being the best settlement by Dhankuta Municipality.

Possibility of adventure : Tourism in Dhankuta

Dhankuta Municipality is introducing a package of paragliding and rafting to promote adventure tourism in the district. The paragliding route... Read More...

CHITWAN, Oct 4: In an attempt to minimize road accidents during the Dashain festival, authorities have made it compulsory for drivers... Read More...