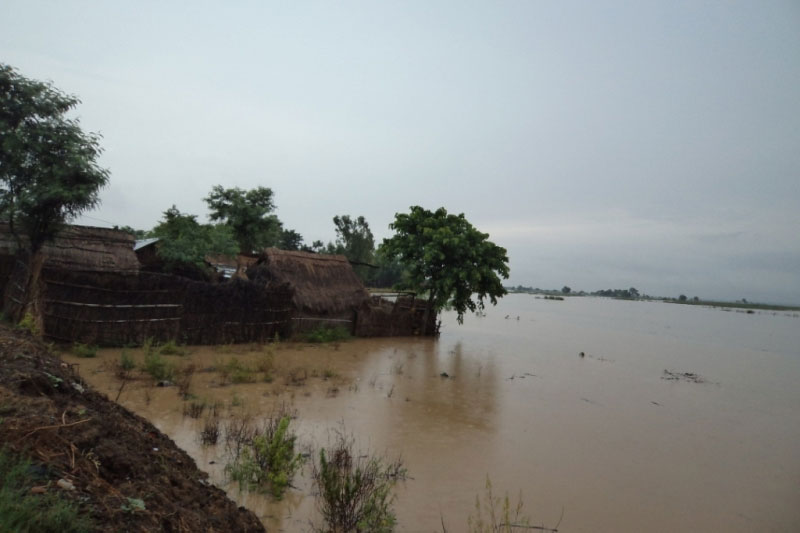 Holiya village inundated by the floods of the Rapti River in Banke district. (Arjun Oli/Republica)

NEPALGUNJ, July 5: The water-level in the Rapti River has gone up due to the incessant monsoon. The local administration has asked the villagers residing near the banks of the river to take caution to prevent themselves from the possible loss of lives and properties.

The locals have already been transferred to a safe area with the help of security personnel. According to the flood measuring device installed in Kusum, the water level of the Rapti River had reached 5.2 meters high at 11 am today.

Bhadra Bahadur Thapa, a staffer at Kusum-based flood early warning station, said he informed the District Administration Office and District Police Office, Banke and the other concerned authorities as soon as the flood reached the danger mark.

“The flood is likely to enter the human settlements when the water level reaches 4.7  meters high,” CDO Rabilal Panthi told  Republica Online.  "We have already directed the concerned VDC secretaries, the local disaster management team and police to do the needful so as to prevent the loss of lives and properties," he added.

“We have already mobilized the police posts and area police offices to shift the locals residing near the banks of the Rapti River to safer areas,” SP Tek Prasad Rai, chief of District Police Office, Banke, told Republica Online.

When there is heavy rainfall in the hilly districts Pyuthan and Rolpa, the water level increases in the Rapti River. Scores of villages are inundated every monsoon due to India-constructed Laxmanpur and Kalakalwa dams that block the natural course of the Rapti River.

ITAHARI, June 22: The water level in the Saptakoshi River has reached at danger mark on Wednesday morning due to... Read More...

COVID-19 spread may accelerate in winter, warn scientists
2 hours ago

Kathmandu district alone has 42.34 percent of total active cases in Nepal
40 minutes ago