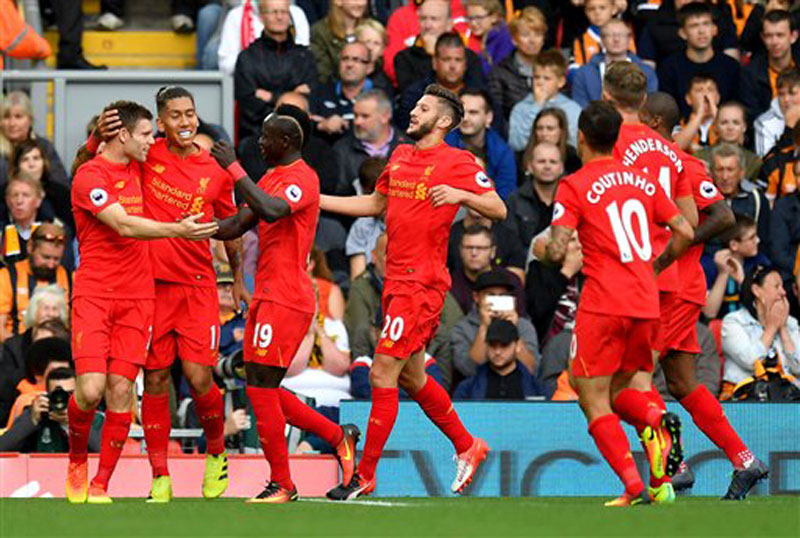 With nine goals in its first two home games, a new-look Anfield is resembling a fortress again for Liverpool under Juergen Klopp.

Liverpool's problem in recent seasons has been putting away the so-called weaker teams, particularly at home, but Hull had no answer to the hosts' waves of attacks, especially after Ahmed Elmohamady was sent off in the 29th minute.

Adam Lallana scored Liverpool's opener in the 17th after being set up by fellow midfielder Philippe Coutinho, whose goal-bound shot in the 29th was stopped by the elbow of Elmohamady — meaning a straight red for the right back. Milner made no mistake from the spot.

Winger Sadio Mane, who had already hit the crossbar, made it 3-0 in the 36th after Lallana spun to earn enough space in the penalty area to slide a pass into his teammate. Mane scored with a shot on the turn.

Hull was playing without a recognized striker in an attempt to stem the tide but still managed to equalize, David Meyler ramming home from a corner just after the break.

Coutinho restored Liverpool's three-goal lead with a dipping 20-meter shot less than 60 seconds later, and Milner scored his second from the spot after Daniel Sturridge was fouled by Andrew Robertson.

Liverpool has 24 goals in eight matches in all competitions this season.

"It was a world-class performance in counter pressing," Klopp said. "We didn't give Hull the opportunity to create confidence. It was wonderful to watch. All in all, really good."

MANCHESTER, Aug 25: Hull started the season as the English Premier League's "crisis club," regarded by some as the worst-prepared... Read More...