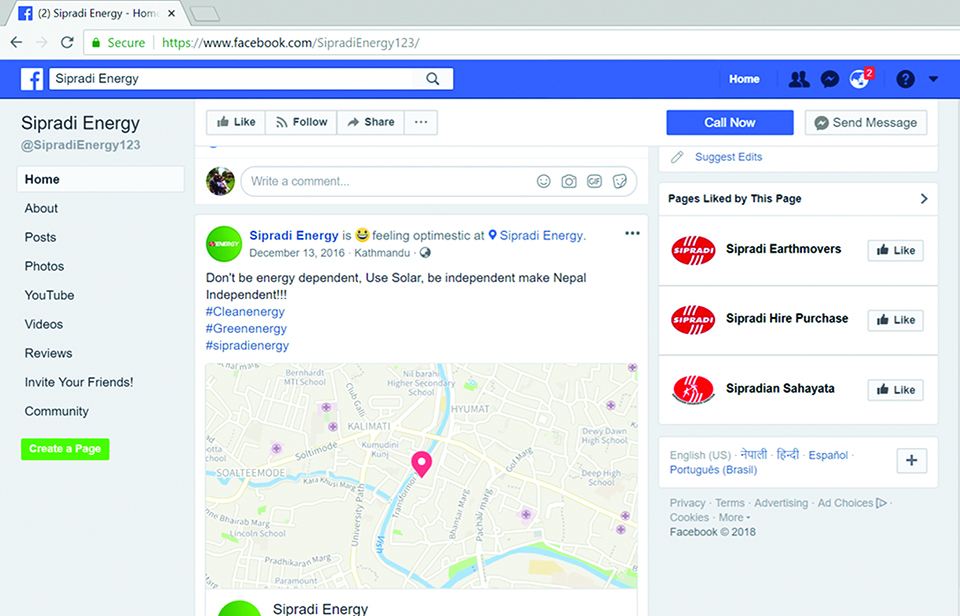 The confluence of policy, business and development aid has created opportunities for short-term profiteering rather than building the basis for lasting progress

Before the end of load shedding, Sipradi Energy was the largest distributed renewable energy company in Nepal. The company was part of the Sipradi conglomerate, one of the biggest private enterprises in Nepal. At its peak, Sipradi Energy sold approximately 200,000 systems (solar coupled with inverters and batteries) annually to millions of Nepali customers.

Customers purchased solar systems with batteries as a response to load shedding. At the same time, enabled by donor funds, the government pushed small solar systems into rural areas with the aim of increasing energy access.

With the end of load shedding, sales of solar systems declined sharply, including at Sipradi Energy. Many companies shut down. Thousands of workers in the sector lost their jobs and livelihoods. Simultaneously, donors withdrew funding from rural renewable energy, further aggravating the decline in sales.

As grid electricity got more reliable and sales of solar systems continued to decline, Sipradi Energy wound down its business. Today, Sipradi Energy is a shadow of its former glory. All that remains of its grand promises to revolutionize the way Nepalis receive electricity is its somewhat (now) ironic postings on its Facebook page: “I love Solar because it’s free and it will never run out.” “Don’t be energy dependent, Use Solar, be independent and make Nepal independent.”

Businesses rise, businesses fall. There is no story in that. But the collapse of Sipradi Energy offers an illuminating look at how the confluence of policy, business and aid is creating opportunities for short-term profiteering and undermining the basis for sustained progress in Nepal.

Three important disclaimers before I proceed with the story.

First, none of the subjects named in this piece have been contacted for this story. Their views were not solicited, no comments were sought. These are my very own personal views and reflections.

Second, I’m not a neutral observer. I work in a distributed renewable energy company, Saral Urja Nepal. I’m a participant in the sector.

Third, I write this piece only because I’m a Nepali. Though this essay is a technical exposition, it underlines a deeply personal story that perhaps reflects the challenges that many young Nepalis face. Everyday in my living room, kitchen and bedroom, I fight a battle to convince my family that there is a future for us and our child in Nepal. So far, it is a battle that I and thousands of other Nepalis are losing.

This story is not about Sipradi. It is about how we can and must reclaim our future.

From the very beginning, Nepal’s renewable energy construct intended to use the private sector as delivery agents. But as donors and government pumped in more money, the program rapidly lost its meaning. Government focused on counting the number of systems that had been delivered. Donors complimented government on those numbers, supplemented of course, with photos of smiling beneficiaries posing next to their solar kit or bio-gas plants.

But the numbers meant little. Motivation for the program had already shifted from providing energy services to buying and selling renewable energy products. Large firms like Sipradi Energy entered the business. They were vertically integrated and did everything: imported products, bid on projects and handled the construction. The business eco-system collapsed as larger firms sucked out profits from across the value chain.

All of this would have been fine. Larger firms needed to be involved. But when sales declined with the end of load shedding, these firms bolted. Without a thriving business eco-system, our ability to learn from and build on our experiences in distributed renewable energy was lost.

No country has expanded its solar business without a reliable grid. The end of load shedding and global innovations on technology offered Nepal an opportunity to renew its focus on solar, diversify its energy mix, improve energy reliability and security. At the dawn of this new horizon, it is a pity we are starting all over again having lost two decades of experiences.

A few years ago, Sipradi Energy won a large multi-million-dollar government contract to supply micro-solar home systems. The price that Sipradi offered was stunningly low. How was it possible? They have a unique supply chain in China, I was told. I had worked with such products around the world. The quality and standards that Sipradi offered, I was confident, would shake the sector globally.

Finally, homegrown innovation from Nepal that could be taken globally. Everywhere, innovation is often financed by public money. This was no exception.

Government spent several million dollars on that contract. Hundreds of thousands of solar systems were distributed across the country. Where is that innovation today?

As Nepalis, we should ask not for the accountability of how those funds were used. We should instead demand for the innovation that government paid for and Sipradi Energy reportedly achieved. That innovation is what we need to build on. That is our future.

Businesses have a right and an obligation to earn profits. But as recipients of public funding, whether it is in delivering a product or service, businesses must also demonstrate greater commitment to the broader intended impacts of that funding. It is unfair, as Sipradi did, to make money and then leave when the larger purpose of the renewable energy program was to integrate solar more deeply within Nepal’s broader energy mix.

The failure of government and donor funding to translate experiences and impacts from its programs into a basis for lasting progress is why our futures are at stake.

Let’s get back to the solar story as an illustration.

Many public institutions in Kathmandu have installed solar roof-top with funding received from government or other donors. International Centre for Integrated Mountain Development (ICIMOD), Commission for the Investigation of Abuse of Authority (CIAA), Teaching Hospital, Dhulikhel Hospital, 1 MW roof-top on Singha Durbar are some examples. There are plenty more. But these examples are not enabling progress.

Despite many solar-rooftop projects funded by public money, the understanding for integrating solar-roof top into the grid through net metering remains weak within the government and Nepal Electricity Authority (NEA). Technical concerns over safety, program design and economics continue to stall progress on implementation even though these are all things that have adequately been addressed in the systems that have been installed.

This year, Nepal will spend approximately 20 billion rupees on electricity imports from India. At the same time, there are approximately 30-40 MW of solar roof-tops installed during the load shedding time that are now stranded in Kathmandu city alone. There is probably at least a 100 MW across the country. If integrated into the grid through net metering or other means (eg, feed-in tariffs), Nepal could help offset some of the Indian electricity imports.

Companies that installed these systems, government and donors that financed these systems with public money and the beneficiaries that received these systems: Shouldn’t they all have a responsibility to ensure that these systems are integrated and used in the national grid in a way that, as Sipradi proudly wrote in its Facebook post, makes “Nepal independent?”

“Every movie is a learning experience”