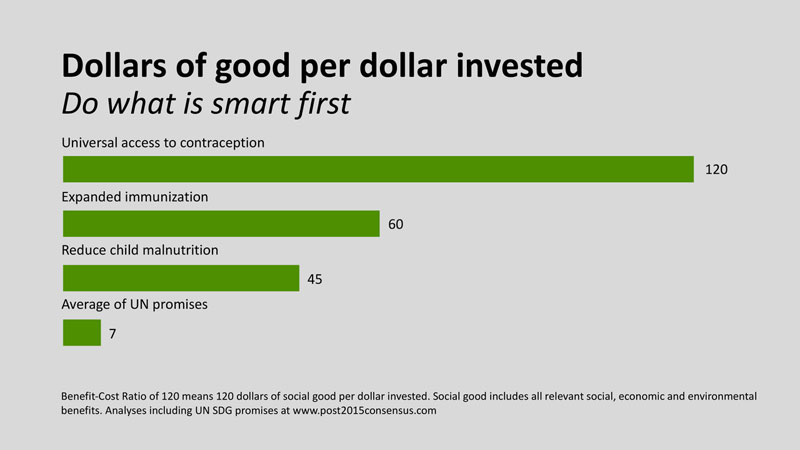 The success of Bill & Melinda Gates Foundation suggests if we can’t fix everything at once, we should start where we can do most good
Everyone—from elected officials and bureaucrats to voters and taxpayers—can learn from the world’s largest charitable foundation about effective development spending. And these lessons are particularly relevant at a time when 56 percent of Europeans believe their governments should focus solely on domestic issues and let recipient countries deal with problems as best they can (opposition to aid is even higher in France, Poland, Italy, Hungary, and Greece).

The United Kingdom’s largest-circulation Sunday newspaper recently launched a petition calling for an end to ring-fenced aid spending (worth 0.7 percent of national income). Prior to his election victory, US President Donald Trump railed against “sending foreign aid to countries that hate us,” reflecting a widespread belief that aid needs to be cut. The United States allocates less than 1 percent of the federal budget to aid, but the average American believes this figure to be thirty-one-times higher.

The Bill & Melinda Gates Foundation spends more each year on development aid than most rich governments do. Unlike elected governments, which face competing priorities, ranging from diplomatic concerns to taxpayer sentiment, the Gates Foundation can focus on what works best. This is nowhere clearer than in Bill and Melinda’s just-released annual newsletter, in which they explain to businessman Warren Buffett how his US $30 billion pledge to their foundation—the biggest single gift ever given—is being spent. They zero in on three specific investment areas: vaccination, contraception, and nutrition.

All three have been studied in-depth by specialist economists for my think tank, the Copenhagen Consensus Center, which researches interventions and policies with the greatest potential to improve the world.

Investment in vaccination is a no-brainer. Coverage for the basic package of childhood vaccines is now the highest it’s ever been, at 86 percent. Most children in the world are now protected against measles, tetanus, whooping cough, diphtheria, and polio, saving around three million lives a year. The gap between the richest and the poorest countries is the narrowest it’s ever been.

But there is still much more to be done. Copenhagen Consensus researchers calculate that for about $1 billion a year, vaccination programs could be expanded to prevent childhood pneumonia and diarrhea, saving an additional one million lives annually. This research shows each extra dollar spent on these vaccines will generate $60 worth of human welfare. As Melinda Gates puts it, saving children’s lives is “the best deal in philanthropy.”

Contraception is another area where the figures speak for themselves—and where there has been considerable progress, in no small part because of the Gates Foundation’s leadership. But more than 200 million women still lack access to modern contraception. Achieving near-universal access to family planning would carry an annual price tag of $3.6 billion; but allowing women more control over pregnancy would mean 150,000 fewer maternal deaths and 600,000 fewer orphaned children, while the demographic dividend would boost economic growth. The benefits to society are worth 120 times the cost.

Improving nutrition for a child is also a remarkably good investment. Stunted children don’t just fail to thrive physically; they also fall behind their better-fed peers in developing cognitive skills. They perform worse in school and lead poorer adult lives. Feeding infants well starts a virtuous circle, with increasing benefits for succeeding generations. The cost-benefit analysis shows that every dollar spent on nutrition interventions in the first 1,000 days of a child’s life can return benefits worth around $45. In some nations, this return can be as high as $166 per dollar spent.

The analysis for Copenhagen Consensus shows that each dollar of Warren Buffett’s money spent by the Gates Foundation on vaccination, contraception, and nutrition is generating a return worth $45-120. Buffett is famous for his canny investments, but such a return—in development terms—is as phenomenal as any business achievement.

Herein lies the lesson for governments. The Gates Foundation has a sharp-eyed focus on powerful investments that can achieve astounding results at low cost. If we can’t fix everything at once, we should start where we can do the most good.

Contrast this with the United Nations’ approach to development. Its Sustainable Development Goals (SDGs)—the important agenda that will shape the allocation of trillions of dollars of spending on government aid over the next 15 years—include an unmanageable 169 complex development targets.

To be sure, nutrition, immunization, and contraception are covered in the SDGs. But they are lost among a plethora of other targets that get so detailed—and off-topic—that they mention the importance of sustainable tourism and inner-city garden access for disabled people. These certainly are important topics; but the SDGs are supposed to provide signposts to the most vital investments. On this score, they fail.

That failure gives real reason for concern, because focusing on the areas that make the most difference means more lives saved. The SDGs replaced the Millennium Development Goals, which comprised eight clear, simple promises such as halving global poverty, reducing child mortality, and getting children into school. The MDGs saved at least 21 million lives.

It would be reductionist and wrong to suggest that the private sector succeeds at development aid and the public sector fails; many of the Gates Foundation’s greatest successes have resulted from partnerships with governments. But the most compelling argument for sustaining and increasing spending on development aid is to focus on the best investments first. The Gates Foundation’s approach should be an inspiration.

The author is Director of the Copenhagen Consensus Center