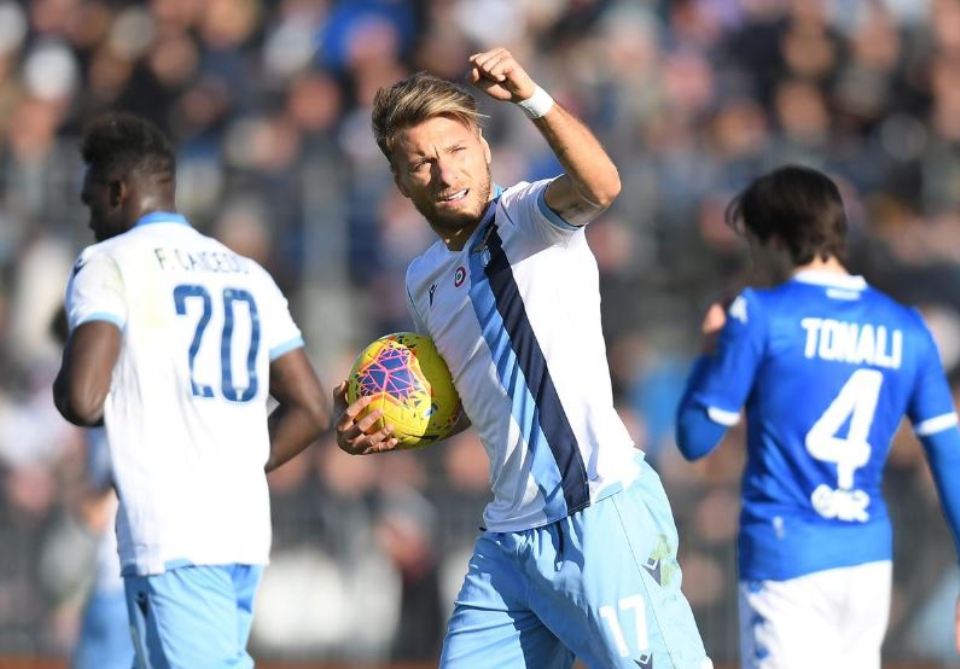 The match was marred by insults aimed at Brescia striker Mario Balotelli, who said afterwards the visiting Lazio fans should be ashamed of themselves.

Lazio overcame the absence of several key players as they cut the gap between themselves and leading pair Juventus and Inter Milan to three points after scoring an injury-time winner for the third straight away game.

Juventus and Inter, who each have 42 points from 17 games, both play on Monday, while Lazio, with 39 from 17, have an outstanding fixture at home to Verona to come in early February.

The only other time Lazio won nine league games in a row was in 1998/99 under Sven-Goran Eriksson.

Lazio had to reshuffle their midfield as Lucas Leiva and Luis Alberto - their key assist-provider this season - were both suspended, while Danilo Cataldi was not fully fit.

Lazio forward Felipe Caicedo netted from close range after seven minutes but saw his effort ruled out for offside, then Senad Lulic struck the post.

However, Brescia, who have enjoyed a new lease of life since Eugenio Corini was recalled as coach in December one month after being sacked, went ahead with a Mario Balotelli volley in the 18th minute, his first home goal since joining his hometown club this season.

Shortly afterwards Balotelli complained to the referee about insults from the Lazio fans and an announcement was made telling them to stop. “Lazio fans present at the stadium today, shame on you,” he wrote afterwards in Instagram.

Lazio levelled after Andrea Cistana fouled Caicedo and was sent off for a second bookable offence. Immobile converted the penalty in the 42nd minute despite not connecting cleanly.

The visitors struggled to break down their 10-man opponents in the second half but yet again won the match at the death as they did in matches away to Sassuolo and Cagliari.

A long ball was floated into the Brescia area and Caicedo laid it off to Immobile who scored his 19th goal of the season.

“Our main interest is to continue improving every day,” said Lazio coach Simone Inzaghi. “Of course, after these wins, we expect a bit more but we know the Italian league is very difficult.”

Former AC Milan and Inter Milan forward Giampaolo Pazzini scored in the 14th minute to set Verona on the way to a 2-0 win at lowly SPAL in a later game.

SPAL had Nenad Tomovic shown a straight red card for a reckless challenge in the 39th minute and Mariusz Stepinski scored from a rebound four minutes from the end to seal the points for Verona.