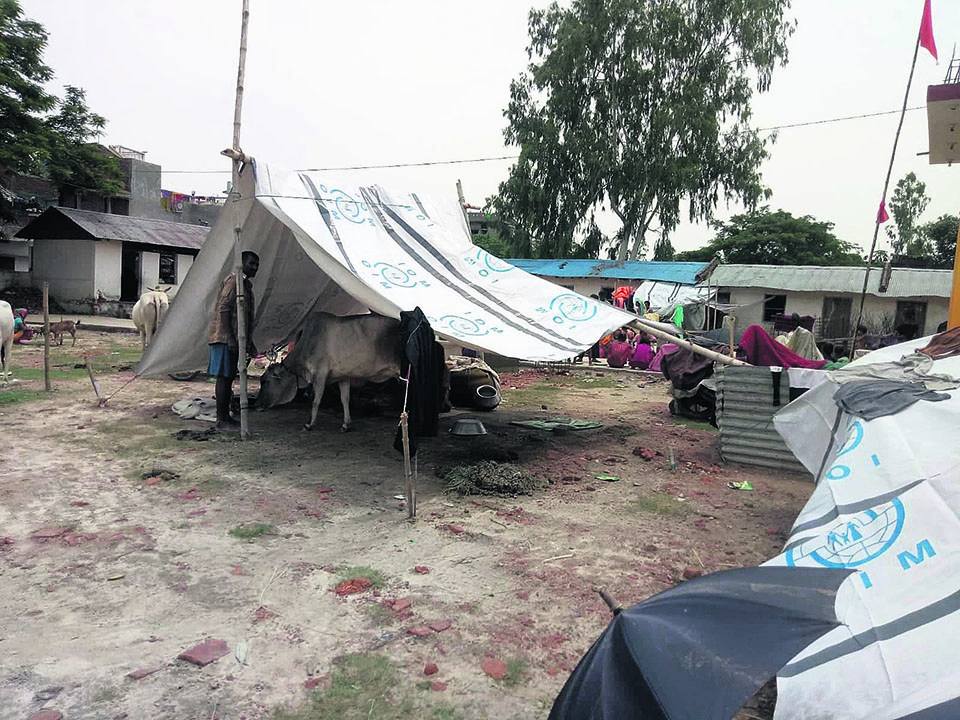 A flood victim checking his cattle kept under tarpaulin in Mahottari district following the recent floods.

JANAKPUR, July 16: Following the havoc wreaked by the recent floods in eight districts of Province 2, some political party leaders have visited the incident sites to take stock of the situation and distribute relief to the victims. However, most of the leaders are still to reach out to the victims.

Nevertheless, the local government has actively carried out the relief and rescue activities, offering respite to the locals at this hour of need. The victims however are utterly disappointed with the central level lawmakers.

As a representative of the central government, only Rajendra Mahato has reached his election constituency in Dhanusha. Mahato made a field visit for observation on Sunday. After seeing the misery of the victims, lawmaker Mahato urged the concerned authorities to manage relief and returned back to Kathmandu. As per the details provided by the District Police Office (DPO), Dhanusha, altogether 3,177 houses were inundated in the district by the flood originated from rivers like Kamala, Charnath and Jalad.

While the residents across 15 local units of Mahottari are terrorized by the ravaging floods, no lawmaker elected from the district has paid heed toward solving their problem and providing them relief. The victims are largely disappointed by the ignorance shown by the lawmakers who made several pledges during the elections.

In Siraha as well, lawmakers are yet to reach the incident sites affected by floods and inundation. Hundreds of families have been rendered homeless here. Chief District Officer (CDO) Gopal Kumar Adhikari informed Republica that the local unit is managing food and shelter for the victims currently.

"The lawmakers have expressed their wish to provide relief to the victims but have not provided it yet. Maybe they are making some arrangements," said CDO Adhikari.

In Parsa, the victims are longing to see lawmakers who had made lofty promises to them during the elections. Lawmaker Pradip Yadav who was elected from constituency no 1 has been spotted at the doorsteps of the victims since the last three days. But the lawmakers elected from other three constituencies have not reached the district yet. Issuing a press statement, Yadav announced to provide his one month's salary to the District Disaster Management Committee (DDMC).

In Sarlahi, the local units have started to distribute relief in flood-affected areas. Federal lawmakers, however, have not yet reached to their home constituencies. Balara and Malangawa rural municipalities and Dhankaul, Ramnagar, Basbariya, Kaudena rural municipalities are affected the most in the district.

“We have purchased 1000 pieces of tarpaulins and will distribute them from tomorrow,” said Ram Ashraya Sah, chief of Dhankaul Rural Municipality, adding, “We distribute beaten rice and dry food in some wards and will reach out to the remaining wards tomorrow (Tuesday).”
Chief District Officer Krishna Bahadur Raut said the local units have already started distributing relief. The relief distribution was affected by disruption in communications in the district, said Raut.
Influential lawmakers representing the district such as Amaresh Kumar Singh, Rameshwar Raya Yadav are still in Kathmandu.

“The provincial government has released Rs 1 million to each district affected by the flood for now. We will release additional money for relief and rescue operations if needed,” said Minister Sah.
Another provincial minister Nabal Kishwar Sah also visited the flood-affected areas in the district. Apart from the aforementioned two ministers, no federal lawmaker representing Saptari district has reached the district.

Unlike other districts, lawmakers elected from Rautahat have visited flood-affected areas. Federal lawmakers from Rautahat including Anil Kumar Jha, Prabhu Sah and Devendra Prasad Timalsina visited the field. They coordinated to distribute cooking gas cylinders, tarpaulins and food to the victims of Maulapur, Debahi, Jayanagar and other places of the district.

Govt decides to provide Rs 200,000 as immediate relief to the family of those killed due to flood and landslide

KATHMANDU, Oct 30: The government has announced to provide Rs 200,000 as immediate relief to the family of those killed... Read More...

RAJBIRAJ, July 18: A jumbo team of sitting and former ministers on Wednesday visited the flood-hit areas of Saptari to... Read More...

KATHMANDU, July 29: Citizens, organizations and groups are jumping in to help the floods and landslides affected people in various... Read More...

All IOM exams for Monday postponed
49 minutes ago

SEE and Grade 12 exams in April and May, respectively
51 minutes ago

Sita Dahal inflicted with COVID-19, kept in ICU
53 minutes ago