KATHMANDU, Sept 23: The last rites of legendary climber Ang Rita Sherpa, who passed away on Monday at the age of 84, were performed in Kathmandu on Wednesday.

He was laid to rest with state honors at Teku Dovan this morning. 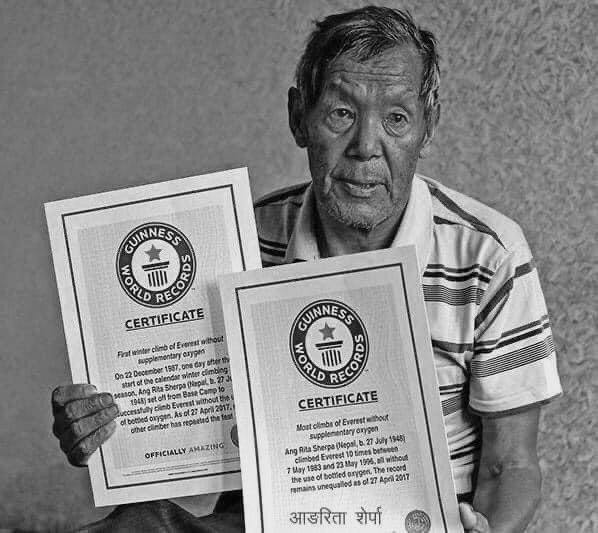 Earlier on Tuesday, the government had decided to perform the last rites of the legendary climber with state honors.

Nepal’s legendary climber Ang Rita -- popularly known as 'Himchituwa' (snow leopard) for his 10 Everest ascents without supplemental oxygen – died at the age of 84 in Kathmandu. He was suffering from brain stroke and liver ailments.

In April 2017, Sherpa had undergone treatment at Neuro Hospital in Bansbari, Kathmandu, after he suffered a brain stroke. His health condition was still critical as he had blood clots in his brain and also problems in his liver, according to former president of Nepal Mountaineering Association (NMA), Ang Tshering Sherpa.

The NMA was bearing all treatment costs for ailing Ang Rita after his health condition worsened further following the death of his eldest son in 2012.

Born to a middle-class family in Solukhumbu, Ang Rita was a giant in Nepal’s mountaineering. He is survived by two sons and a daughter.

The mountaineering legend was awarded the prestigious Guinness World Record certificate for making the most number of successful ascents on Mt Everest without using supplemental oxygen.

KATHMANDU, Sept 22: The government has decided to perform the last rites of the legendary climber Ang Rita Sherpa, who passed... Read More...

Ang Rita Sherpa, the only person to conquer Mount Everest 10 times without supplemental oxygen, was born on July 27,... Read More...